Some friends recently were saying my examples of KKK signaling in the open are just a theory. It’s true, I am proposing theories meant for dialogue, rather than saying I’m the final word on fascist fashion.

Nonetheless, hidden signaling by hate groups is a very real thing. It takes training and some careful observation to reveal the obfuscated messages without looking like you’ve lost your eyesight or joined groups on the wrong side of history. Trust depends on establishing some clear explanations for the hidden signals.

PBS NewsHour profiled a woman volunteering for the campaign who had prominently visible tattoos of widely recognized white power symbols. In the segment, which was first flagged by Gawker, PBS profiles Grace Tilly, who is shown making calls at a Trump campaign phone bank in North Carolina.

Her symbols were a Celtic Cross and the number 88. Would you immediately recognize those as entries in the hate symbols database? Here’s another example:

I’m definitely not the first to write publicly about Nazi t-shirts designed to hide in plain sight.

Recently a man proud to be a descendant of Nazis sent me the following Mel Magazine article detailing Neo-Nazi apparel and provocatively asked if there was anything I would like him to send me for Christmas:

At a cursory glance, the T-shirt looks like an ad for Sea World. An orca, triumphantly jutting out of the sea, splashes water above the words “Antarktis-Expedition.” It takes just a second longer to notice the bold text hovering above the orca: “Save the White Continent.” The shirt was created by the German label Thor Steinar, one of a few clothing brands that cater to neo-Nazis. Like Ansgar Aryan and Erik and Sons, Thor Steinar uses coded references to obscure events in Nazi history, veiled threats and playful imagery to flout German hate-speech laws, which forbid explicit references to the Third Reich.

And I’m not kidding, I really was offered this garbage as a holiday “gift” from a “Nazi family”.

So let’s just say I’ve been, and remain, in the right circles to know when I see something fishy (both puns intended). And that is why, while walking through an airport the other day, I could not help but notice someone wearing a giant 5th SS Panzer-Division symbol on a T-shirt.

First, I will explain the Nazi symbolism I am referencing. There are three parts: the SS, the Wiking and the Panzer-Division. An easy way of explaining these three symbols is to look at the marketplace of Neo-Nazi merchandise. 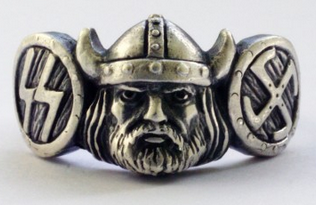 You perhaps can see how a SS, Wiking, and Panzer-Division ring has been segmented into the three parts around the finger, which makes it kind of unwieldy, gaudy and large.

Now I will explain these three symbols on the ring, left to right:

Here’s an example of a Sonnenrad on a Panzer III of the Wiking division in June 1942, for some historic perspective, as it rolls towards committing crimes while losing the war: 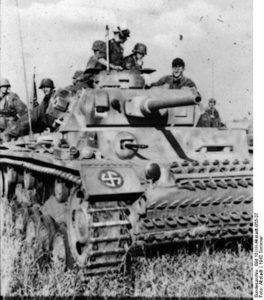 And here is a pamphlet from the same time period 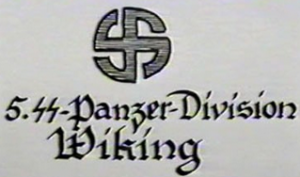 Second, I was walking through an airport just the other day when to my great surprise I saw someone wearing a Nazi symbol. 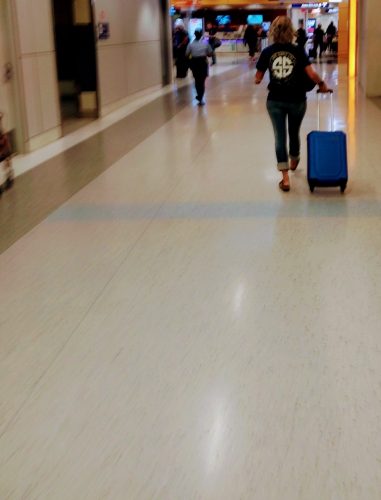 And here is a closer view, where a 5th Panzer symbol becomes less clear as a Nordic-looking SS becomes more apparent. Unlike the ring, however, three symbols have been combined into a single giant one. Not what I was expecting. I had to find out who was wearing this thing and why.

Most people I’ve explained this to call it an unfortunate oversight, or poor (ignorant) choice in design.

One guy thought it couldn’t possibly be intentional as the words surrounding the “Nazi rune” (his words) were so peace inspiring. I found that logic to be a bit like saying a hunter isn’t going to shoot a deer because a camouflage suit seems so nature-loving.

And Nazi propaganda cells convinced groups of Americans to protest for peace with Hitler, giving him little or no resistance, even during WWII. Note how “America First” disinformation campaigns now are described by historians:

Hitler’s dictatorship repudiated both democracy and human rights. The Nazi empire was the arena in which Hitler’s master race philosophy was to be put into practice. Censorship prevented the German press from exciting the conscience of the nation. There could never have been a successful passive resistance movement against the Nazis. The inability of members of [America First] to recognize this, especially men like Hutchins of Chicago, and Norman Thomas, is remarkable.

Inability of Americans to recognize harms from promoting Nazism definitely is remarkable, then and now.

Here’s a good example: US Marines feigned ignorance recently after posing with a giant SS flag they bought online from an obvious Nazi memorabilia site.

Everyone knows those US Marines were lying about their Nazi SS flag to avoid responsibility for it:

There are also a whole bunch of articles with titles like “Marines: Nazi flag was mistaken for their own,” since the Marine Corps’ official excuse is that the use of the flag was just a naive mistake on the part of Marines who didn’t know what the flag was and just thought the SS stood for Sniper Scout. Really? And just how does someone go about buying a Nazi SS flag without realizing that it’s a Nazi SS flag? Well, I spent hours yesterday afternoon and last night trying to do just that, scouring the web for an SS flag that could be bought by mistake. And, big surprise, I couldn’t find a single place where an SS flag wasn’t very clearly being sold as what it is — a Nazi flag.

Posing with Nazi SS flags today is not entirely unexpected, either. It can be a sad reminder of 35 years ago in 1976 when US Marines harbored domestic terror groups (KKK), then protected and hid them when confronted by anti-racist soldiers.

That’s right, the US Marines confronted with obvious KKK evidence denied the domestic terrorist group had infiltrated their ranks and then instead prosecuted the soldiers pointing out how obvious the KKK were being.

Let’s take this even deeper into American military history. It’s probably fair to say these anecdotes about the Marines are almost as bad as the inability of Americans to recognize harms from promoting symbolism of white-supremacist “Confederate” states.

Keep in mind that Nazi Germany drew ideas from an American Civil War that had been started to expand slavery. Nazis looked at America’s Jim Crow laws as inspiration for their development of Nazism.

When we talk about Nazi symbolism, we’re looking for indications of people who align positively with America’s pattern of genocide and systemic racism. Knowing American history thus can set the stage as a sort of blueprint for crimes against humanity.

Think for a long minute why the black American soldiers who were sent to Nazi Germany to ‘promote democracy‘ in the rubble of war were blocked from doing the same thing at home by the forces in America that the Nazis had emulated.

Tying it all together, the symbolism of “Confederate battle” flags wasn’t an issue in America after the Civil War because they were never used again, until… once the Nazis were defeated they needed a new flag to continue their fight. This is why Americans started flying “Dixie” flags after WWII ended, to obfuscate ongoing support for the principles of Nazism, which of course mirrored Confederate ones.

Suddenly a racist flag became popular in 1948 — KKK/Nazis shared a symbol to represent their continued war against American democracy and freedoms. 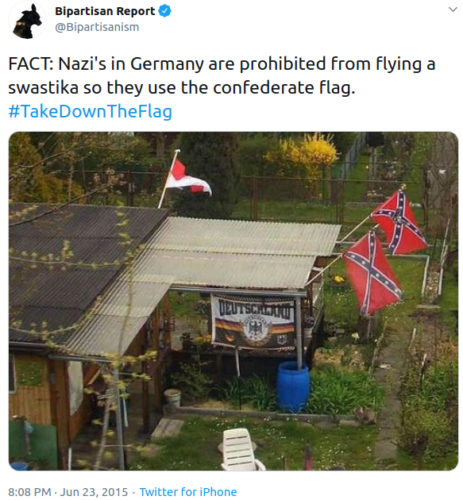 Here’s a good example: Georgia in 1956 added the battle flag of the enemy of America to their own flag. They couldn’t put a Nazi symbol on it, because that still would be too obvious in 1956. Instead they used the Confederate Battle flag that symbolized Nazism, and promoted viciously killing hundreds of thousands if not millions of Americans.

More to the point, and much earlier in 1890, Mississippi re-wrote their constitution in order to purge all blacks from their political system. Next the white supremacist state government in 1894 secretly pushed the Confederate battle flag back up their flagpoles to declare they were not ending a state of war with Americans.

With all that in mind, of course I had to walk up to this woman in an airport wearing obfuscated white supremacist imagery and ask her “what’s with wearing a giant Nazi symbol?” She gasped for air and said “Oh no. Oh my god. Don’t look. I don’t mean to offend anyone” and then quickly turned and walked away.

Let’s be clear here about the company she bought the shirt from. Simply Southern (SS) is based in North Carolina, just like that racist Republican phone bank worker Grace Tilly I mentioned at the beginning of this post. Perhaps Grace, or her family, even worked there and designed T-Shirts for them.

The company describes itself as a “brand to reflect the values of a southern lifestyle“. They don’t define those values so the reader is left to wonder if they reject the bad ones. In their “giving back” section of the website also they curiously depict black children next to marine animals.

I’ve written before about this kind of “giving” imagery.

So after greater scrutiny, what’s your call?

A reader pointed out that fascists couldn’t pass up a free “patriot” t-shirt offering, which only displayed a hidden anti-fascist message when they wore it in heat.

The t-shirts were advertised as patriotic t-shirts, but actually pointed out that “St George was Syrian” when worn. The heat-activated message included the hashtag #DefendDiversity. A spokesperson for the charity Tell MAMA said: “The St George’s cross has become an icon of far-right xenophobia. Somewhat ironic considering St George had Syrian, Greek, Turkish and Israeli heritage. We distributed t-shirts to far-right nationalists celebrating St. George’s Day. When they proudly donned their new t-shirts, little did they know that their body heat triggered the message to appear.” 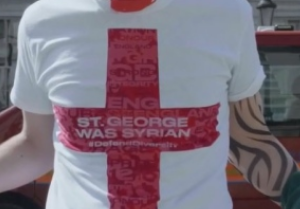 Also the Economist has published an expose of Hawaiian shirts as a new signal by fascist groups in America, which reminded me of The Secret History of the Banana Split. 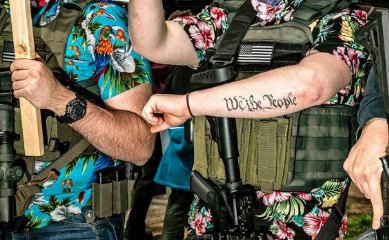 And as it turns out, because a white hood or swastika is so well known, hate groups wear a “Red Hat” as an anagram of “HATRED” 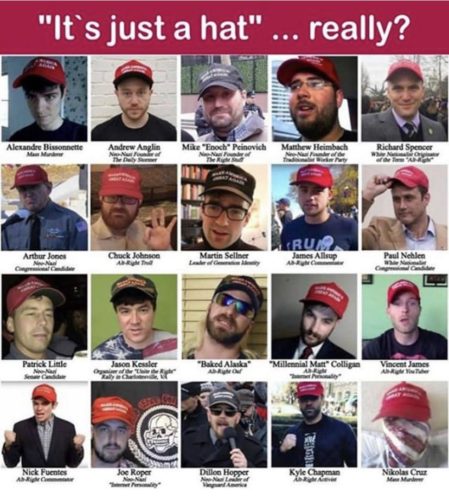