The latest EPRI* Journal (PDF) has an interesting article about the future of hybrid vehicles and the benefits of new plug-in technology, which has led to the ungainly name of PHEV (Plug-in Hybrid Electric Vehicles). New York, Kansas City and LA are apparently testing a Dodge Sprinter PHEV and seeing some pretty amazing results.

At current U.S. energy prices — that is with the cost of gasoline at $3 per gallon and the national average cost of electricity at 8.5c per kilowatthour — a PHEV runs on an equivalent of 75c per gallon. And given that half the cars on U.S. roads are driven 25 miles a day or less, a plug-in with even a 20-mile-range battery could reduce petroleum fuel consumption by about 60%.

A PHEV passenger car is said to be able to recharge in three to four hours on a regular 120V (well, regular for the US) outlet, and ideally would be charged at the end of the day when “40% of the generating capacity in the United States sits idle or operates at reduced load overnight.”

I hate to ask but will the diesel version of the Sprinter (based on the Mercedes engine) have a PHEV option? The electric-city/biodiesel-highway vehicle seems like the perfect high-performance low-cost solution to help drive the US economy and military away from the impending petroleum disaster.

Here is one of the graphs from the report, which actually mentions increasing security risks due to petroleum-based energy:

The BBC report about this massive catastrophe starts off rather ominously:

The man in charge of investigating the massive fires at a Hertfordshire oil depot on Sunday says the flames may have destroyed all clues to the cause.

Further along it adds a bit more hope:

A police investigation into the incident has begun, including investigations by anti-terrorist police.
But Chief Con Whiteley said there was “nothing to suggest anything other than an accident”.

In a classic risk matrix the volatility and demand for petroleum is going to continue to add significant security costs. The value of the fuel has skyrocketed, the threats are clearly higher, and therefore the vulnerabilities must be addressed. In this case the vulnerability involved “20 petrol tanks…each said to hold three million gallons of fuel”. Even if you use the American fuel average price of US$2.50/gal that means US$150 million in fuel assets exposed, let alone the equipment value or the cost to the economy when the fuel supply is disrupted and the sky filled with toxic thick smoke.

Compare that to the almost inert properties of stored bio-diesel. Unlike many other forms of stored energy, the pollutive and combustive values of bio-diesel are incredibly low, which makes it a far safer fuel. My sense is that the military is already exploring this for obvious reasons (an ex-SF recently explained to me that the Humvees running bio-diesel are nowhere near as explosive since their fuel tanks can not be “weaponized” by IEDs). From a civilian market standpoint I have to wonder whether the petroleum companies will be able to find a way to reassure their respective governments that they are capable of resolving the inherent national security deficiencies of their industry. Will their record profits be spent on reducing the asset value (lowering the price), reducing the vulnerabilities (lower volatility, build giant fortresses around tanks), or can they help reduce the threats (ban smoking, help stabilize democracies, fund education)? How many people will face serious health risks from the burning petroleum?

We’re reaching a moment similar to when the mid-range systems started to steal cycles away from the highly profitable but totally unflexible mainframe, later to be replaced themselves with personal/distributed computing. Fuel production is ripe for the same sort of reorganization, with more widely distributed cells of production at lesser individual capacity providing a system more aligned with popular values…. 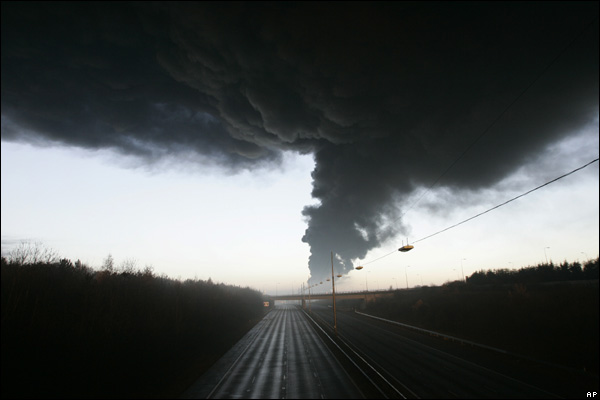 The BBC also reports that “The Buncefield depot is said to supply a third of the fuel for Heathrow. Some aircraft are only being allowed 40% of the fuel they would normally take on board and airport company BAA said restrictions could last some weeks.”

Some say poetry must be read aloud by the author to be properly represented, but the real question of the future for The Poetry Archive might be whether people will pay $0.99 per download. In the meantime they say:

You can enjoy listening here, free of charge, to the voices of contemporary English-language poets and of poets from the past. The Archive is growing all the time. Please come back regularly to enjoy our latest recordings.

This looks interesting. It claims to be a firewall for the masses. A single-button black box with nothing more than input/output to worry about (and pressing the button at the right time, I suppose). I have not seen any reliable test/verification data yet…

This was just posted on Yahoo! News. Apparently the UK was able to push an “anti-terror” agenda through the EU:

The measures would oblige businesses to keep details about callers, such as whom they spoke to, where and when, for between six months and two years. EU states with longer retention periods in place would be allowed to keep them.

The laws would apply to land telephone lines and mobile phones, text messages and Internet protocols. No record of the conversation or message itself would be kept.

EU countries would have the option of keeping information about unanswered calls, details of which proved decisive in the probe into the Madrid train bombings last year.

The conclusion raises a number of interesting questions:

Despite initial disagreement over the scope of the measures, the costs and who should pay them — companies or member states — and the duration of data retention, the deputies passed the measures by a clear majority.

Before the assembly convened in Strasbourg, the leaders of the main political groups had agreed to accept a series of late amendments compiled by EU justice ministers at the beginning of the month.

The author of the report on which the measures were based, liberal deputy Alexander Nuno Alvaro, was angered by the move and denounced what he said was “pressure” on the lawmakers.

He also demanded that his name be withdrawn from the final text.

What was the original text and what were the amendments? Why the rush?