Exposition (qi) was called for in the first two lines; the development of the theme (cheng), in parallel verse structure, in the middle, or second and third, couplets; and the conclusion (he) in the final couplet.

Hundreds of Shangyin poems may be called “Wuti” (無題 – Untitled). It makes for an interesting challenge to select one to read. With that in mind, here is one such “Untitled” poem: number 215 from “300 Tang Poems” as posted online by the Chinese Text Initiative of the University of Virginia

Here is my translation:
The time since she left is hard to bear,
as flowers wither after they lose their petals to the east wind.
Only in death do spring worms stop weaving silk;
as candles provide light while they cry themselves into ash.
Clouds in the early morning mirror reflect her hair changing colour,
the chant of the month feels cold in moonlight.
Magic mountain is near when you see no more road,
pay attention green bird and carry her message to me. For reference, here is the Google Translate output

And here is the translation by Witter Bynner.

Time was long before I met her, but is longer since we parted,
and the east wind has arisen and a hundred flowers are gone.
And the silk-worms of spring will weave until they die,
and every night the candles will weep their wicks away.
Mornings in her mirror she sees her hair-cloud changing,
yet she dares the chill of moonlight with her evening song.
…It is not so very far to her Enchanted Mountain,
O blue-birds, be listening!-Bring me what she says!

NPR attempts to provide a comical and historical look at the problem of data classification, in terms of a debate over singing and speaking

Speak-singing, the murky marriage of spoken lyrics and sung melodies, can be heard in everything from 17th-century opera to The Velvet Underground and the latest Mountain Goats record. On this edition of All Songs Considered, hosts Bob Boilen and Robin Hilton argue over the pros and cons of this polarizing art form and take a look at some of their favorite (and not-so-favorite) speak-singing artists.

Sadly, the show does not mention anything about the history of story-telling and secret messaging through song to circumvent censorship. Their data set for analysis appears to be tiny and they seem to miss the very point of why speak-singers are so effective and important.

I am shocked (pun not intended) that at least one of the punk icons of speak-singing, like Sid Vicious or Henry Rollins are not mentioned, for example. Even more shocking to me is the show does not seem to bring up even one sample or reference to blues, reggae, rap, hip-hop…WTF? How can anyone do a music show on speak-singing and not mention rap?

Southern Californians are known for a love, if not obsession, with spending much of their time holding a steering wheel and staring at the tail lights in front of them. 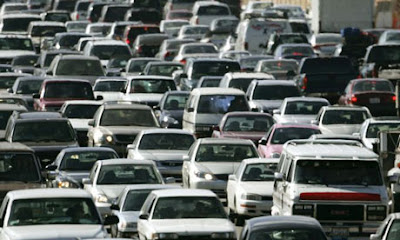 One might think all the time on the road and money spent on cars would mean that risk will decline, but here is some new data that suggests the exact opposite can happen — when it rains:

Some 422 crashes were reported in Los Angeles County between 5 a.m. and 10 a.m., CHP Officer Tatiana Sauquillo told the San Gabriel Valley Tribune. During the same period a week ago, when the weather was dry, 58 collisions were reported, she said.

This is a nice example to pull into information security discussions for at least two reasons.

Second, it is not clear whether this risk was a factor in the decision by those who removed the largest streetcar system in the world and replaced it with asphalt and unprofessional drivers.

Clearly, GM waged a war on electric traction. It was indeed an all out assault, but by no means the single reason for the failure of rapid transit.

Whether or not you buy the conspiracy, or the natural market, argument about technology choices for transportation in Los Angeles there continue to be some very interesting data points related to the study of risk compared with other urban areas. In brief, factors like pride, conformance, convenience, cost, etc. may drive consumers (pun not intended) into positions of higher short-term and long-term risk.

The New Sudan Vision has posted an interesting story about the Language Center for Newcomers (LCFN) in Alberta, Canada and the man who founded it, Michael Nuul Mayena. The LCFN is said to use an insider and peer-based approach to instruction:

…encourages immigrants from every nationality to come and learn the English language without abandoning their native languages. It is why the center also has a literacy program called â€˜immigrants educating immigrantsâ€™, basically allowing knowledgeable individuals to teach classes to children and adult in their own languages. For example, Dinka language is taught at the center.

The New Sudan Vision story also gives a nice example of why risk and security issues are not always linear.

Michael exhibited charisma and leadership qualities early on. Born to Dinka parents in Baping, a village on the outskirt of Wangâ€™ulei Payam in Twic East County, Jonglei State, South Sudan, Michael enjoyed good yet brief upbringing. He benefited from exceptional parenting, from caring and loving parents to a community that provided cultural values that nurtured him â€”something that definitely played a key role in how he faced life in the crucible of Africaâ€™s longest civil war.

His first job and passion was in herding family cattle before war intervened and cut that short. While in refugee camp in Ethiopia those great leadership qualities became handy as he took care of younger children.

â€œI think the tough situation inspired me. When I was a child living in the bush without guardians that taught me and now it is my personal responsibility to help children to realize their own potential. We have missed many things during our childhoods in Sudan, because of the civil wars and I donâ€™t want to see the children growing up with the similar situation that I passed through during those days,â€ he said.

A former employee of Bill Gates says the Microsoft leader wanted all user interfaces always to be exactly the same, which led to an awkward exchange

At one particularly frustrating moment, I offered the following: “Bill, a shower, a toilet, and a water fountain all have mechanisms to control water flow, places where the water comes out, some sort of porcelain basin to hold the water, and a drain, but we don’t combine them into one thing to reduce their learning curve. We don’t merge them into one object because each of them are in use in fundamentally different ways at different times.”

Then Bill’s verdict. [There was an almost interminable pause in the conversation, as Bill thought about what I had said. And then he looked up at me after some processing and exclaimed: ‘That’s just rude.’]

As I saw my career disintegrate before me, I started to question just how “beautiful” my analogy really was.

So I guess now we know why today so many people sh*t on Windows.

As much as a unified interface has some advantages, it certainly doesn’t lead to innovation/competition.

I’m not bothered that I have to ride a road bike differently than a mountain bike, or sail a catamaran differently than a mono-hull…this story also suggests it’s always a good idea to go to the bathroom before having an important meeting to ensure analogies do not go where the mind may already be.