A South Korean soldier slowly hands a shiny mechanical lighter to a North Korean soldier, as if to give thanks through transfer of better technology. The North Korean lights a cigarette and contemplates the object. The South Korean clarifies its value as “you can see yourself in the reflection; see how clean your teeth are”. This movie is full of clever and humorous juxtapositions, similar to questioning values of the urban cosmopolitan versus rural bumpkin. 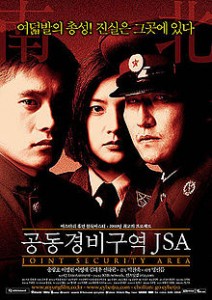 The area known as JSA (Joint Security Area) is a small section of the Demilitarized Zone (DMZ) between North and South Korea. The two countries have their military stationed literally standing face-to-face just a few feet from each other. Buildings in the area have served as meeting space, brokered by international oversight, and there is palpable tension in the air.

This movie draws the viewer into this feeling and the lives of soldiers suspended by two countries within an old armistice and trying to find ways around it; men and women trapped inside an internationally monitored agreement to postpone hostilities.

Primary roles are played by just four soldiers, two North and two South. Also stepping up to the dance are the investigators and observers, positioned in an awkward third role between the two sides.

The NNSC (Neutral Nations Supervisory Commission) and the US have a dominant secondary tier of influence to the dialogue. I found no mention of other global players, such as China or Russia. Perhaps the absence of these countries is explained by the fact this movie was released in 2000. Today it might be a different story.

Directed by Park Chan-wook the cultural perspective and references clearly are South Korean.

North Korea is portrayed in a surprising light as the more thoughtful and grounded of the two countries. The South is shown to be obsessed with shallow perfections, looking at itself and boasting about false success, while roles played by the North are either weary and wise or kind and naive. It is the US and UN that come out being the real villains in the script, perpetuating a civil war that would heal if only allowed by outside meddlers.

What comes across to me is a third-generation war movie; a Tarantino-syle M*A*S*H.

There is a strong pacifist-irony thread, clearly influenced by Tarantino’s style of borrow and remix old scenes from popular war/gangster movies using today’s direct approach. No subtlety will be found. The viewer is granted displays of full-gore slow-motion blood-splattering scenes of useless death, the sort of lens Tarantino developed as he grew up working in a Los Angeles video-rental store. John Wayne, for example, is played by the North Korean sergeant…

Chan-wook is quoted saying his movies highlight “the utter futility of vengeance and how it wreaks havoc on the lives of everyone involved”.

Despite the gore and sometimes strained irony, the film is suspenseful and on-target with much of its commentary. It offers a counter-intuitive story that veers uncomfortably close to glorifying the North and vilifying the US, delivering over-simplifications of civil war.

This is exactly the sort of popular cartoonist perspective many of us need to take into consideration, because it forces a rethink of how and where a “dark side” is being portrayed.

If Marvel were to dream up a superhero of South Korean origin it might have more shades of this plot than anything a US director would ever allow.

I give it four out of a classified number of penguins.