Facebook’s “secure” messaging app has been found vulnerable to compromise by a simple call.

…malicious code,…transmitted even if users did not answer their phones, and the calls often disappeared from call logs

The discovery was made by security researchers helping protect human rights defenders from targeted attacks by private firms. These private firms sell skills to highest-bidders, like mercenaries, which tends to correlate funding from targets of human-rights complaints.

And before we go too deeply into questions like “don’t these 0click vulnerabilities exist in other platforms that exist” let me suggest we ask why human rights defenders are using Facebook at all.

We can’t prove a teapot doesn’t exist in space, but we can say with certainty that atheist lawyers are less safe when using an app delivered by a church with a track record of denying the science of safety. 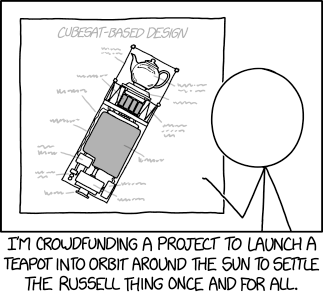 “Unfortunately, NASA regulations state that Bertrand Russell-related payloads can only be launched within launch vehicles which do not launch themselves”