The history of the phrase “melting pot” is an interesting one. A “Romeo-and-Juliettesque” play by Israel Zangwill staged in 1908, generally is credited for American usage. It reflected on the life of a Russian Jewish immigrant who searches for a better life after he survived the pogroms that killed his mother and sister.

Imagery of America as a giant pot of refugees notwithstanding, my school teachers used to talk about getting a better stew from more diverse ingredients.

Ford manufacturing plants, for example, were based on immigrant descriptions of assembly lines seen in England’s shipyards during the Napoleonic Wars. Edison famously proved immigration beneficial to his own accumulation of wealth by awarding himself (instead of his country) credit for any innovation made by immigrants he had access to, requiring them to assign to him all rights to their ideas. Perhaps Edison’s first name should have been changed to Stew.

Fast forward to today and National Geographic offers us a tree visualization as alternative, which has the benefit of emphasizing the significance of concentric growth rings. 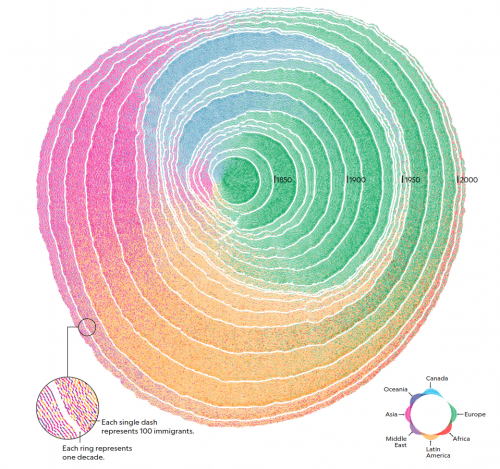 I also am reminded of “The Trees” by Philip Larkin, which the BBC posted as a visualization

The trees are coming into leaf
Like something almost being said;
The recent buds relax and spread,
Their greenness is a kind of grief.

Is it that they are born again
And we grow old? No, they die too,
Their yearly trick of looking new
Is written down in rings of grain.

Yet still the unresting castles thresh
In fullgrown thickness every May.
Last year is dead, they seem to say,
Begin afresh, afresh, afresh.