My 2019 BSidesLV presentation on AI security will be briefly in the “I Am The Cavalry” track and then again more in-depth in the “Public Ground” track: 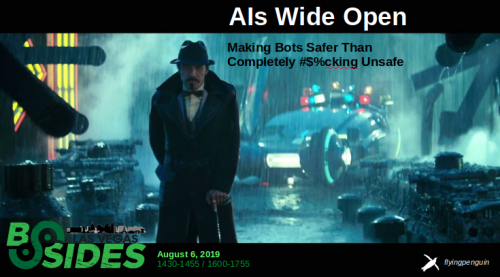 Abstract (I Am The Cavalry track):

Bladerunner was supposed to be science fiction. And yet here we are today with bots running loose beyond their intended expiration and with companies trying to hire security people to terminate them. This is 2019 and we have several well-documented cases of software flaws in automation systems causing human fatalities. Emergent human safety risks are no joke and we fast are approaching an industry where bots are capable of pivoting and transforming to perpetuate themselves (availability) with little to no accountability when it comes to human aspirations of being not killed (let alone confidentiality and integrity).

This talk will frame the issues for discussion in the Public Ground track later. Perhaps you are interested in building a framework to keep bot development pointed in the right direction (creating benefits) and making AI less prone to being a hazard to everyone around? Welcome to 2019 where we are tempted to reply “you got the wrong guy, pal” to an unexpected tap on the shoulder…before we end up on some random roof in a rainstorm with a robot trying to kill us all.

TL;DR “Once the state has been founded, there can no longer be any heroes. They come on the scene only in uncivilized conditions.” The Philosophy of Right, Georg Wilhelm Friedrich Hegel

RIP Rutger Hauer, the actor who turned down a role as an actual Nazi to instead play a futuristic robo-supremacist leader of renegade replicants in Bladerunner. He passed away this month aged 75

“Rutger read [my] speech and then went on with a couple of lines about memories in the rain,” co-screenwriter David Webb Peoples told THR in 2017. “And then he looked at me like a naughty little boy, like he was checking to see if the writer was going to be upset. I didn’t let on that I was upset, but at the time, I was a little upset and threatened by it.

“Later, seeing the movie, that was a brilliant contribution of Rutger’s, that line about tears in the rain. It is absolutely beautiful.”

Hauer said he turned down a role in Wolfgang Petersen’s Das Boot (1981) to work on Blade Runner, which he noted “wasn’t about the replicants, it was about what does it mean to be human?” The late Philip K. Dick, whose novel served as the basis for the film, called the actor “the perfect Batty — cold, Aryan, flawless.”

His most famous line was basically a haiku