Russian Geographical Society used one of its modern landing crafts in a way a mother walrus didn’t appreciate, so most news outlets are describing how she attacked their boat, sinking it and sending the Russian military running for their lives.

Naturally the Russian military made a statement that reported the opposite:

“Serious troubles were avoided thanks to the clear and well co-ordinated actions of the Northern Fleet servicemen, who were able to take the boat away from the animals without harming them.”

Definitely avoided any serious troubles there. “Able to take the boat away” from threats is double-speak for sinking. Aha, you can’t attack Russian boat, because there is no boat. Troubles avoided! Swim faster comrades, it is very cold.

Maybe something was lost in translation when Russians said they thought they were up to the tusk (pun intended).

A first-person account in Russian media said their boat was done in and a video shows them trying to poke the walrus with a gaff, which probably just made her more angry. 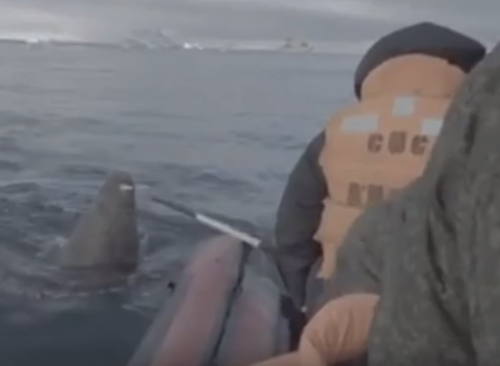 Speaking of being lost…

The area in question supposedly is on Wilczek Island, (Остров Вильчека) in the southeastern end of Franz Josef Land, Arkhangelsk Oblast, Russia. Maybe it’s somewhere else?

I have yet to find a western map anywhere listing a “Cape Geller” (мысе Геллера). Who was Geller?