One of the lesser known stories in the American mobile technology space is Sailfish OS by Jolla. For whatever reason it never seems to get any press, unless you count this sideways glance in ZDnet

I have seen all too many failed attempts to compete with Android and iOS. But I’m impressed by Duval’s privacy-first approach, which builds on the existing successful Android platform. Instead of trying to replace it, he’s making the best of it. I think with privacy being more of a concern for users and hardware vendors looking for Google-free operating systems, /e/ may be successful where so many others have failed.

Ok, first of all to be fair, I am assuming these non-specific phrases include Sailfish OS. It is a Linux-based OS (i.e. Meego derivation, following N9 Linux-based phones from 2011) that successfully replaced Android in 2013 and ran an emulation engine for Android. Does the author believe it failed?

Despite being in America I’ve used it since basically v1.0.1 (called an “Android love fest” by TheReg) on dedicated Jolla hardware as well as Sony phones and it’s great! One of the amazing things about the Android emulation was how it allowed app stores to be multi-master.

It wasn’t as slick as the Nokia firmware-based regional packages that came before it, but Jolla allowed users to choose apps from stores completely disconnected from Google, never touching American soil for that matter.

Second, there’s some kind of weird thing going on at Google where in 2017 their HTC-based phone was codename Sailfish. This new /e/ OS lists Sailfish as one of the phones it will run on already. Perhaps you could call this some kind of coincidence but it’s hard to believe it is random since…

Third, in 2016 the Russian government announced Sailfish was their preferred platform. At that time the name only referred to one thing:

…after a thorough review of several open source based options, the Ministry publicly expressed support for Sailfish OS, which was chosen as the platform for further development.

This came up again recently as Russia has been using the self-harming trade policies under the current US administration as a way to promote Sailish-based mobile development versus American tech companies.

And fourth, if success is based on users making privacy a concern, then surely Sailfish (the non-Google one) should already have registered as a win. And that’s not even to mention that it was Linux from the start.

In other words, I appreciate that there’s another Android Appstore non-Android phone with privacy in mind, being developed by the Mandrake founder. More options sounds great to me! Although his sense of history does worry me.

“The 80s have been the most exciting period in computing so far, in my opinion,” he said. “Well, I can’t talk about the 60s and 70s period.”

However, at this point I’d like to see a simple comparison table with Sailfish: Ideas stolen by Google? Endorsed by Russian government? Runs on OEM hardware that Google resells?

Finally, the article on /e/ also mentioned how it would run on Samsung devices. If that’s a goal, I figured I should pull out this history chart showing the development of Samsung’s non-Android OS that their mobile devices can run already: 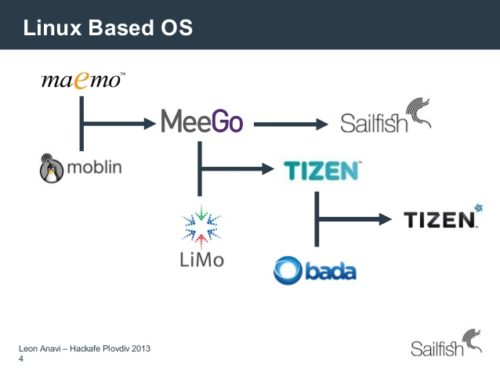