Data in a new LA Times report (and posted to github) reveals that despite whites being found with contraband more often, blacks and latinos are stopped far more often to be searched.

Yet whites were found with drugs, weapons or other contraband in 20% of searches, compared with 17% for blacks and 16% for Latinos. The totals include both searches of the vehicles and pat-down searches of the occupants.

The analysis in the report indicates less evidence was used to prompt a search of latinos and blacks than whites. On top of that, after being stopped and searched, whites also saw better treatment and lower arrest rates.

Blacks and Latinos were more than three times as likely as whites to be removed from the vehicle and twice as likely to either be handcuffed or detained at the curb, the Times analysis found.

About 3% of blacks and Latinos stopped by the LAPD were arrested, compared with 2% of whites. 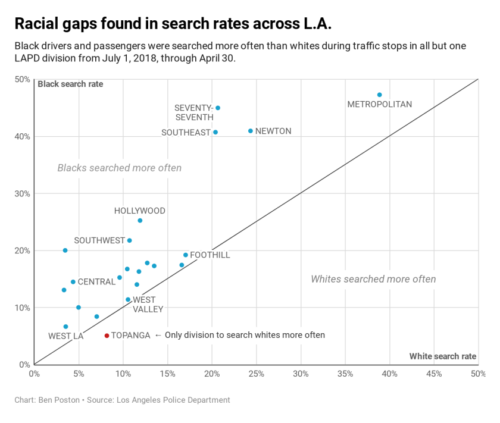