There was no tipping in America before Civil War.

It was during the 1920s — the second rise of KKK after Civil War ended — when all anti-tipping laws were repealed in America to make way for white supremacists to promote it as somehow better for someone. Why was the KKK campaigning to legalize tipping?

A labor review of December 1937 asks a very poignant question about why upwardly mobile blacks in Washington (1909), DC (1910), Mississippi (1912), Arkansas (1913) Iowa, South Carolina and Tennessee (1915) as well as several other states would pass anti-tipping laws only to find them repealed a few years later:

When they say anti-tipping sentiment was strong, consider that unionized waiters of New York went on strike in 1906 to refuse tips and demand a minimum wage increase from $2.00/day to $2.50.

It would seem the unions were not ordering strikes for higher tips, only for higher wages.

I should probably make a special note here that when Washington DC banned tips in 1910, basically everyone affected was African American. It clearly was about race and livable wages.

What changed in the early 1920s? The KKK returned.

Indeed, this is like asking why the south went to war to preserve slavery in view of the fact that anti-slavery sentiment was strong.

Or perhaps it would be like asking why the KKK pushed so hard for prohibition (encoded criminalization of non-whites) in view of the fact that anti-prohibition (emancipated slaves distilling bourbon) sentiment was still strong.

In other words, anti-tipping laws started in 1909 before the KKK was restarted and all were repealed after. The KKK quickly grew to millions of members under Woodrow Wilson’s administration (1912-1921) and restoring tipping culture was top on their agenda.

One almost could make the argument that anti-tipping laws were a symptom of the changes in America that really inflamed “white insecurity” fears. The late 1890s racist political campaigns took on new urgency to remove anything that could give black Americans fair wages (Update in 2020: “Wilmington’s Lie: The Murderous Coup of 1898 and the Rise of White Supremacy“).

You could say tipping is how racist Americans who lost their Civil War managed to instead legalize their persistent “only white men rule” aims for aristocratic-like power over the now-emancipated black servant class in America.

The abrupt end of slavery in America meant white supremacists shifted tactics to find ways to deny livable wages to non-whites. They also sought to under-fund or block taxation to reduce the social services (education, healthcare) for those they had just denied a livable wage. NPR brings forward several examples of sentiment from the early 1900s after Civil War ended:

…journalist John Speed writing in 1902 said “Negroes take tips, of course, one expects that of them – it is a token of their inferiority. But to give money to a white man was embarrassing to me.” Such was the furor surrounding tipping that, in 1907, Sen. Benjamin Tillman of South Carolina – a virulent segregationist whose bronze statue stands outside the statehouse in Columbia – actually made national headlines for tipping a black porter at an Omaha hotel. The porter, well aware of Tillman’s previous boast that he never “tips a nigger,” told reporters sardonically that he would have the quarter made into a watch charm. “Tillman gives Negro a Tip,” was The New York Times’ headline, under which ran a sympathetic editorial on how travelers were forced “to convert themselves into fountains playing quarters upon the circumambient Africans.”

Thus it was two basic economic tactics meant to undermine black prosperity in America that became the foundation of America’s racist and hateful tipping culture. And the KKK was so successful the practice survives to this day.

That’s the short version of history. Now for the long form…

Some in America saw the dangers of tipping early and worked to shut-down such anti-democratic culture, arguing correctly it violated core American values. There were numerous anti-tipping laws in the early 1900s. Here you can see some of the views of tipping in America at that time:

The KKK was reborn in 1915, however, and had massive impact on American culture pushing things like the racist prohibition laws (1920 to 1933). No surprise then, by 1926 the white supremacist lobby had repealed anti-tipping laws. 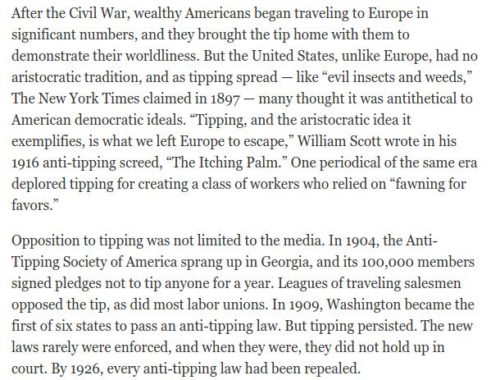 One of the most powerful arguments, seen here in a 1916 rebuke of Americans worshiping aristocracy, is how tipping culture is so obviously incompatible with democracy.

This 1916 analysis is confirmed by a Paris Food History blog recollection of where and why tipping culture was invented…French aristocracy and corruption:

These are all examples of an aristocrat giving a gratification to various workers […] It is unlikely on the other hand that diners in taverns and the cheaper cabarets gave tips. This was an obligation for aristocrats – or, probably, those who wanted to emulate them. And it even extended to those in the prison which most often held them: the Bastille. […] Everywhere you eat, submit without a murmur to the tax of the tip. It is illogical, absurd, exorbitant, vexatious […] In 1856, August Luchet described the tronc in which all tips were gathered: “a cylindrical metal safe, split on top.” He also wrote that (not unexpectedly) distribution of the collected tips was not always to the advantage of the servers; some owners found various pretexts for redirecting or appropriating some portion of the funds.

New York, arguably modeled on Paris at its hey-day, has now become the epitome of the “aristocrats in a prison” culture as described above.

…tips are not niceties: give a “thank you” that isn’t green and foldable and you are actively starving someone’s children. This is not only demeaning for everyone; it also makes you feel, basically, that you are being constantly taken…

She’s not wrong. The economics of tipping look to be a disaster for everyone involved. The Economic Policy Institute explains that poverty rates of tipped workers is nearly double other workers and three times more likely to be on food stamps:

Tipped workers — whose wages typically fall in the bottom quartile of all U.S. wage earners, even after accounting for tips — are a growing portion of the U.S. workforce. Employment in the full-service restaurant industry has grown over 85 percent since 1990, while overall private-sector employment grew by only 24 percent. In fact, today more than one in 10 U.S. workers is employed in the leisure and hospitality sector, making labor policies for these industries all the more central to defining typical American work life.

In other words, by tipping, you are pushing less money into a tax pool while at the same time driving the person tipped to need more tax-funded assistance. It’s quite literally a means for aristocrats to appear good in a fleeting personal moment, while actually keeping poor workers in a place they can’t escape.

This shouldn’t be news to anyone. For ten years already we’ve had quantitative data to support what all these arguments above are saying.

The data at this point shows that tipping has become the norm in America as a legalized method to keep non-whites poor in an anti-democratic push for white nationalist aristocracy, and it doesn’t really serve any other purpose.

…98 percent of [21 million Americans eating out] leave a voluntary sum of money (or tip) for the servers who waited on them. These tips, which amount to over $20 billion a year, are an important source of income for the nations’ two million waiters and waitresses. In fact, tips often represent 100 percent of servers’ takehome pay because tax withholding eats-up all of their hourly wages. The income implications of tipping make it a major concern…weak service-tipping relationship, I argued, raises serious questions about the use of tips as a measure of server performance or customer satisfaction as well as the use of tips as incentives to deliver good service….weak relationship between tips and service quality at this level of analysis undermines the use of tips as a measure of customer satisfaction and an incentive to deliver good service.

This also has been described by psychologists in similar terms:

Again, just to be clear we’ve seen for over a decade studies have repeatedly proven “tipping was not significantly related to servers’ or third-parties’ evaluations of the service.”

Tipping really should be treated as an insult and disrespect, when you think about what’s going on.

I remember one night on a work trip in Copenhagen I asked a waitress if I could leave a tip and she angrily replied:

I am paid a reasonable salary for my work and I am good at it. I go to school for free and get healthcare for free. This isn’t your corrupt greed-driven American system. Tips are rude.

She was right. I was caught out for being so… American, unintentionally imposing slavery culture.

There’s no actual link for tipping to better service when you look at the data so my tip in her country made no sense because they have no aristocratic aspirations or need to perpetuate an economic disparity. She wasn’t desperate for an aristocrat to keep her afloat. Since she and I were in a balanced professional engagement, an amount already was settled and handing her a few bills was an insulting gesture.

Taking pride in your work and doing a good job don’t actually come from tips, as restaurateurs explain themselves.

In any workplace, everyone is required to perform well, and tips have nothing to do with it.

We see scientists report that tipping in America is racist by design, perpetuating the aristocratic aspirations of pre-Civil War Americans, and does exactly what the KKK had hoped it would.

The data show very clearly that African Americans receive less in tips than whites, and so there is a legal argument to be made that as a protected class, African American servers are getting less for doing the same work. And therefore, the institution of tipping is inherently unfair.

It is inherently unfair because that is what it was always intended to be, if you accept the argument that it was a loophole for perpetuation of white nationalist policy.

What tips have to do with is a Civil War started by white aristocrats to perpetuate and expand human slavery. Despite losing that war, white supremacists have found numerous ways to maintain programs designed to disadvantage non-whites. That is how American tipping is rooted in slavery and should be abolished.