I probably should have put a spoiler alert in the title.

A brand new 2020 report from the British Royal Air Force (RAF) warns that they were able to use a swarm of “affordable off-the-shelf decoy to wreak havoc on enemy integrated air defense systems.”

“During the demonstration, a number of Callen Lenz drones were equipped with a modified Leonardo BriteCloud decoy, allowing each drone to individually deliver a highly-sophisticated jamming effect,” according to Leonardo’s press release. “They were tested against ground-based radar systems representing the enemy air defence emplacement. A powerful demonstration was given, with the swarm of BriteCloud-equipped drones overwhelming the threat radar systems with electronic noise.”

You may be wondering if this is the first successful test by an air force of affordable off-the-shelf decoys wreaking havoc on air defense systems.

To answer that quickly, I present to you an account of decoys in a 1946 report called “Paper Bullets” from the United States Office of War Information.

A Mitchell bomber crew, which had been bombing Italian rail communications carried a couple of bundles of leaflets and some wine bottles every time they went out to bomb. Questioned by a psychological warfare officer, who failed to find this particular plane on his schedule, one member of the crew replied: “This is psychological warfare, Mac. Before we hit the target we take a fake bomb run over the nearest flak crew and throw these bottles and the leaflets out. They whistle just like bombs and the flak crew takes cover. Then we go on and bomb as per schedule.”

Set aside the point that maybe the crew was joking and they came up with a funny story to hide the fact that they were alcoholics or at least drank a lot of wine while flying as some form of self-medication.

The idea of dropping whistling bomb decoys over air defense units makes a lot of sense, and wine bottles might disintegrate or disappear enough to avoid suspicion of decoys.

Here’s the full report as a PDF on archive.org: 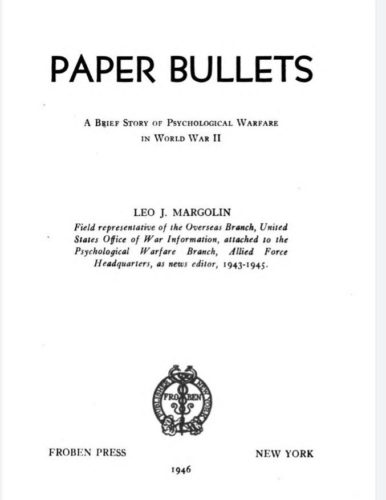 Another perspective from history on “drones” (human pilots seen as disposable) overwhelming air defenses is here:

RAND’s first attempt to model a nuclear strategy ignored so many key variables that it nonsensically called for deploying a fleet of aging turboprop bombers that carried no bombs because the United States did not have enough fissile material to arm them; the goal was simply to overwhelm Soviet air defenses, with no regard for the lives of the pilots.

In related news, DefenseOne asked readers earlier this year “Should the US Have a Secretary For Influence Operations” and Military.com has just published the headline “‘Data Is the Ammunition’: Inside the Pentagon’s New Strategy to Dominate Future Battlefields“.

Looking back again, the 1946 Paper Bullets view of the world ends with these questions:

We are very well aware that the right words properly put together, delivered at the right spot at the right moment, can capture and kill. Why not use words and ideas as an instrument of peace, rather than as an instrument of death? A longing for peace is deep in the hearts of all decent peoples everywhere. There are good arguments for those who insist the best way to maintain the peace is to maintain a war machine to police the world and to keep the peace by force. Why not, then, the establishment of a U.S. Department of Information on the same status as the War Department and the Navy Department? Why not a U.S. Department of Information to police the world with words of truth?

We’ve come a long way from swarms being empty wine bottles, yet it seems also we haven’t moved very far along at all.