Update April 13 (one day later!): LinkedIn has investigated and restored my post! Many thanks to the various teams working together to resolve this. They have explained a cascade of issues that caused the deletions and have been working on fixing things. I will share more details as soon as authorized.

One of my most popular posts on LinkedIn was about the logical fallacies, as well as some history, of Virginia Police. LinkedIn gave me an award for it…

Then the post was deleted, as well as all my comments on other posts about the Virginia Police. I had at least a dozen comments on this thread, for example. 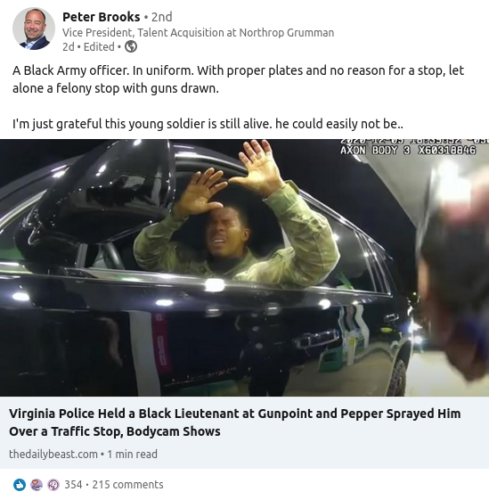 All of my words gone without any notice or explanation.

My first sign someone was censoring me was traffic drop across posts, any post really. Flow suddenly went from thousands to just a few.

On a normal day I will see a post hit a couple thousand views. Suddenly, my posts had 10 views, or 7 views.

It’s a sure sign LinkedIn has a human poking around in your profile and timeline, reviewing posts, when traffic drops dramatically without any reason or notice. 7 views? I knew something was wrong.

My second sign was that I was given an award by LinkedIn and when I went to look at the post they awarded it was… deleted.

How nice of LinkedIn to notify me to go take a look at my post that nobody can look at because they erased it, while giving me a medal for the thing they destroyed.

I wasn’t saying anything shocking, mind you, just pointing out the basic logical fallacies.

Here’s some more background on the story itself:

And now here was my LinkedIn post in its entirety:

That’s it. And LinkedIn deleted that.

The police in this “traffic stop” clearly were speaking the language and using the basic procedures of a lynching.

No matter what their target said or did, he was judged wrong by them in order to intentionally escalate the situation into killing him.

The fact he survived is perhaps due to his professional military training that kept him calm and compliant in very logical fashion. It was clear to me (and others) he kept his hands out of the window even when he was told to reach inside and unbuckle, because to reach inside to the hip could mean he would be shot instantly on suspicion of having a weapon.

I’m not saying service members should get special treatment from law enforcement but usually there is a level of mutual respect and that clearly wasn’t the case here. I saw a soldier who despite being pepper sprayed had the sense of awareness to keep his hands up despite everything else. He didn’t want to reach down for anything.

Usually we have to assume it is only the police who are being trained and paid to know how to deescalate a situation. Here you can see how the police flagrantly escalate instead, violating simple principles. It is clear the target of police was in fact the one acting far more professionally (also having been trained and paid to remain calm and deescalate).

Sgt. Maj. of the Army Michael Grinston tweeted this:

He represented himself and our Army well through his calm, professional response to the situation – I’m very proud of him.

Agreed. Pepper sprayed in the face, violently hit from behind, the whole time keeping his calm and professional stance against these coordinated attackers using terror and incitement tactics.

Also I have to point out that a LinkedIn profile, which claims to be a US Army veteran from Colorado Springs (I’ll hide his identity here), was quickly spreading comments everywhere to discredit the victim of Virginia police.

The themes of this profile all were classic KKK talking points.

First, he used the false argument George Floyd committed suicide. The absurd theory is that police didn’t kill Floyd, he is the one who put himself into a situation that killed himself from police negligence. It’s clearly false but the KKK will try to argue black people are somehow not healthy enough to survive police abuse.

Second, he used the false argument that lawsuits are lucrative and bring payouts, thus black men are getting themselves lynched because they are greedy. Again it’s clearly false but the KKK will try to jump from saying black people won a case of injustice to therefore police and taxpayers are being harmed by having to pay damages when black people die.

Again these first two are the classic talking points of the KKK. They are parroting a simple fraud that blacks deserve to die at the hands of police officers no matter what because of being black, while substituting some other word and state of being for the word black.

Third, this US Army veteran kept saying that there was scant evidence and too little information to rush to judgment on the police actions yet he firmly believed the target of police was fully in the wrong and needed to be immediately kicked out of the military. He even slipped as used the phrase “I hope they are not attempting to hang the success of their case” in his comments.

All of these fraudulent talking points historically are used in the language of a lynching, which is why the police saying “ride the lightning” is particularly important reference.

Nothing about this “traffic stop” justified such gross excessive violence, and to even trained law enforcement it comes across as bizarrely unnecessary and strange escalation.

We have to shift frame to history, especially history of Virginia, and think instead of an attempted lynching. Then all of the steps fit right into place.

In fact, to be accurate, more black people are killed by police than were lynched during Jim Crow. Police in America kill on average 3 citizens every day.

Even this official statement fits into place:

The Town of Windsor prides itself in its small-town charm and the community-wide respect of its Police Department.

This town says it prides itself in respect of its Police Department? That’s their big public reaction? Wait, there’s more.

The Town of Windsor prides itself in its small-town charm and the community-wide respect of its Police Department. Due to this, we are saddened for events like this to cast our community in a negative light.

They are sad that their community is cast in a negative light.

Let’s review. An American is pepper-sprayed and beaten at gunpoint for committing no crimes other than a Jim Crow-era dog whistle crime of needing to show police “respect”. Then the town reacts to video saying yeah we are proud of people who respect the police. And they’re sad that people see attempting lynchings in a “negative light”. Think of the positives!

This was an attempted lynching and it was very clear police were escalating violence to force a black man show them “respect” or be killed by the “lightning”.

I mean a town that publishes an official “prides itself” and “respect of police” letter in reaction to an attempting lynching, really doesn’t bode well for any kind of meaningful justice or reform.

Or maybe we can put this another way, once again using their own words and actions as evidence?

In 2002 the Town of Windsor created a new emblem for its centennial. In the 100 years since 1902, this town decided to highlight… wait for it…

The centennial emblem, which was designed in 2002 for the centennial by the then town manager Kurt Falkenstein represents 100 years of Windsor History. […] Men of Windsor Station answered their call to serve the Confederacy, and the Isle of Wight Rifle Grays (symbolized by the crossed rifles) were drilling and registered in 1860. This unit, under command of Captain Watkins, served with Company D 16th Virginia Regiment. The 16th Regiment served in many major battles and was with General Lee at the surrender at Appomattox.

That’s right! To commemorate the time since 1902 the town of Windsor in 2002 added a pair of guns from the 1860 pro-slavery forces to their official emblem.

Maybe in 2022 we can look forward to the Town of Windsor adding another pair of guns to their emblem to celebrate the positive aspects of an attempted lynching? I mean they definitely didn’t think it would cast a negative light to have guns from 1860. We know it won’t show up on LinkedIn though.