A paragraph in the 1977 book “The Shamrock and the Swastika: German Espionage in Ireland” on page 44 has this detail:

…informers provided [Eduard Hempel, German Minister to Dublin from 1937 to 1945] with technical information. One, claiming to be a follower of the English Nazi, Oswald Mosely, said a Swedish firm was making 7-inch by 6-inch tin cylinders, each with tightly rolled strands of eight or nine wires, which were to be shot from cannon at planes. The exploding cylinders would open, throwing the wires out for gradual descent to the ground and, it was hoped, to be entangled in the aircraft propellers.

It doesn’t name the firm, but I wonder if it was related to the workplace of Victor Hammar (chief of Bofors design engineering after 1921).

Speaking of Bofors, an Australian recount of WWII mentions them right before describing a deployment of cannons that fired long strands of wire.

…12 static 40-mm Bofors guns of the 40th Light Anti-Aircraft Battery, which were disposed singly around the harbor. In mid-August the Royal Navy provided three 20-barrel parachute rocket projectors whose missiles contained a parachute which opened above the vulnerable area and trailed long strands of wire — like an octopus with long tentacles; at the end of the tentacles was a small bomb. The rockets were first used on 18th August and achieved great success… 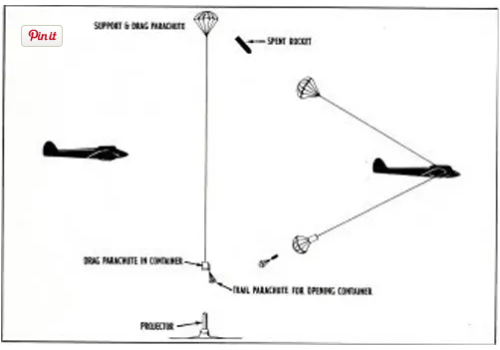 An Illustrated Encyclopedia of 20th Century Weapons and Warfare tells us that these weapons technically were not referred to as rocket, but “unrotated projectile” (UP Mark I).

Cordite was used to ignite (“Project”) a 3-inch (7.62 cm) rocket motor which propelled a fin-stabilized 7-inch (17.8 cm) diameter Parachute and Cable (PAC) rocket which carried a 8.4 oz (238 g) mine. When the rocket reached approximately 1,000 feet (330 m), it exploded and put out the mine which was attached to three parachutes by 400 feet (122 m) of wire. The design concept was that if a plane hit the parachutes or the wire, it would then pull the mine into itself.

…continual and violent advocacy of a fantastic scheme for dropping bombs hanging by wires, in the path of attacking aircraft…

The whole thing was considered top-secret so records are hard to come by but a rough guess is maybe Swedes helped to design and deliver what a socially awkward British professor demanded be built early in WWII.

One thought on “WWII Exploding Cylinders of Wires in the Sky”