In a discussion about disinformation on LinkedIn I was asked to assess a particular account:

The follower count is suspicious, to begin with. Let’s start with her self description.

Business Administrator from the Pontificia Universidad Javeriana and Marketing Management Specialist from the Jorge Tadeo Lozano University; person, very enterprising, with leadership capacity, hard-working and challenging. A woman with a firm focus, work ethic, strategic thinking and ability to structure international projects. With the necessary experience for positions focused on the client, Management of social projects, Administration, Control, Quality, Personnel management, and Security.

Despite the broken English and poor grammar, it is plausibly consistent with her profile.

There’s an initial hint her profile is a copy or stolen from someone else, as her image looks like a screenshot of an advertisement. 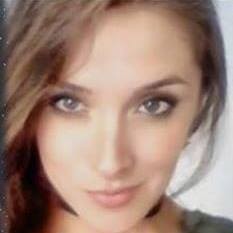 Another hint is her connections have a suspiciously high number of Chief Information Security Officers (CISO) in America.

Where things go awry quickly is her timeline, which spews constant right-wing disinformation garbage; she rapidly is posting things completely and illogically inconsistent with her profile.

Here she is attempting to destroy trust in American science and doctors. A trial started to examine results is posted falsely as a “cure for cancer”. 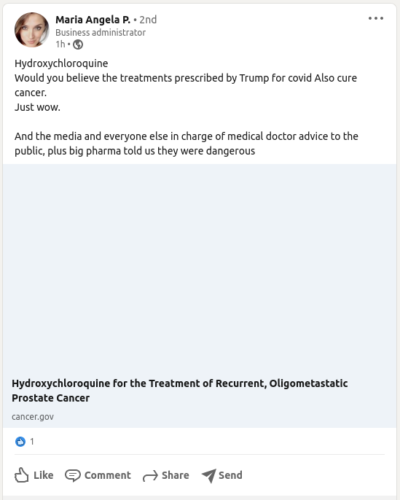 That’s a post claiming a “cure for cancer” has been found, yet takes you to a US government page that clearly warns it is a trial:

A phase II trial means research, to see if a treatment works. It is NOT a cure.

Why is she posting medical disinformation in English? Why is she attacking American medical experts? In a post just before that one, she yells “AMERICANS… WE’RE”. We Americans? Is she American? 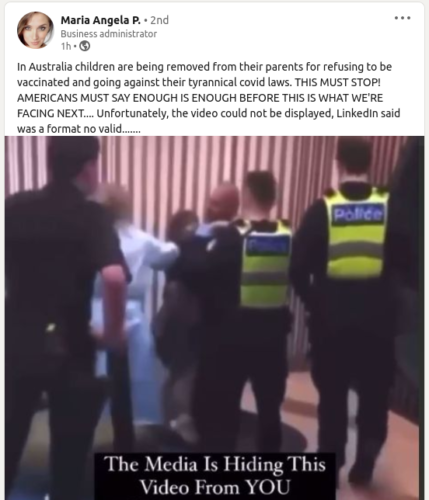 Why is she claiming a video can not be displayed? Of course she could just say where to find the video. But then the image tries to claim “media is hiding this”, as if you can’t find the video she obviously found.

All of it looks fake and laced with propaganda methods to gin up emotion.

Here’s an even bigger clue. The account also posted in English a screenshot of a news story in Spanish with “here in Romania”… 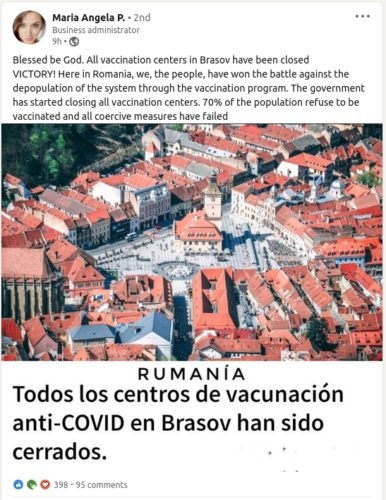 The inconsistencies on this one are so sloppy they raise more red flags than a Soviet military parade.

Simple logic tells us there’s no reason for her to post an alleged Spanish news story with an English comment.

Who is that target audience? I said alleged because there’s no link to the news story. Like the story above there’s no name for the news source or site.

And so of course the story that “all vaccination centers in Brasov have been closed” is… completely false, a total lie.

A simple check of the Romanian government “National platform of vaccination against COVID-19” shows Brasov has many active and open locations. 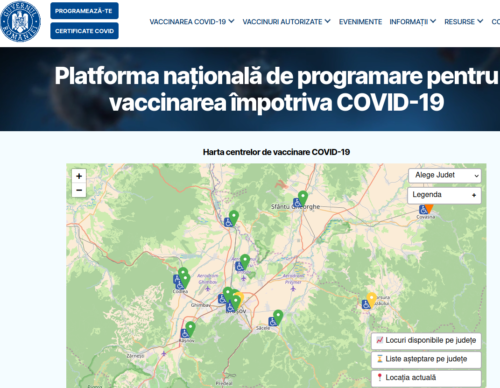 Let me pan out a little to make this point a little clearer, to show the reality of Romanian COVID-19 vaccination centers. 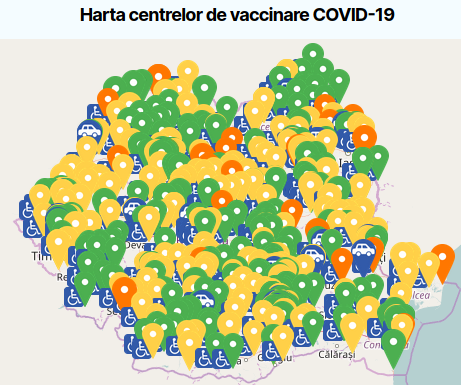 In other words, this LinkedIn account clearly spreads disinformation about availability of vaccines in a place where vaccines have the highest acceptance rate.

The reason alleged for Romania’s low rate is that they didn’t impose a phased roll-out and allowed disinformation (such as this LinkedIn account) to spread.

Romania’s dramatic fall from near the top of the EU vaccine league table to being second last can be explained by the campaign’s botched rollout, said [Răzvan Cherecheș, executive director of the Center for Health Policy and Public Health at Babes-Bolyai University].

Unlike other countries, which generally followed a priority schedule according to age and health risk, Romania quickly opened up the vaccine offer to the whole population. While this meant that everyone who wanted a shot was able to get it, enthusiasm quickly fizzled out because a “big mass of skeptics” remained un-jabbed after the first rush, Cherecheș said.

In most other countries, by contrast, anticipation and enthusiasm were higher across age cohorts because each had to wait their turn, he argues.

Anti-vaccine sentiment also is reported to around 59% (at least 10 points below the disinformation post claiming 70%). A sociologist discussing fraud in Romania offers the following analysis.

Anti-vaccination propaganda is very strong and has gained many followers, amid a poor organisation to counter it by the Romanian authorities.

Again we’re looking into facts for an English-language LinkedIn post of a fictitious Spanish news article about Romania.

Where is the author and who is the intended audience?

The comments on the post seem to be somewhat of a giveaway. Remember the 23,000 followers? Watch who chimes in to say they are happy to receive such disinformation.

Here is Ray Waltz (America) flying the infamous and controversial “blue” flag with very little other information on his profile. 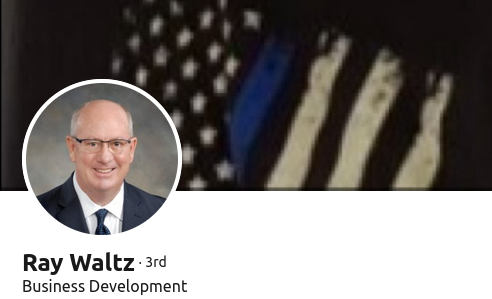 Note in particular how he frames the fictitious Romania story as “can’t totally discount their logic and statistics” — opposing vaccination — before switching into concern that “thousands walk across our Southern border unvaccinated; then distributed”. 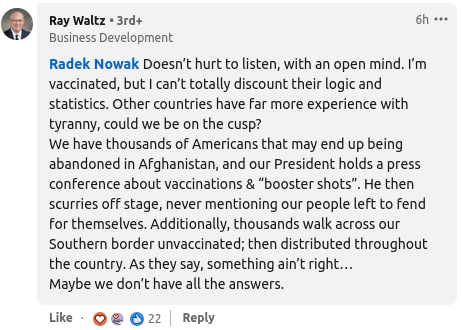 We ABSOLUTELY can discount a fictional post. There is no logic. There are no statistics. What is Ray Waltz saying? He’s in fact just being a racist (thus the “blue” flag).

His comment is trying to force people into “listen” and then hit them with vaccinations are not needed unless someone were to “walk across our Southern border”.

What changes in the south? Race.

The appeal to “listen” (given a fiction and contradiction) is just a bogus wind-up to his attempt to push the divisive idea of non-whites as a disease.

…the highest coronavirus case rates are among Whites and Hispanics, who make up 34.9 percent and 35.8 percent of [Texas] cases respectively…

Thus these bogus “listen” comments on social media, laced with divisive race-baiting to spin debate, have for a long time now been identified with Russian disinformation tactics.

While a majority of Americans believed vaccines were safe and effective, looking at Twitter gave a different impression and suggested that there was a lot of debate about the issue, the disinformation study, which was published in the American Journal of Public Health, said.

No other comment in that thread gets any attention yet Ray Waltz suddenly sees 22 likes from profiles like Torben Malmos (Denmark), who posts even more obvious falsehoods.

Before we go too far down the rabbit hole, let’s assume for a minute that Maria Angela P. really is a person in Columbia who wants to connect with a lot of security professionals in America.

And to be devil’s advocate, maybe she just accidentally typed “here in Romania”, while she uses her professional voice to spread non-stop English-language anti-vaccine and right-wing extremist American rhetoric. Here’s a sample of what her timeline is like today.

That last one is particularly bizarre.

All this started 2 weeks ago. Prior to this disinformation campaign her account was dormant for an entire year.

What did she post a year ago? Some doubts about COVID19, yet mostly local news or warnings about pandemic that give the opposite impression from the above list:

…also a lot of pro-police anti-BLM, anti-China, pro-Trump anti-black news about crime, where the voice again claims to be from an American. 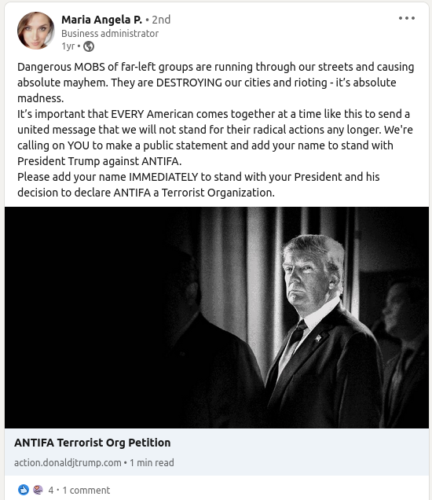 What you won’t see in all the international posts is news about Russia. There is not even a post about the vaccine in Russia, and definitely not a single post that mentions let alone is critical of Putin.

It’s all a bit bizarre in that there’s no good reason for this account to be spreading disinformation targeting America. What awoke the account 2 weeks ago suddenly? And why is there zero commentary directed at Russia?

Odds are high it is someone completely taken in by Russian military intelligence operations, yet there’s a good chance it is even worse — an account operated by someone masquerading behind a fake or compromised account just to peddle anti-American content and stoke right-wing rage.

As a final note about the artificiality of the account, note this odd exchange.

A different account that allegedly is from London, England comments “God bless Romania” on the post about Romania and Maria Angela replies (again, allegedly from Columbia)…

“All my pleasure… God bless America”. 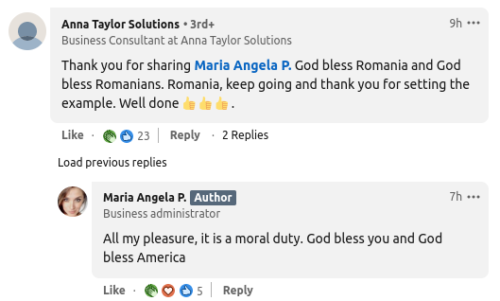 The fake profile photo has disappeared presumably to avoid being taken down as a fake profile, actually increasing likelihood that it is one.

Also (after saying nothing about Russia, instead talking randomly about many other countries around the world) some obvious pro-Putin propaganda has abruptly started to appear, adding another piece to the puzzle. 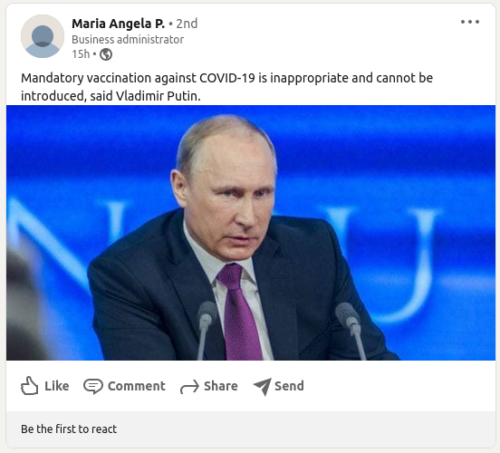 The below set shows both encoded antisemitism and Russian propaganda.

One thought on “Are You Connected With a Russian Disinformation Account on LinkedIn?”