The key context to consider with smart toilets is whether they enhance or detract from data analysis already being done at the block-level, let alone in bulk wastewater treatment analysis.

In other words, does generating more client-side analysis of human output (dare I call it log analysis) benefit the individual relative to having it done already on the service-side?

I’ve given presentations about this since at least 2012, where I warned how encryption and key management were central to protecting the privacy of toilet dumps (of data).

Anyway, fast forward a decade later and the WSJ wants you to believe that all this old debate is somehow a new topic being figured out by none other than the genocidal brand of Stanford.

The next frontier of at-home health tracking is flush with data: the toilet. Researchers and companies are developing high-tech toilets that go beyond adding smart speakers or a heated seat. These smart facilities are designed to look out for signs of gastrointestinal disease, monitor blood pressure or tell you that you need to eat more fish, all from the comfort of your personal throne.

Let me just make a few more points about Stanford ethical gaps, given the WSJ reports they are using Korea to manufacture their design into an entire toilet (instead of a more sensible sensor attachment, plumbing product, or a seat modification).

The Stanford team has signed an agreement with Izen, a Korean toilet maker, to manufacture the toilet. They hope to have working prototypes that can be used in clinical trials by the end of this year, says Seung-min Park, who leads the project, which was started by Sanjiv Gambhir, the former chair of radiology at Stanford, who died in 2020.

First, toilets are semi-permanent and rarely upgraded or replaced, so such a technology shift is a terrible idea from both a privacy and interoperability/freedom perspective. A vulnerability in the toilet design is a very expensive mistake, unlike a seat, sensor or plumbing change.

Second, of course Stanford did not go to Japan (arguably a country that is world leader in toilets alone as well as satiation technology) because the Japanese would have laughed Stanford out of the room for “inventing” something already decades old.

Look at this April 2013 news from Toto, for example:

An “Intelligence Toilet” system, created by Japan’s largest toilet company, Toto, can measure sugar levels in urine, blood pressure, heart rate, body fat and weight. The results are sent from the toilet to a doctor by an internet-capable cellular phone built into the toilet. Through long distance monitoring, doctors can chart a person’s physical well-being.

Toto’s newest smart john, the Intelligence Toilet II, is proving that it is more than an ordinary porcelain throne by recording and analyzing important data like weight, BMI, blood pressure, and blood sugar levels.

There’s a “sample catcher” in the bowl that can obtain urine samples. Even by Japanese standards that’s impressive. Yes it has the bidet, the air dryer, and heated seat, but it’s also recording pertinent information.

This information is beamed to your computer via WiFi and can help you, with the guidance of a trained physician, monitor health and provide early detection for some medical conditions.

The Japanese company Toto, a world-leading brand in toilets, is thus easily credited in the actual news with having these toilets available for purchase in the early 2000s. Definitely NOT new.

Even a world-recognizable Japanese technology company had had intelligent toilet sensors on the market for years already.

In September 2018, electronics giant Panasonic released a health-tracking toilet in China that tests the urine for blood, protein, and other key health indicators. The device also uses sensors embedded in an armrest to measure a person’s body fat and identify different users by scanning their fingerprints.

That’s a really good insight into why Stanford went to Korea to make a knock-off of Japanese designs — failed to partner with a Japanese company to design and release something that has been designed and released already for over a decade.

All this speaks to the weird relationship that American academic institutions have with journalists who publish unverified puff and PR instead of actual news.

Stanford somehow gets away with this regularly, along with brandishing a name that represents crimes against humanity.

Anyway, here are just some of my old slides from 2013, including examples for discussion of privacy technology for toilets well as some data from places like Chicago doing analysis of drug usage (illegal/counterfeit) on wastewater. 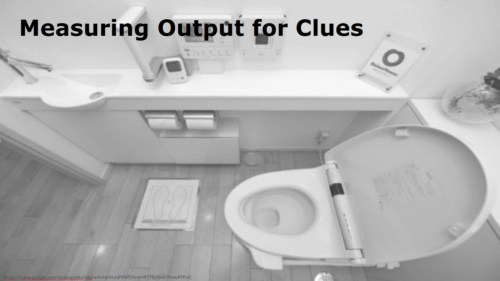 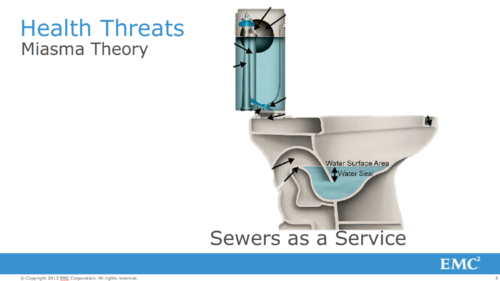 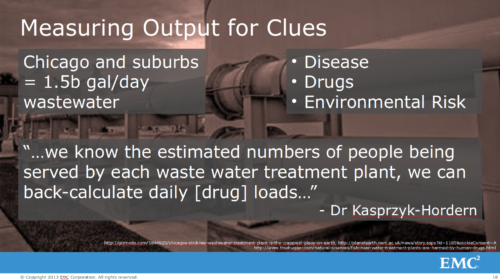 And I guess I also should mention in 2019 I wrote about all this with the title “Yet More Shit AI“.