If someone continuously shames surveillance (as if pursuit of knowledge is a bad thing inherently) they’re headed down the dangerous and dark path of criminalizing knowledge.

Let’s be honest here. Facebook’s business model is not surveillance, it is slavery (an extreme form of debt capitalism). Here’s how a paper from 2016 laid out the problem:

…virtual world technology not only allows real-time synchronous communication and economic activity between users (who are commonly represented usually by graphical avatars), but also allows for the accurate logging of even the smallest economic activities that occur…

Renaming themselves to Meta is related to their quest to create a slavery world where people entering hand over their entire existence and then are prevented from owning their own bodies (whether work or leisure, public or private, as I warned in 2016 and illustrated again in 2019). 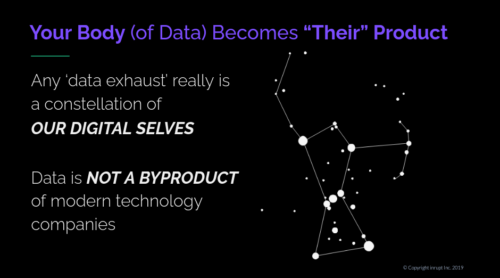 It is wrong to equate slavery to surveillance. This is like someone equating prison to building homes. Not all surveillance is bad. Not all homes are bad.

Do not criminalize knowledge, do not shame gathering all knowledge just because in some cases it is wrong. That will backfire in a VERY bad way by ushering in even more harms from ignorance.

Parents surveil their children for safety, within an ancient consent model everyone is familiar with.

Doctors surveil their patients for rational reasons, as surely everyone would agree. Healthcare requires such a granular user surveillance model that breakthroughs in safety depend on a battery of monitoring devices. Science depends on surveillance so granular it’s literally microscopic.

Thus we must stop calling surveillance evil, given it’s the slavery built on top of surveillance that is evil. Surveillance capitalism sounds about as bad as intellectual property. Are we really prepared to say people shouldn’t ever be allowed to sell what they know?

Facebook is an exemplar of surveillance capitalism, harvesting as much data as possible, pursuing scale at all costs, and coercing users toward clicking on ads and spending more time on the platform. It has no other appreciable values, certainly no moral ones, no matter what narrative Zuckerberg might retcon onto the company’s history. (The original sin of TheFacebook, of course, was Mark Zuckerberg’s libidinous mission to rank Harvard’s coeds by relative hotness.)

Everything distasteful about Facebook, including its unmanageable size, flows from its business model, which is infinitely scalable. Yes, we should break Facebook up, but we also must break its business model of ever more granular user surveillance.

Nobody should try to white wash slave plantations granular user surveillance platforms, since the actual business model is human trafficking. And you can’t just walk away from that fact, as Steven Levy sagely warns:

…hold on, Mark. The Company Formerly Known As Facebook, which I will henceforth refer to as TCFKAF, can’t really move forward on that course until it repairs the vehicle that got it where it is. No matter what Facebook is called now, its crisis is ongoing.

A metaverse migration raises a ton of thorny issues that Zuckerberg’s keynote skated over, or just didn’t mention. If we have such a big disinformation problem now, what would it be like if everything around us—from clothes to real estate to, well, ourselves—was made of information? How can you justify building a whole new economy based on buying virtual products when so much of the world’s population can’t afford basic real-world products?

TCFKAF has likely calculated that creating a world where their crimes against humanity go without any prosecution will have higher margins than the real world where they have to buy up all the lawyers and politicians to monopolize the courts and deny reality… thus renaming themselves to Meta.

…a “meta” in gaming terminology is a generally agreed upon strategy by the community. Said strategy is considered to be the most optimal way to win / has the best performance at a specific task. Some people have defined meta as an acronym meaning “most effective tactics available”.

Sounds like someone declaring themselves the “meta” as an act of obfuscating things to avoid admitting to that something they’re doing is objectionable. Like when American slaveholders called themselves “planters” to obfuscate their business model of raping women.

Branding yourself community leader when the community hates you isn’t supposed to work… Meta (μετά) in Greek means “above” (or beyond, after), such that TCFKAF is branding themselves above the law, or beyond the reach of the law.

In other words it it will be surveillance of TCFKAF that will bring the kind exposure and interventions that could help end their slavery practices. Leaking internal documents scares them because it is a form of surveillance of their crimes against humanity. I will bet anyone that coming Facebook announcements about “improving privacy” will be little more than thinly veiled attempts by them to destroy evidence of their crimes, only to continue them more secretly.

TCFKAF must have realized they were about to come under surveillance, and lose the game they thought they couldn’t lose; increased granular monitoring of their behavior started to generate public outrage, so they destroyed evidence and renamed themselves to God (as if a clever way to avoid punishment for immorality).

This was ironically raised in a recent heartfelt story by someone who decided not to be a spy:

…I had come round to the idea of watching people for a living, swept up in my escape fantasy I hadn’t given much thought to how it would feel to be watched myself.

So can we stop talking about surveillance already and instead just admit TCFKAF’s business model is slavery?