For five years in early American history (1792-1797) a genius published almanacs with copious information about the seasons.

Benjamin Banneker, who was self-taught, informed Americans of crucial science of the time to aid in trades including agriculture and fishing: astronomical calculations, cycles of locusts, phases of the moon, tide charts and more. 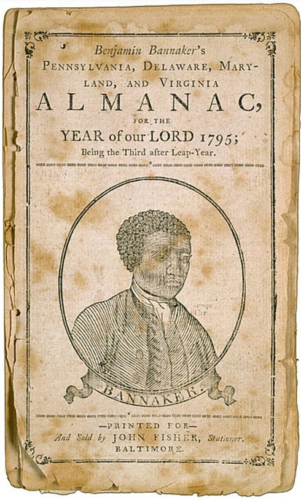 He even submitted the first edition of his almanac to slaveholder Thomas Jefferson (secretary of state at that time) as a form of proof that all Black Americans should be emancipated. 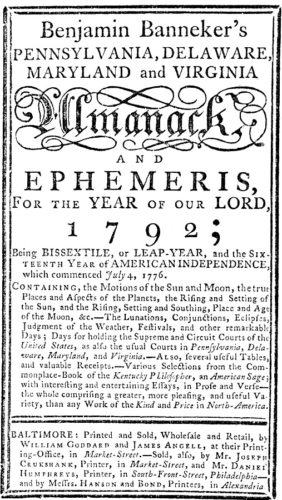 Sir, I thank you sincerely for your letter of [August] 19th. instant and for the Almanac it contained. no body wishes more than I do to see such proofs as you exhibit, that nature has given to our black brethren, talents equal to those of the other colours of men, & that the appearance of a want of them is owing merely to the degraded condition of their existence both in Africa & America. I can add with truth that no body wishes more ardently to see a good system commenced for raising the condition both of their body & mind to what it ought to be, as fast as the imbecillity of their present existence, and other circumstance which cannot be neglected, will admit. I have taken the liberty of sending your almanac to Monsieur de Condorcet, Secretary of the Academy of sciences at Paris, and member of the Philanthropic society because I considered it as a document to which your whole colour had a right for their justification against the doubts which have been entertained of them. I am with great esteem, Sir, Your most obedt. humble servt. Th. Jefferson

Despite kind words allegedly things didn’t change and the slippery Jefferson recanted his praise of Banneker, not to mention ceased any efforts at ending slavery.

Jefferson’s reply fell far short of addressing the political, religious, and ethical challenges that Banneker had put forth… a question which the future president chose not to debate with the freeman: the fundamental contradiction between the principles of democracy and freedom and the cruelty of slavery, passionately voiced by Banneker. Jefferson, it seems, saw Banneker’s intelligence as an exception among African-Americans, rather than evidence that Jefferson’s perceptions about race might be fundamentally flawed. Sadly, three years after Banneker’s death in 1806, Jefferson wrote to Joel Barlow, an American poet and politician, disparaging the by-then well known Banneker and arguing that he could not have made the calculations contained in the almanac without assistance.

Jefferson’s disparagement in today’s terms would look like accusing someone of being part of an extra-national membership (e.g. Catholicism, Judaism, Islam) as if their thoughts are owed to some other group, or come from outside intervention. It’s an encoded way to call people puppets and unintelligent.

An antique cartoon (The American Anti-Slavery Almanac for 1840) illustrates the absurdity of Jeffersonian racism: 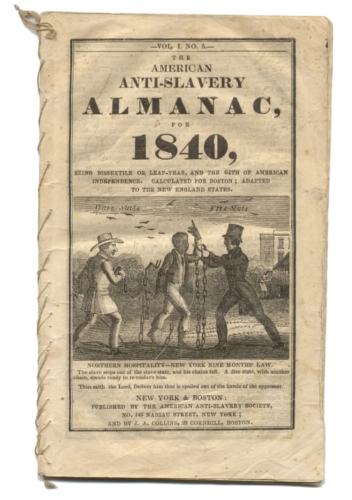 Jefferson was obviously wrong about perpetuating slavery, and also wrong in discrediting the genius of Banneker by assigning him a false association.

Unfortunately, very little of Banneker’s revolutionary and pioneering work remains since his house was “mysteriously” set on fire and all his works completely destroyed on October 11, 1806 the day he was buried. Jefferson attempting to destroy the reputation of an American icon was foreshadowed by men attempting to destroy any evidence of that icon’s legacy.

One of the items destroyed, for example, was a famous wood clock he had made that had kept accurate time for decades. It is hard to overstate the significance of being self-taught yet making a precisely accurate clock out of wood in the 1700s.

Many historians believed that Banneker’s clock is the first one made entirely in the USA.

Or as Stevie Wonder put it even more generally in his song Black Man:

Arguably, based on the Library of Congress collections, Banneker was a colleague or even a peer of George Washington and Thomas Jefferson. In other words, we know about him primarily because records preserved on behalf of Washington and Jefferson (not to mention records made by Stevie Wonder).

It begs the question whether the genius of Banneker should have been afforded an even greater influence over American calendaring and timekeeping.

His almanacs remind us of the lunisolar calendars found around the world, which track agricultural cycles and the significance of environmental observation. Consider the Japanese documentation of poetic nijūshi sekki (twenty-four seasonal divisions), which achieves national significance as works of art.

Here you can see how Japan assigns three kō to every sekki, each about a week long.

Describing the “waxing and waning of the moon and the movement of the sun across our skies” is exactly what Banneker was so adept at in his almanacs.

Imagine what his legacy — so violently uninterrupted — should look like today had it been allowed to flourish; perhaps wonder whether climate change in America would be so controversial in 2022 if the existence of Banneker himself, a genius freeman in America, hadn’t been so controversial 230 years ago (let alone today).

Or as another cartoon put it in 1876, called “In Self Defense: Southern Chivalry”…