General Sherman’s campaign of 1864 to expediently end the Civil War blew straight through an infamous Confederate General on June 14th northwest of Atlanta, near a small hill known to this day as Pine Mountain.

The infamous Bishop Polk was dead, and it was a cracked cipher that confirmed this for the Union armies liberating the South.

Here’s how it happened. Sherman had been riding about to plan troop movements when he joined one of his forward batteries and noticed a group of conspicuous enemy observers atop a nearby hilltop.

A quick order was dispatched by Sherman to the chief of artillery serving under Major General David Stanley.

After taking a good view [with his glass towards Pine Mountain] he turned to the officer in command, saying, “Captain Simonson, can you send a shell right on the top of that knob? I notice a battery there, and several general officers near it?”

The captain fired, and the general looked on with his glass.

“Ah, captain, a little too high; try again, with a shorter fuse;” and up went the glass to the eye. Away went the shell, tearing through General Bishop Polk in its course.

“That will do,” said Sherman, shutting down his glass.

It is said that Johnston and Hardee were on their horses beside Polk when he fell, and when the first shell came they remarked, —

“It is safer to alight.”

Polk smiled, and still staid surveying our position, and thus met his death.

The men on a hilltop making themselves into an easy target, as it turned out, included top Rebel leader General Joseph E. Johnston, (commander of all Confederate forces in the campaign) and his corps commanders Generals William Hardee and Leonidas Polk.

Some context might help here, since it sounds strange in 1864 to be so awkwardly positioned against the expert warrior Sherman laying down accurate fire.

Despite Polk being a West Point graduate (reportedly ranked eighth in a class of 1827) he stood as a prime example of the corrupt American patronage system that before the Civil War had floated men into leadership roles despite lacking talent or judgment for their position. His cousin James “true villain” Polk, who decades later became President, probably deserves even harsher criticism than Leonidas.

Leonidas Polk’s “career” immediately after West Point was to become an Episcopal clergy. This apparently meant preaching slavery and rising to Bishop of Louisiana by 1841 where he notoriously initiated a drive to establish a “university” to further the cause of slavery.

Polk rooted the identity of the planned university in the region defined by slave-based plantation agriculture… virtually all of the university’s early leaders held persons in bondage; in some cases, they held hundreds captive as slaves…

When Civil War was started such immoral dedication to the preservation and expansion of slavery was even more clear. His very close West Point friend, Confederate President Jefferson Davis, gifted Polk a top military commission as Major General despite lacking any real qualification.

Without question the inexperienced and often easily distracted Polk, the eldest General of the rebellion, delivered little more than a string of significant failures. In one case his “success” was from getting disoriented and accidentally riding behind enemy lines where he excitedly called for a cease-fire to protect himself in order to escape back to his own side (where he then ordered the massacre of those who had agreed to his call for ceased-fire).

Perhaps most notably with great fanfare he stupidly violated Kentucky’s neutrality on September 4, 1861 by marching pro-slavery Rebels to occupy the town of Columbus.

…in an attempt to keep Kentucky out of the war, the state officially declared neutrality when Governor Magoffin and the Kentucky General Assembly passed declarations of neutrality on May 20, 1861. Kentucky’s neutrality would not last long, on September 4, 1861 the town of Columbus, Ky. was occupied by the Confederate Army. On September 6, 1861, the General Assembly passed a resolution calling for Confederate troops to leave Kentucky; soon after, Kentucky declared their allegiance to the Union ending their status of neutrality.

His move was a completely avoidable disaster. When General Braxton Bragg, another friend of Davis, rose to command over Polk he awkwardly charged him with disobeying orders in the Perryville failure.

Polk arrived at Perryville late in the evening of October 7 and took command of the 17,000 Confederate troops assembled just north of the town. Bragg issued orders for Hardee and Polk to strike the pursuing Federals a hard blow. “Give the enemy battle immediately,” wrote Bragg. “Rout him, and then move to our support at Versailles.” […] When Bragg arrived at midmorning, his mood turned sour when he learned that Polk had taken a defensive stance rather than an offensive one.

Bragg demanded a court-martial for the bumbling Bishop Polk.

However, Polk’s qualifications centered on being a West Point buddy of Davis who not only denied Bragg’s demands but eventually dismissed Bragg instead to appoint Johnston commander (who was then baptized by Polk).

It is from this context of sad patronage and incompetence that we should look upon the hilltop in Georgia where Johnston and Polk stood together foolishly exposed to Sherman.

Captain Simonson’s first timed fuse three inch Hotchkiss shell fired from an Ordnance cannon had passed over the group of Rebel leaders, which of course would have set off alarms. 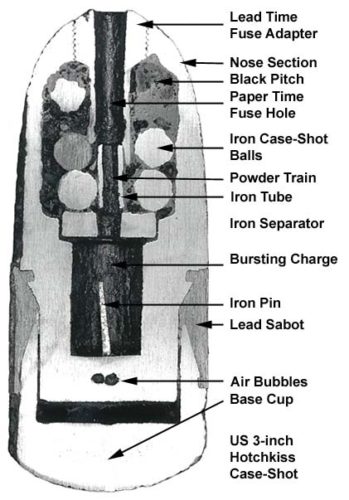 At this critical moment Polk dithered and delayed (walked slowly in the line of fire) while the others astutely moved away; by the time a third round had been fired a three inch solid shot had directly landed through his chest and killed him.

Washington DC was notified after a day had passed, in a brief dispatch from Sherman to Secretary of War Stanton, sent June 15th at 6:30pm.

We killed Bishop Polk yesterday, and made good progress today…

I first ordered… the batteries in front of Pine Hill occupying the attention of the enemy. One of these shots killed Bishop Polk. The movement was perfectly successful, and this morning Pine Hill was abandoned to us, strongly fortified. […] Losses to-day very small, it having been one grand skirmish, extending along a front of eight miles. An intercepted dispatch reports the death, by a cannon-shot, of Bishop Polk, and it is confirmed by the prisoners.

A Union signal officer cracking the weak Confederate signal code in fact revealed that an ambulance had been called to take Polk’s body off the hilltop.

Simonson had received credit for an accurate and decisive blow to the enemy, yet repositioning artillery just a day later he was killed by a Rebel sniper (note Sherman’s comment on small losses).

One might think Polk’s men would have rejoiced at the end of their ineffective Bishop who had brought shame and continual failures. Had Polk lived a little longer it seems Davis was on track towards demoting Johnston and putting Polk back in charge, which undoubtedly would have had the effect of losing their war even faster.

Instead, we often find an opposite sentiment in Rebel folklore including severe morale decline, as seen in this absurd retelling:

The most remarkable thing about him was, that not a drop of blood was ever seen to come out of the place through which the cannon ball had passed. My pen and ability is inadequate to the task of doing his memory justice. Every private soldier loved him… When I saw him there dead, I felt that I had lost a friend whom I had ever loved and respected, and that the South had lost one of her best and greatest generals

That bizarrely embellished version of events is from Private Sam R. Watkins’ 1882 memoir Company Aytch. It shows a kind of absurd fealty that contradicts facts in two obvious ways.

First, we already know Bragg and Polk were in constant bitter feuds so to say every soldier of the South loved anyone is a stretch.

One who delves deeply into the literature of the period may easily conclude that Southerners hated each other more than they did the Yankees.

Second, a correspondent of the New York Herald, David Power Conyngham, wrote an 1865 book called Sherman’s March through the South with the following gruesome reality about Polk’s blood.

When we took that hill, two artillerists, who had concealed themselves until we had come up, and then came within our lines, showed us where his [Polk’s] body lay after being hit. There was one pool of clotted gore there, as if an animal had been bled. The shell had passed through his body from the left side, tearing the limbs and body to pieces. Doctor M—– and myself searched that mass of blood, and discovering pieces of the ribs and arm bones, which we kept as souvenirs. The men dipped their handkerchiefs in it too, whether as a sacred relic, or to remind them of a traitor, I do not know.

Even the official funeral statements made special reference to the copious blood expected from the three inch hole blown through Polk.

In the left pocket of his coat was found his Book of Common-Prayer, and in the right four copies of a little manual entitled ‘Balm for the Weary and Wounded’. Upon the fly-leaf of three of these had been written the names respectively of ‘General Joseph E. Johnston,’ ‘Lieutenant-General Hardee,’ ‘Lieutenant-General Hood,’ ‘with compliments of Leonidas Polk, June 12th, 1864.’ Upon that of the fourth was inscribed his own name. All were saturated with his blood.

Watkins’ version of Polk is basically nonsense. The disconnect might be explained by that “Balm for the Weary and Wounded” text reference. It was an 1864 guide by Polk’s Chaplain for the self-described “Christian soldiers”, meant to help them remain faithful through dedicated prayer time twice a day.

On the one hand that might be seen as a basic prayer book to help relieve suffering through faith.

On the other hand, and by today’s standards, the Bishop’s book comes across far more like something Americans might balk at as sentiment found in extremist groups like Al Qaeda or ISIS.

I am not exaggerating here, as an Al Qaeda training manual seized in a Manchester, England raid by police has similar tones about preaching and constant prayers.

If a Muslim is in a combat or godless area, he is not obligated to have a different appearance from [those around him]. The [Muslim] man may prefer or even be obligated to look like them, provided his action brings a religious benefit of preaching to them… As for prayer, the book (Al-Manhaj Al-Haraki Lissira Al-Nabawiya) quotes Al-Bakhari that “he [the Moslem] may combine the noon and afternoon [prayers], sunset and evening [prayers]. That is based on the fact that the prophet – Allah bless and keep him – combined [prayers] in Madina without fear or hesitation.”

Does it help Americans at all to think of this Bishop in 1864 as deserving of death in the same way as a leader of Al Qaeda might be treated today — a religious extremist and avowed enemy of America coming to a violent end from a highly targeted projectile?

It does remind me of an allegedly popular and “inspirational” deputy leader of Al Qaeda (after Ayman al-Zawahri replaced bin Laden); Abu Yahya Al-Libi was killed in 2012.

Reuters reported that intelligence officials who intercepted conversations among terrorists after the drone strike indicated that Al-Libi had died.