I reported on an Ice Virus outbreak in Russia at the end of 2010 that affected nearly half a million people in Moscow — critical infrastructure failed.

Now Texas is the one failing from the same attack and infestation.

Perry was quoted as blaming the problems on “unprecedented demand on the state’s energy grid” and saying experts were working “to ensure power is restored as quickly as possible.”

But it was Lt. Gov. David Dewhurst who met with the executives of the state’s power grid manager, ERCOT, and the heads of power generating companies. He said Wednesday that the problem was the failure of some newer plants to sufficiently weatherize.

Dewhurst noted that power demands, while high, were about 20 percent less than what the state handles during peak summer months.

Democrats accused Perry of falling down on the job. The governor “was paying so little attention to the ice storm during his five day trip to California that his own press release misstated the reason for the rolling blackouts,” said Matt Angle of the Democratic Lone Star Project.

I am surprised the Governor was so removed from the situation and made misstatements while his state’s residents suffered through rolling blackouts. It seems obvious, even to an outsider, that demand would not be higher than during the hot summers. Likewise, it seems odd that water pipe failures at just two coal power plants, Oak Grove and Sand Hill, would cascade to 50 more plant failures and have such an impact.

Is your infrastructure prepared for the Ice Virus? Severe weather might actually pose a far greater risk than Stuxnet.

Meanwhile in Antarctica, wind farms have been operating for three years already.

The wind farm reduces the carbon footprint of the Antarctic operations, as well as the environmental risks associated with transporting diesel fuel. The bases’ annual fuel consumption has been cut by approximately 463,000 litres. Greenhouse gas production from both bases has been reduced by 1,242 tonnes of CO2.

Texas operates on its own by design and during the current winter storm bad things happened yet again. 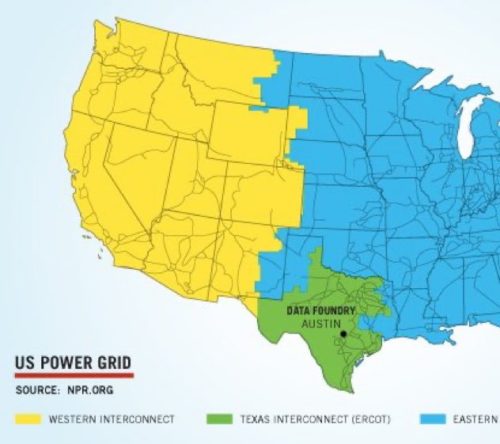 The ICF (consulting firm founded 1969 by a Tuskegee Airman) outage report tells us the 2011 winter led the self-isolating Texans to the wrong solutions, poor decisions, and gas production failed to deliver during cold:

Gas is blamed so directly for failure to operate. They even make a point to emphasize this was not a renewable energy issue:

Thermal outages, rather than renewables, are the main supply gap.

I know it will become fashionable to say nobody modeled the power system dealing with cold weather (winter storm warning) across all 254 Texas counties but that is LITERALLY WHAT THIS 2011 BLOG POST WAS ABOUT — cold weather change is coming to Texas and it better start planning like Moscow for an “Ice Virus” national security disaster.

And Texas politicians shamelessly boasted as late as 2020 that they were the best planners for energy management, trying to shame Americans outside of Texas. 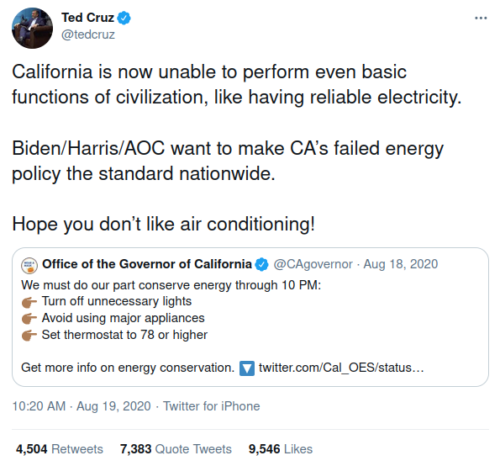 To put it another way, Texas chose to build only a tiny renewable energy sector and when the gas energy fell offline with nearly 50% failure rates… it’s time to accept responsibility.

Blame Texas gas energy management directly for their totally predictable failure while trying to shame others for what they did themselves.

It’s ridiculous for anyone to say renewables should have suddenly kicked in for a state that didn’t setup weatherized renewables to kick in when their gas systems failed.

On that note, it’s interesting to also read huge amounts of Texas oil production was shut down from an inability to get gas power:

That’s a LOT of oil wells and refinery to be taken offline. In addition, the same article says gas infrastructure isn’t able to scale to meet demand across a very large region:

For more detail on this, another article is clear about causes of electricity outages, gas failures:

Officials for the Electric Reliability Council of Texas, which manages most of Texas’ grid, said the primary cause of the outages Tuesday appeared to be the state’s natural gas providers. Many are not designed to withstand such low temperatures on equipment or during production. By some estimates, nearly half of the state’s natural gas production has screeched to a halt due to the extremely low temperatures, while freezing components at natural gas-fired power plants have forced some operators to shut down.

And then they get down to the basic facts with a quote from Michael Webber, an energy resources professor at the University of Texas at Austin:

Texas is a gas state. Gas is failing in the most spectacular fashion.

Even more evidence of this gas failure comes from a tweet by Jesse Jenkins, Professor at Princeton and a prominent energy expert:

As of ~10 AM Eastern time [Monday the 15th], the system has ~30 GW of capacity offline, ~26 GW of thermal — mostly natural gas which cant get fuel deliveries which are being priorities for heating loads — and ~4 GW of wind due to icing. That is a HUGE amount of gas capacity offline, about 30% of total ERCOT capacity and ~half of the natural gas fleet… devastating for reliability

Joshua Rhodes, another energy expert looking at the data, says essentially the same in his tweet

Over 30 GW of generation still down in ERCOT! ~27 GW thermal, or about 35% of all thermal capacity.

Yet, even more importantly, Rhodes also tweeted on the 14th (along with pointing out all systems were affected by the storm) that wind-farms in Texas (albeit very small) over-produced energy far above normal output, because of the… wait for it… high-winds. 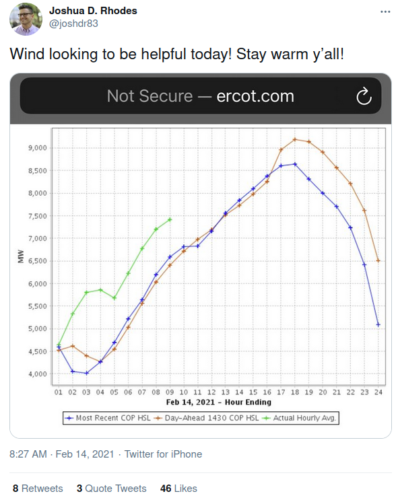 Windmills in winter easily can heat their blades and avoid outages, as innovators around the world already documented. Something tells me, however, the real selling point of ice-shedding windmills to Texans would be an opportunity to buy more armored Suburbans that guzzle gasoline:

Or look at it this way, a simple table shows wind farms doing ok in a winter storm (forecast demand of 1.8, actual 4.5) yet gas coming up massively short at a much higher scale, leaving a huge -21 deficit in how Texas alone manages its energy. 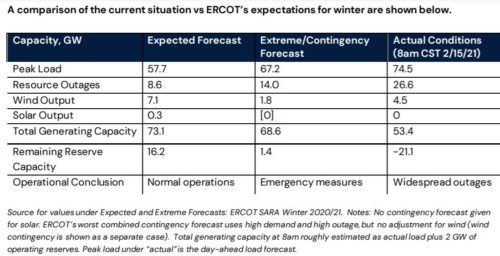 The numbers don’t lie. The difference from 2011 for me is that investigations will have to start now into whether gas production was shutdown intentionally because of cruel Texas market manipulation and gouging… and Texans willfully ignoring crisis, as well as spending millions on lobbying to prevent better options, all after at least a decade of warnings to weatherize. Some tie it back to 1989 when “wind chills reached 14 degrees below zero”.

Speaking of 1989, that was just a couple years after Enron was started, as Mark Sumner tweeted.

On Monday electricity in Texas approached a rate that would make the average home monthly bill around $96,000… If any of this—purposely constrained market, free floating prices subject to wild changes, consumers facing blackouts—rings a little bell at the back of your head, there’s also this: Enron got its start dabbling in these markets from it’s Houston, TX HQ in the 1980s

A Texas political scientist tweeted that not only does Texas isolate itself to have monopoly control (private regulation to prevent public regulation) in a closed market for energy distribution and pricing, it just used that factor in a disaster to turn down its gas to reduce operating costs while charging Texans higher rates. 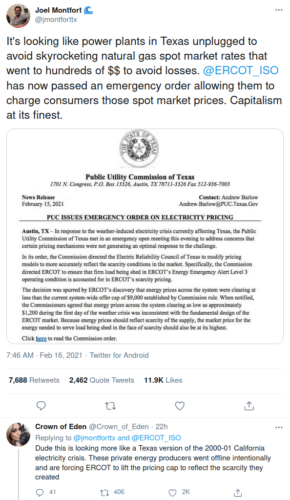 Dude this is looking more like a Texas version of the 2000-01 California electricity crisis. These private energy producers went offline intentionally and are forcing ERCOT to lift the pricing cap to reflect the scarcity they created.