The Drinks Business has just posted a story of an American visiting the northern town of Garda, Italy who objected to wine bottles decorated with images of Adolf Hitler.

The shopkeeper allegedly told [Philadelphia lawyer Matthew] Hirsch that the bottles were part of history, “like Che Guevara.” “The only crime that could be currently attributable to this is that of apologising for fascism,” prosecutor Mario Giulio Schinaia told news agency Ansa. “At this point though, it would be opportune to invent the crime of human stupidity,” he added. The mayor of Verona said the bottles will be removed from the supermarket.

I am surprised he tried to use “like Che Guevara” as some kind of fancy intellectual insult instead of just saying the classic snide phrase “like your mom”.

Apologizing in Italy for fascism was made a crime in 1952. What is left out of the story is that this is not an isolated case (pun not intended).

Those traveling in northern Italy will often find souvenier imagery of Hitler in shops. I have noticed it myself. When I asked shop keepers in 2001 for an explanation they gave me a simple one:

Austrians love Hitler paraphernalia so they come to buy it from Italy.

Here is a photo I took of a case of mini-bottles of wine displayed prominently in a convenience store in Assisi, Italy. 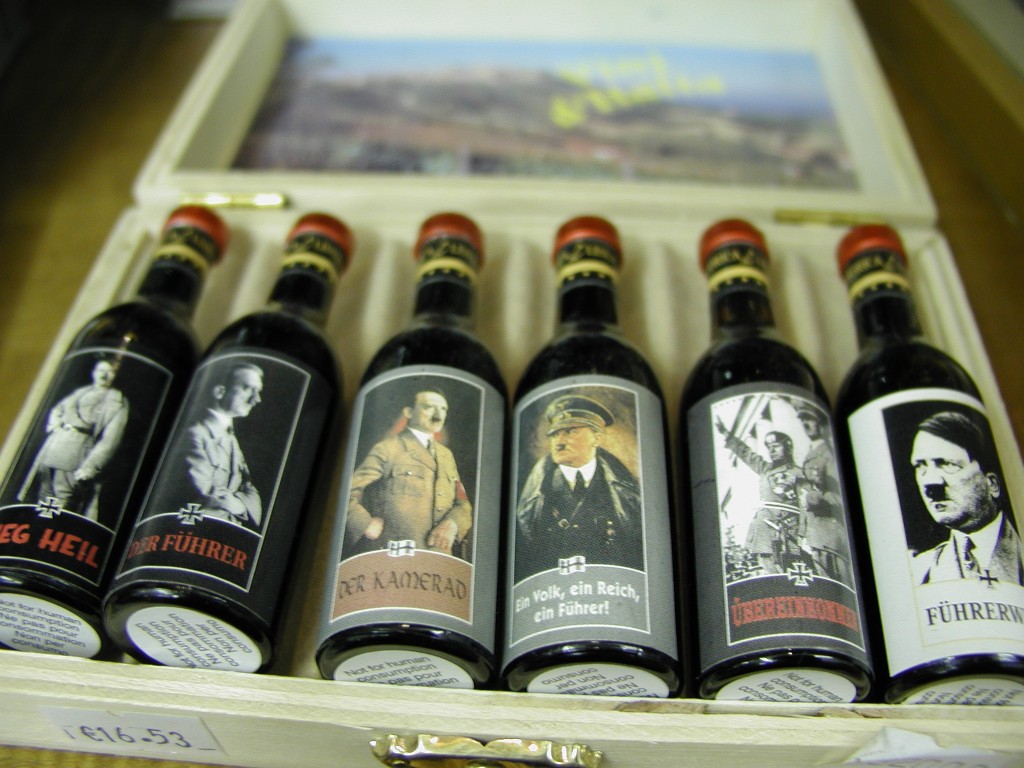 The yellow words with a pretty picture above the wine when you open the box cover say “Vino d’Italia”; that’s Italian for the “wine of Italy”.

Basically the stricter regulation in Austria against “promoting or glorifying” the Third Reich has created a market in Italy.

Even Austria’s law, however, earlier this year was tested and failed. The Daily Mail explains that “You can sell Hitler schnapps!”

…state prosecution official Heinz Rusch said the investigation ended because of a lack of proof that it was intended to glorify the National Socialist era. He said the 48-year-old, known as Roland M by prosecutors, from Vorarlberg in the east of the country, was motivated by profit and not by ideology.

Should consequence be ignored when it lacks ideological motive? Likelihood of harm obviously will be far higher if protected by a profit clause. Meanwhile, popularity for Hitler is found even among the Austrian youth, as the Daily Mail also warns.

…new survey asked youngsters aged between 16 and 19 what they thought of the dictator. Pollsters were astonished when 11.2 per cent of them said that Hitler ‘did many good things for the people’.

And who are the people? Protip: genocide isn’t great for people.

Maybe it should have asked whether Hitler did good things for their mom.

Or perhaps these Austrian kids are so ignorant of history (in a culture famous for cover-ups) and confused by the Italian merchants that they think Hitler is just some brand of cheap wine they’ve been buying?

Human stupidity clearly is not a crime, and the Italians seem to think of it as good for profits.