December 24 is a celebration in America of copying a recipe from Britain, making an inexpensive version of it, then proclaiming it as our own.

As with most things considered distinctly American, eggnog is a tweaked and tinkered version of an import. The story, as I heard it many years ago, is that a fashionable drink that grew during the Tudor dynasty (1485-1603) called syllabub was imported and renamed in America, as it died off in England.

The drink started with the fact that only the well-to-do of England before the 1700s could own cows and afford to drink milk fresh hot from the source let alone laced with exotic spices and expensive alcohol.

THE principal sale of milk from the cow is in St. James’s Park. The once fashionable drink known as syllabubs — the milk being drawn warm from the cow’s udder, upon a portion of wine, sugar, spice, — is now unknown.

The once fashionable celebratory drink is now unknown, says this person in 18th Century London. It was relegated to the recipe books such as the 1786 “Complete English Cook“, buried among the many other options.

Some have written that Posset, not Syllabub, is the correct lineage for today’s celebratory drink. I find this to be a leap, given that London cookbooks of 1762 categorized Posset in this context:

I. Of Soups, Broths and Gravy.
II. Of Pancakes, Fritters, Possets, Tanseys

Pancakes, Fritters and Tanseys all are fried, which leaves Possets to be cooked into a curdled cream or even a custard.

Some have pointed to an even starker context: Shakespeare’s Macbeth reference to the posset as a healthy nightcap, a drink conveniently easy to poison before bed.

The doors are open, and the surfeited grooms
Do mock their charge with snores. I have drugg’d their possets
That death and nature do contend about them,
Whether they live or die.

The poison context seems a bit off. Spiced anything is easy to poison. Anyway the greater context is the “health” aspects of a posset, which were rooted in medieval times. Eating a cooked (sanitized) protein and alcohol slurry may have given the appearance of curing the sick because better than not eating at all. (From Eearly English Book Online “Food and Physick”, for which 18th Connect gives a sneak preview)

Another special Preservative: Take an Egge, make a hole in the top of it, take out the white, and the yolk, and fill the shell only with Saffron; roast the shell and Saffron together, in Embers of Charcole, untill the shell wax yellow; then beat shell and all together in a Morter, with half a spoonful of Mustard-Seed: Now so soon as any suspition is had of Infection, dissolve the weight of a French Crown, in ten spoonfulls of Posset-Ale, drink it luke-warm, and sweat upon it in your naked Bed

Enjoy your medicine. Yuck. In other words, the medicinal muck of a posset served in a person’s darkest hour, as they lay waiting for death, is unlikely to be a direct root for today’s party serving eggnog. There is a transition/fork at the very least from posset to syllabub, or perhaps a disconnect, when milk with spice and booze became fashionable for partying. A modern descendant of posset is more likely to be kumyss.

I mean syllabub, hot milk pulled from the udder and mixed with flavorings, is typically for celebration not solitary nightcaps or plagued deathbeds. Thus syllabub makes far more sense when you think about what you’re doing with eggnog today.

The demise and intellectual property transfer of syllabub

Serving syllabub at parties lost favor in England around the time its colony (e.g. America) was importing anything it could for celebratory significance. Dairy economics of the colonies were a key factor in transfer of high-brow beverage to common table. Privileged recipes of status in England easily were transformed into replicas with new resource abundances (also found with Cheddar cheese).

There was a small catch to the American colony use of syllabub. Import costs for fine wines and liquors forced change in the ingredients. Alcohol found easily on ships sailing in America — rum of the Caribbean — was an obvious substitute to start with. A more likely substitution later was based on variations of whiskey such as the corn-based bourbon (rum trade and imports were scuttled during the Revolution).

Americans became so accustomed to the English idea of a milk and spiced alcohol drink for celebrations, despite the decline in England, that an attempt at the US Army academy to regulate consumption in 1826 led to dangerous riots.

A few of the cadets took Thayer’s regulations [of eggnog] as a challenge and intended to outsmart the superintendent and his staff by having the best holiday celebration West Point had seen. The term “celebration” may not apply in this case, but the incident of the “Eggnog Riot” was something West Point had never experienced. At least seventy cadets took part in the shenanigans, resulting in assaults on two officers and destruction of North Barracks, as some of the students, in their inebriated state, had smashed several windows.

This level of anti-authority violence might need perspective. Consider how in the 1800s Americans carried forward another aristocratic tradition from England. The British Kingdom passed its Slavery Abolition Act in 1833. It took another 30 years and a bloody protracted Civil War started by the Southern states before America could abolish slavery. In 1913 a book called “Dishes and Beverages of The Old South” even recommended making syllabub as an “Old South” tradition for special occasions!

Harking back to the supper table – syllabub, as nearly as I recall, was made of thick cream lightly reinforced with stiffly beaten white of egg – one egg-white to each pint – sweetened, well flavored with sherry or Madeira wine, then whipped very stiff, and piled in a big bowl, also in goblets to set about the bowl…

Thus, today in America what we really celebrate is the commodity effect, aristocratic-like access made inexpensive, to fresh milk and alcohol. Eggnog is not the only product like this, borrowed and interpreted from the wealthy abroad without attribution. There are many others such as cheddar cheese mentioned above (officially only from the caves of Cheddar and at some point declared by a King the finest cheese in England).

Here’s a fun chart of eggnog showing up in menus over time in America, from the New York Public Library, where you can see price:

Given this history, here’s my simple recipe to celebrate America’s National Eggnog Day:

On the other hand, if you still think you want to drink the stuff of origin ala the Tudors (or at least the Victorian version of it, before it disappeared), the BBC offers this recipe from Mrs. Beeton’s 1861 “Book of Household Management”

…and just remember when she says jug or teapot that’s a reference to an aristocrat’s cow udder tended by his milk girl.

Don’t get me started on the security issues in trusting an aristocrat’s milk girl. Seriously, auditing milk girls for fraud was important business in old England. Milk often was diluted with water, for example, if the customer wasn’t watching carefully.

Instead of that hassle, just head out to a local dairy in America and ask if they will let you pull an udder for hot milk into a large bowl to celebrate Eggnog Day.

Bring this recipe and show it to the dairy:

Updated to add: Compare and contrast the original Syllabub with President Eisenhower’s Whitehouse cook book, which you can find in his archive today. Here’s a recipe for eggnog that prefers bourbon, “coffee cream” and doesn’t even mention spice until a garnish at the end. 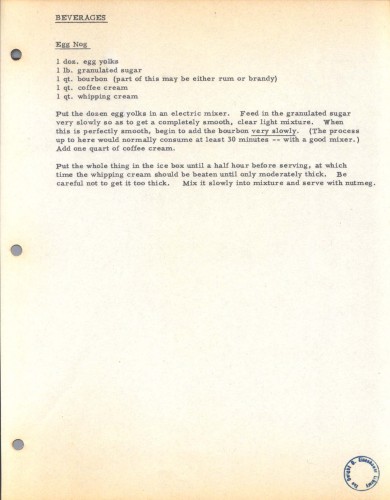