Executive summary: The popular desert called “banana split” is a by-product or modern representation of America’s imperialist expansion and corporate-led brutal subjugation of freedoms in foreign nations during the early 1900s.

Long form: If there is a quintessential American dessert it is the banana split.

Although we can go way back to credit Persians and Arabs with invention of ice-cream (nice try China) the idea of putting lots of scoops of the stuff on top of a split banana “vessel” covered in sweet fruits and syrups… surely that over-extravagance derives from American culture.

After reading many food history pages and mulling their facts a bit I realized something important was out of place.

There had to be more to this story than just Americans had abundance and desire — all their fixings smashed together — and that one day someone put everything into one desert.

Again why exactly in America? And perhaps more importantly, when?

I found myself digging around for history details and eventually ended up with this kind of official explanation.

In 1904 in Latrobe, the first documented Banana Split was created by apprentice pharmacist David Strickler — sold here at the former Tassell Pharmacy. Bananas became widely available to Americans in the late 1800s. Strickler capitalized on this by cutting them lengthwise and serving them with ice cream. He is also credited with designing a boat-shaped glass dish for his treat. Served worldwide, the banana split has become a prevalent American dessert.

The phrase that catches my eye, almost lost among the other boring details, is that someone with an ingredient “widely available…capitalized”; capitalism appears to be the key to unlock this history.

And did someone say boat?

Starting with the ice cream, attribution goes first to Italian immigrants who brought spumoni to America around the 1870s.

This three flavor ice-cream often was in colors of their home country’s flag (cherry, pistachio, and either chocolate or vanilla ice creams…red, green, and, sometimes, white). Once in America this Italian tradition of a three flavor treat was taken and adapted to local tastes: chocolate, strawberry and vanilla. Ice-cream became far more common and widely available by the 1880s so experimentation was inevitable as competition boomed. It obviously was a very popular food by the 1904 St. Louis World’s Fair, which famously popularized eating out of Italian waffle “cones”.

In parallel, new trade developments emerged. Before the 1880s there were few bananas found in America. America bought around $250K of bananas in 1871. Only thirty years later the imports had jumped an amazing 2,460% to $6.4m and were in danger of becoming too common on their own.

Bananas being both easily sourced and yet still exotic made them ideal for experiments with ice-cream. The dramatic change in trade and availability was the result of a corporate conglomerate formed in 1899 called the United Fruit Company. I’ll explain more about them in a bit.

At this point what we’re talking about is just Persian/Arab ice-cream modified and brought by Italian immigrants to America, then modified and dropped onto a newly available North American (Central, if you must) banana of capitalism, on a boat-shaped dish to represent far-away origins.

Serving up these fixings as the novel banana split makes a lot of sense when you put yourself in the shoes of someone working in a soda/pharmacy business of 1904 trying to increase business by offering some kind of novel or trendy treat.

Bananas and Pineapples Were an Exotic New Thing to Americans

Imagine you’re in a drug-store and supposed to be offering something “special” to draw in customers. People could go to any drugstore, what can you dazzle them with?

You pull out this newly available banana fruit, add the three most-popular flavors (not completely unfamiliar, but a lot all at one time) and then dump all the sauces you’ve got on top. You now charge double the price of any other dessert. Would you add pineapple on top? Of course!

The pineapple had just arrived fresh off the boat in a new promotion by the Dole corporation:

In 1899 James Dole arrived in Hawaii with $1000 in his pocket, a Harvard degree in business and horticulture and a love of farming. He began by growing pineapples. After harvesting the world’s sweetest, juiciest pineapples, he started shipping them back to mainland USA.

I have mentioned before on this blog how the US annexed Hawaii by sending in the Marines. Food historians rarely bother to talk about this side of the equation, so indulge me for a moment. Interesting timing of the pineapple, no? I sense a need for a story about the Dole family to be told.

The arrival of James Dole to Hawaii in 1899, and a resulting sudden widespread availability of pineapples in drugstores for banana splits, is a dark chapter in American politics.

James was following the lead of his cousin Sanford Ballard Dole, who had been born in Hawaii in 1844 to Protestant missionaries and nursed by native Hawaiians after his mother died at childbirth. Sanford was open about his hatred of the local government and had vowed to remove and replace them with American immigrants, people who would help his newly-arrived cousin James viciously protect their accumulation of family wealth.

To understand the shift Dole precipitated and participated in, back up from 1899 to the US Republican Congress in 1890 approving the McKinley Tariff. This raised the cost of imports to America 40-50%, striking fear into Americans trying to profit in Hawaii by exporting goods. Although that Tariff left an exception for sugar it still explicitly removed Hawaii’s “favored status” and rewarded domestic production.

Within two years after the Tariff sugar exports from Hawaii had dropped a massive 40% and threw the economy into shock. Plantations run by white American businessmen quickly cooked up ideas to reinstate profits; their favored plan was to remove Hawaii’s independence and deny sovereignty to its people.

At the same time these businessmen were cooking up plans to violently end Hawaiian independence, Queen Lili`uokalani ascended to the throne and indicated she would reduce foreign interference on the country by drafting a new constitution.

These two sides were on a collision course for disaster in 1892 despite the US government shifting dramatically towards Democratic control (leading straight to the 1894 repeal of the McKinley Tariff). The real damage of the Republican platform was Dole could falsely use his own party’s position as a shameless excuse to call himself a victim needing intervention. As Hawaii’s new ruler hinted more national control was needed the foreign businessmen in Hawaii begged America for annexation to violently cement their profitability and remove self-rule.

It was in this context that in early 1893 a loyalist policeman accidentally noticed large amounts of ammunition being delivered to businessmen planning a coup, so he was shot and killed. The pretext of armed “uprising” was used to force the Queen to abdicate power to a government inserted by the sugar barons, led by Sanford Dole. US Marines stormed the island to ensure protecting the interests of elitist foreign businessmen exporting sugar to America, despite only recently operating under a government that wanted a reduction of imports. Sanford’s pro-annexation government, ushered in by shrewd political games and US military might, now was firmly in place as he had vowed.

The Hawaiian nation’s fate seemed sealed already, yet it remained uncertain through the “Panic of 1893” and depression of the 1890s. By 1896 a newly elected US President (Republican McKinley) openly opposed by principle any imperialism and annexation. He even spoke of support for the Queen of Hawaii. However congressional (Republican) pressure mounted in opposition to him and through 1897 the President seemed less likely to fight the annexation lobby.

Finally, as war with Spain unfolded in 1898, Hawaii was labeled as strategically important and definitively lost its independence due to the American military. Ironically, it would seem, as the US went to war with Spain on the premise of ending increasingly brutal suppression of the Cuban independence movement since 1895.

Few Americans I speak with realize that their government basically sent military forces to annex Hawaii based on protection of profits by American missionaries and plantation owners delivering sugar to the US, and then sealed the annexation as convenient for war (even though annexation officially completed after Dewey had defeated the Spanish in Manila Bay and war was ending).

The infamous Blount (arguably a partial voice in these matters, yet also more impartial than the pro-annexation Morgan who has been used improperly to criticize Blount) documented evidence like this: 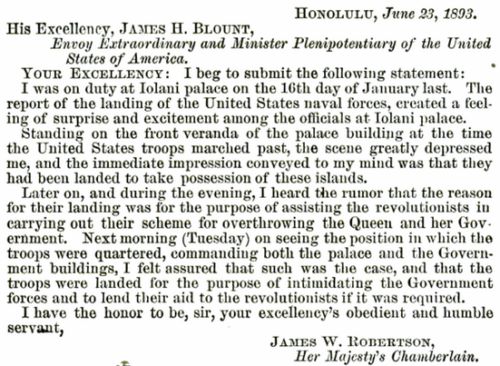 Ok, segue complete, remember how President Sanford’s cousin James arrived in Hawaii in 1899 ready to start shipments of cheap pineapples? His arrival and success was a function of that annexation of the independent state; creation of a pro-American puppet government lured James to facilitate business and military interests.

This is why drugstores in 1904 suddenly found ready access to pineapple to dump on their bananas with ice cream. And speaking of bananas, their story is quite similar. The United Fruit Company I mentioned at the start quickly was able to establish US control over plantations in many countries:

Nearly half of Guatemala fell under control of the US conglomerate corporation, apparently, and yet no taxes had to be paid; telephone communications as well as railways, ports and ships all were owned by United Fruit Company. The massive level of US control initially was portrayed as an investment and benefit to locals, although hindsight has revealed another explanation.

“As for repressive regimes, they were United Fruit’s best friends, with coups d’état among its specialties,” Chapman writes. “United Fruit had possibly launched more exercises in ‘regime change’ on the banana’s behalf than had even been carried out in the name of oil.” […] “Guatemala was chosen as the site for the company’s earliest development activities,” a former United Fruit executive once explained, “because at the time we entered Central America, Guatemala’s government was the region’s weakest, most corrupt and most pliable.”

Thus the term “banana republic” was born to describe those countries under the thumb of “Great White” businessmen.

And while saying “banana republic” was meant by white businessmen intentionally to be pejorative and negative, it gladly was adopted in the 1980s by a couple Americans. Their business model was to travel the world and blatantly “observe” clothing designs in other countries to resell as a “discovery” to their customers back home. Success at appropriation of ideas led to the big brand stores selling inexpensive clothes that most people know today, found in most malls. The irony of saying “banana republic” surely has been lost on everyone, just like “banana split” isn’t thought of as a horrible reminder of injustices.

Popularity of “banana republic” labels and branding, let alone a dessert, just proves how little anyone remembers or cares about the cruel history behind these products and terms.

Nonetheless, you know now the secret behind widespread availability of inexpensive ingredients that made this famous and iconic American dessert possible and popular.