Samsung is in a bit of a pickle. They want people to know that “voice recognition feature is activated using the TV’s remote control”. But let’s face it their disclaimer/warning that comes with a TV gave away the real story:

You can control your SmartTV, and use many of its features, with voice commands.

Nice attempt at raising awareness. Kudos for that. The first thing that jumps out at me is how vague the terms are. Second I noticed controls appear to be weak, or at least buried in some menu somewhere (“activated using your remote!” is basically meaningless). Third, Samsung clearly tries to dissuade you from disabling voice monitoring.

If you do not enable Voice Recognition, you will not be able to use interactive voice recognition features, although you may be able to control your TV using certain predefined voice commands. While Samsung will not collect your spoken word, Samsung may still collect associated texts and other usage data so that we can evaluate the performance of the feature and improve it.

So that’s a warning that your data can go somewhere, who knows where. On the other hand if you disable data collection you may be prevented from using all the features. Don’t you want all the features? Awful choice we have to make.

Samsung product management should be held accountable for a triad of failures. Really, a TV product manager should be in serious hot water. It is embarrassing in 2015 for a consumer product company of any size to make this large a mistake. We faced these issues at Yahoo product security ten years ago and I am seriously disappointed in Samsung. That also is why I find growing public outrage encouraging. 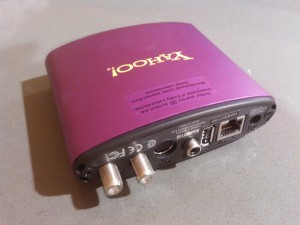 At Yahoo we had a large team focused on user privacy and safety. Research on Internet TV found novelty in a shared device with individual user privacy needs. On the mobile phone product managers could tell me “there is always only one user” and we would debate multi-user protections. But on the TV, oh the TV was different: multi-user risks were obvious to product managers and it was easy for them to take notice. The outrage against Samsung was easily predictable and avoidable.

Take for example typing your password on a big screen menu in front of a room. Everyone can see. The solution I created a decade ago was based on a simple concept: move user information to a disposable/agile security model instead of an expensive/static one. We developed a throwaway token option to register an account on the big screen instead of asking for a sensitive password.

Type your password into a private system, such as a laptop or phone, and the system sends you a number. You enter that number into the TV. Doesn’t matter if anyone sees the number. That was 2006 as we worked with TV manufacturers on how to keep data in public rooms on shared devices private. Yahoo dominated the Internet share of accounts (2 billion users) around this time so nearly every manufacturer would come through our process. Thus we could try to consult with them before bad code or devices were released.

Samsung should thought this through better on their own by now. For example commands used for the TV could require a keyword to “markup” listening, such as “Hello Samsung” and “Goodbye”. That phrase is basically never going to come up in casual conversation. Phones already do this. Remember CB radio? Lots of good verbal markup ideas there and who wouldn’t enjoy talking to their TV like a trucker?

Also important is visual indication that the TV is listening, such as an annoyingly bright LED that can’t be missed. And third a physical disable switch with tactic and visual feedback would be nice; like switching off an old Marshall amplifier. Perhaps a switch on the remote or a button that lights up like a big red “recording” indicator. And this doesn’t even get into fun answers to how the data is protected in memory, storage and over the wire.

Unfortunately Samsung just gave themselves a black eye instead. I would not buy another product from them until I have hard evidence their product management runs through a legitimate security team/review process. In fact I am now disposing of the Samsung device I did own and there’s a very high chance of migrating to another manufacturer.

Just for some comparison, notice how the camera and facial recognition were described:

Your SmartTV is equipped with a camera that enables certain advanced features, including the ability to control and interact with your TV with gestures and to use facial recognition technology to authenticate your Samsung Account on your TV. The camera can be covered and disabled at any time, but be aware that these advanced services will not be available if the camera is disabled.

The camera situated on the SmartTV also enables you to authenticate your Samsung Account or to log into certain services using facial recognition technology. You can use facial recognition instead of, or as a supplementary security measure in addition to, manually inputting your password. Once you complete the steps required to set up facial recognition, an image of your face is stored locally on your TV; it is not transmitted to Samsung. If you cancel your Samsung Account or no longer desire to use facial recognition, please visit the applicable settings menu to delete the stored image. While your image will be stored locally, Samsung may take note of the fact that you have set up the feature and collect information about when and how the feature is used so that we can evaluate the performance of this feature and improve it.

Updated Feb 23: David Lodge has dumped the network traffic and proved that it is indeed capturing and sending unencrypted text to Samsung. He writes:

What we see here is not SSL encrypted data. It’s not even HTTP data, it’s a mix of XML and some custom binary data packet.

The sneaky swines; they’re using 443/tcp to tunnel data over; most likely because a lot of standard firewall configurations allow 80 and 443 out of the network. I don’t understand why they don’t encapsulate it in HTTP(S) though.

Anyway, what we can see is it sending a load of information over the wire about the TV, I can see its MAC address and the version of the OS in use. After the word buffer_id is a load of binary data, which looks audio-ish, although I haven’t delved further into it yet.

Then, right at the bottom, we have the results: