Facebook has built a reputation for being notoriously insecure, taking payments from attackers with little to no concern for the safety of its users; but a pattern of neglect for information security is not exactly the issue when a finance guy in Sydney, Australia gives a shout-out to a Facebook user for what he calls an “amazing shot” in history:

As anyone hopefully can see, this is a fake image. Here are some immediate clues:

That’s only a quick list to make a solid point this is a fabrication anyone should be able to discount at first glance. In short, when I see someone say they found an amazing story or image on Facebook there’s a very high chance it’s toxic content meant to deceive and harm, much in the same way tabloid stands in grocery stores used to operate. Entertainment and attacks should be treated as such, not as realism or useful reporting. 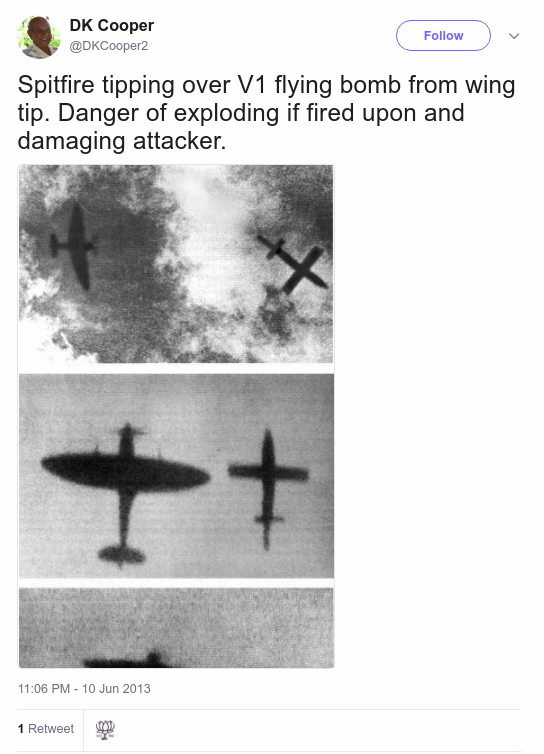 This passes many of the obvious tests above. He also inserts concern about dangers of firing bullets and reliably blowing up a V1 in air, far away from civilians, versus sending it unpredictably to ground. Ignore that misleading analysis (shooting always remained the default) and revel instead in authentic combat photo quality of that time.

After this 2013 tweet several years then pass by, and nobody talks about V1 tipping, until only a few weeks ago a “Military aviation art” account posts a computer rendered image with a brief comment:

Part of a new work depicting the first tipping of a V-1 flying bomb with a wing tip. Who achieved this?

It is a shame this artist’s tweet wasn’t given proper and full credit by the Sydney finance guy, as it would have made far more sense to have a link to the artist talking about their “new work” or even to their art gallery and exact release dates: 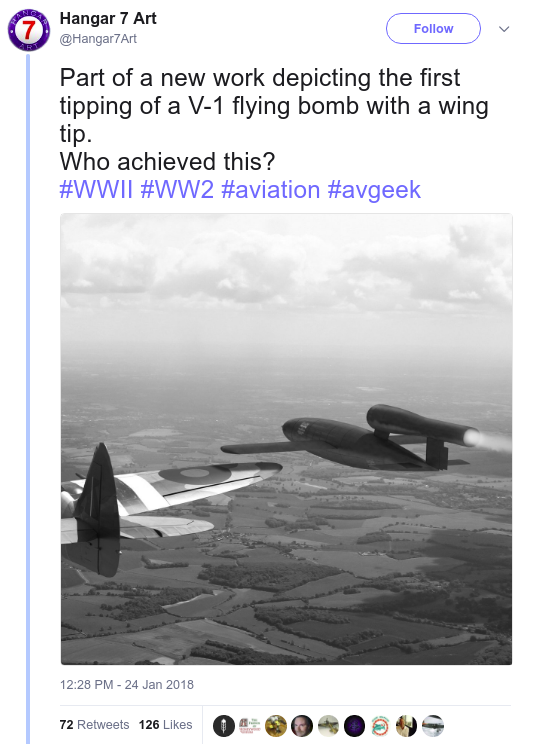 Who achieved this? Who indeed? The artist actually answered their own question in their very next tweet, where they wrote…

First to physically tip a V1 bomb was Ken Collier, 91 Squadron, in a Spitfire MkIVX. He scored 7 V1 victories and was later KIA. #WWII #WW2.

On the bright side the artist answers their own question with some real history, worth researching further. On the dark side the artist’s answer also sadly omits any link to original source or reference material, let alone the (attempted) realism found above in that “IAF veteran” tweet with an actual photograph.

The artist simply says it is based on a real event, and leaves out the actual photograph (perhaps to avoid acknowledging the blurry inspiration to their art) while including a high-resolution portrait photo of the pilot who achieved it. Kind of misleading to have that high-resolution photograph of Ken Collier sitting on the ground, instead of the one the IAF Veteran tweeted of a Spitfire in flight.

The more complete details of this story not only are worth telling, they put the artist’s high-resolution fantasy reconstruction (of the original grainy blotchy image) into proper context.

Fortunately “V1 Flying Bomb Aces by Andrew Thomas” is also online and tells us through first-person accounts of a squadron diary what really happened (notice both original photographs are put together in this book, the plane and the pilot). 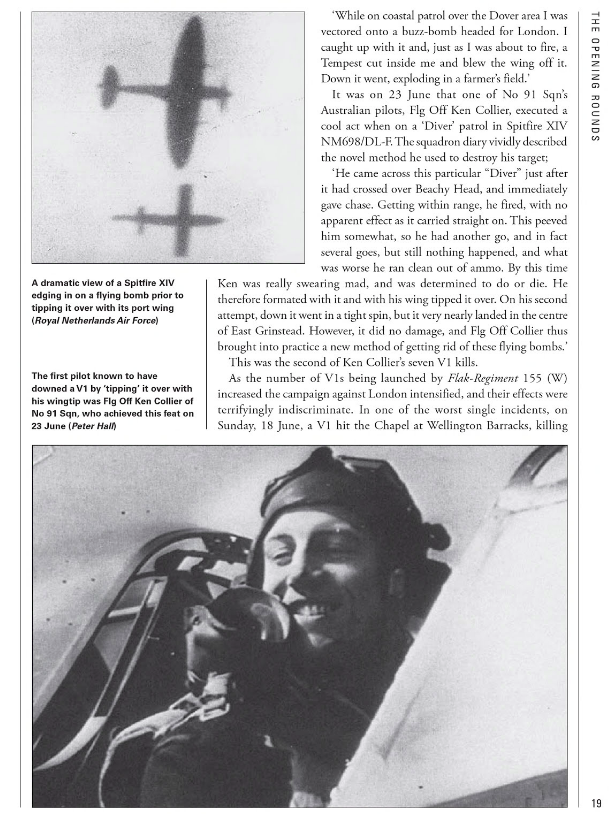 And for another example, here’s what a Vickers staged publicity photo of a Spitfire looked like from that period.

Again notice the difference between air and ground photos, even when both are carefully planned and staged for maximum clarity.

Back to the point here, V1 would be shot down in normal operations not “tipped”, as described below in a Popular Mechanics article about hundreds in 1944 being destroyed by the Tempest’s 22mm cannon configuration.

So you can see how debris after explosions was a known risk to be avoided, even leading to gun modifications to hit with longer-ranges. It also characterizes tipping as so unusual and low frequency it would come mainly at an end of a run (e.g. with gun jammed).

Just for a quick aside for what followed soon after WWII ended, as I wrote on this blog last year, things inverted — shooting drones down in the 1950s was far more dangerous than tipping them because of increased firepower used (missiles).

Compared to shooting cannons at the V1, shooting missiles at drones was more like launching a bunch of V1s to hit a bigger V1, which ended as badly as it sounds (lots of collateral ground damage).

Again, the book “V1 Flying Bomb Aces” confirms specific ranges in the 1940s were used for shooting bombs so they exploded in air without causing harm, preferred against tipping.

…the proper range to engage the V1 with guns was 200-250 yards. Further out and the attacker would only damage the control surfaces, causing the V1 to crash and possibly cause civilian casualties upon impact. Any closer and the explosion from hitting the V1’s warhead could damage or destroy the attacking aircraft.

Apparently the reason tipping worked at all was the poorly engineered Nazi technology had a gyro stabilizer for two dimensions only — flight control lacked roll movement.

Tipping technically and scientifically really was a dangerous option, because physics would send the bomb out of control to explode on something unpredictable.

Back to the curious case of the artist rendering that started this blog post, it was a Spitfire pilot who found himself firing until out of ammo. He became frustrated without ammo so in a moment of urgency decided to tip a wing of the V1.

Only because he ran out of bullets, in a rare moment, did he decide to tip… of course later there would be others who used the desperate move, but the total number of V1 tipped this way reached barely the dozens versus the many thousands destroyed by gunfire.

Shooting the V1 always was preferred, as it would explode in air and kill far fewer than being tipped to explode on ground.

Does a finance guy in Sydney feel accountable for claiming a real event instead of admitting to an artist’s fantasy image?

Of course not, because he has been responding to people that he thinks it still is a fine representation of a likely event (it isn’t) and he doesn’t measure any harm from confusion caused; he believes harm he has done still doesn’t justify him making a correction.

Was he wrong to misrepresent and should he delete his “amazing shot” tweet and replace with one that says amazing artwork or new rendering? Yes, it would be the sensible thing if he cares about history and accuracy, but the real question is centered around the economics of why he won’t change.

Despite being repeatedly made aware that he has become a source of misinformation, the cost of losing “likes” probably weighs heavier on him than the cost of having a low integrity profile. And as I said at the start of this post (and have warned since at least 2009 when I deleted my profile), the real lesson here is that Facebook loves low-integrity people.

9 thoughts on “Did a Spitfire Really Tip the Wing of V1?”