I recently met with members of state and federal government to discuss counter-drone solutions. When I brought up the 1940s drone issues they said “waaaaaht, I never” so here we go…

…training tool for anti-aircraft gunners. Such specialists were required to hit a moving target several miles up with cannon fire and it seemed an adequate thought that having a remote-piloted aircraft in training would make for more accurate gunners on the ground.

I’ll make a special side note here to mention that this concept of training anti-aircraft to hit moving targets was also the birth of artificial intelligence and “cyber”.

Cybernetics (coined from Greek kybernetes for “captain” of a ship or more literally someone who steers) was a book published in 1948 by Norbert Wiener.

It was based on his World War II experiments in anti-aircraft systems meant to anticipate planes by interpretation of radar images. And cybernetics/kybernetes should not be confused with kubernetes, which is Google’s highly popular open source software to steer swarms of drones.

By the end of 1940s there had been an overproduction of prop warplanes, which also led the US to convert its Hellcats into UAVs for target practice.

Unfortunately a 1956 incident known as “Battle of Palmdale” made this UAV concept somewhat unattractive for two reasons.

First, the US Navy lost radio connections and had to attempt to “shoot down pilotless F6F-5K Hellcat, minutes after it went out of control”.

And second, the worst part was not being a runaway military drone accidentally flying towards Los Angeles, but rather how “twin Scorpion interceptors fired more than 200 missiles, missing their target each time”.

Note how detailed these stories are of American military planes firing rockets into civilian areas.

Edna Carlson was at home there with her 6-year-old son when shrapnel exploded through her front window, bounced off the ceiling, pierced a wall and landed in a cupboard.

More fragments passed through the home and garage of J. R. Hingle, barely missing a visitor sitting on his couch.

Larry Kempton was driving west on Palmdale Boulevard with his mother, Bernice, when a rocket hit the street in front of the car. Fragments splintered the windshield, blew out a tire and put holes in the radiator. Neither person was injured.

Historians point out a detail that the double whammy here is the *ROCKETS themselves were DRONES* “supposed to disarm themselves” and didn’t function intelligently as intended either.

In other words it’s understandable how some might want to forget that drone development in the 1940s ended with scorched earth, wildfires raging, firefighters scrambling and American civilians running for cover. 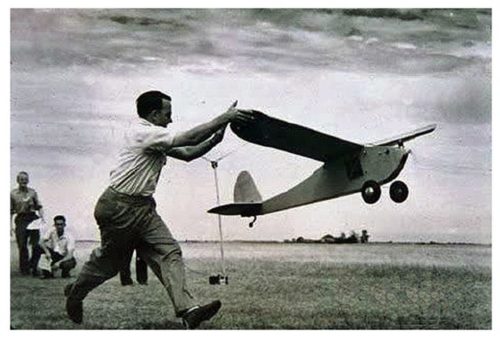 And then two decades later “208 Rockets Fired at Runaway Plane: Missiles Spray Southland Area in Effort to Halt Wild Drone”, which set the stage for public nervousness through the 1960s about automated missiles (Cuba Crisis) let alone surveillance drones and driverless cars… all a reality at that time. 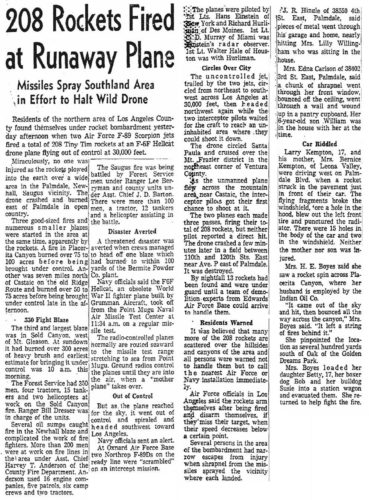