Even historians tend to overlook an important detail in American history: this country needs to restore monument honors to people who helped defeat domestic terrorism, because these national heroes have been under attack for at least 130 years.

One of John Oliver’s Last Week Tonight episodes has a humorous albeit sad explanation of the pro-slavery Americans who even to this day want to continue their “traditions” instead, which basically means openly denigrating American soldiers and leadership.

Just the fact that John Oliver has pulled the Southern Poverty Law Center (SPLC) into his story shows how mainstream condemnation of American enemy monuments has become, and deservedly. The SPLC has done an amazing job highlighting the falseness of “heritage” claims.

The Civil War ended 153 years ago. The Confederacy, as Mitch Landrieu said, was on the wrong side of humanity. Our public entities should no longer play a role in distorting history by honoring a secessionist government that waged war against the United States to preserve white supremacy and the enslavement of millions of people.

It’s past time for the South – and the rest of the nation – to bury the myth of the Lost Cause once and for all.

True. Bury the myth. It makes sense that pro-slavery white supremacist distortion of history must stop. That means America needs to stop giving honors to domestic terrorists who enslaved millions and murdered hundreds of thousands of Americans.

However, as I said I also believe there is an ingredient missing to the story. There may be no better example than Grant’s “Let Us Have Peace” Tomb.

The final resting place of President Ulysses S. Grant and his wife, Julia, is the largest mausoleum in North America. It testifies to a people’s gratitude for the man who ended the bloodiest conflict in American history as Commanding General of the Union Army and then, as President of the United States, strove to heal a nation after a civil war and make rights for all citizens a reality.

In case you don’t get the reference, “Let Us Have Peace” was the concluding line of Grant’s 1868 acceptance letter to become President of the US. It’s hovering impressively over the entrance to his Tomb. 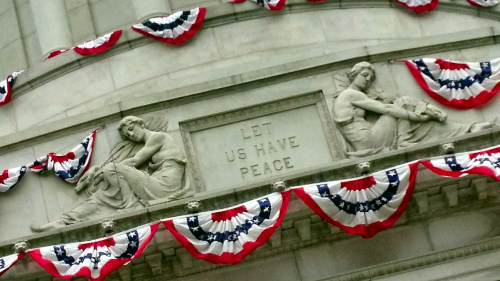 And in case you don’t remember that campaign phrase emphasizing peace and civility helped Grant win the Presidential contest by a landslide. At the polls he totally crushed Seymour’s appalling 1868 campaign motto: “This is a White Man’s Country. Let White Men Rule” 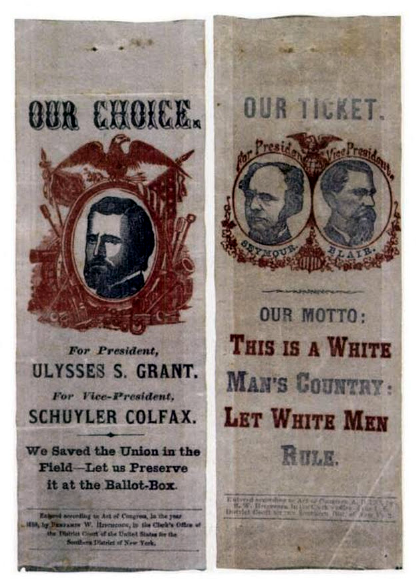 So, I think some perspective is needed here. This is a civil rights hero memorial. “Let Us Have Peace” is a huge engraving memorializing his dedication to human rights, bordered by larger-than-life statues, and I have zoomed in significantly in the above picture. It is hard to overstate the massively massive size of this monument to Grant’s civil rights legacy.

Here’s what it looks like when standing at the base of entrance steps.

So where is this gargantuan mausoleum, the largest tomb in North America, you ask?

Exactly. While Lincoln’s Memorial sees approximately 6 million people annually, guess how many visit Grant every year…. Nobody seems to know because who can even find it?

Pro tip: Grant’s Tomb sits in New York City overlooking the Hudson River. It is so large the Statue of Liberty can fit inside it. However few people if anyone around can tell you where it is. Ask any student of Columbia, present or past, to tell you where Grant’s Tomb is. They have no idea their school is only blocks away.

How is this possible? Why would a massive memorial to America’s best General and arguably top three best President (behind only Washington and Lincoln) in a huge city be so unknown?

The answer is simple: The Confederacy’s post-war anti-American “heritage” movement.

This is the other part of the idiotic revisionist movement that erected statues of that traitor Lee; they also worked to diminish Grant. Historians are only just beginning to talk about a concerted effort by white supremacists in America to intentionally obscure Grant and falsely tarnish his reputation.

When the great monument to Grant was erected, the design specified an empty space.

As you find with other monuments, it was meant to be set out overlooking a wide open expanse. Think of how the Lincoln memorial sits at the end of a giant reflecting pool. Grant’s Tomb had a similarly impressive hill-top setup as you can see in this photo from 1900. 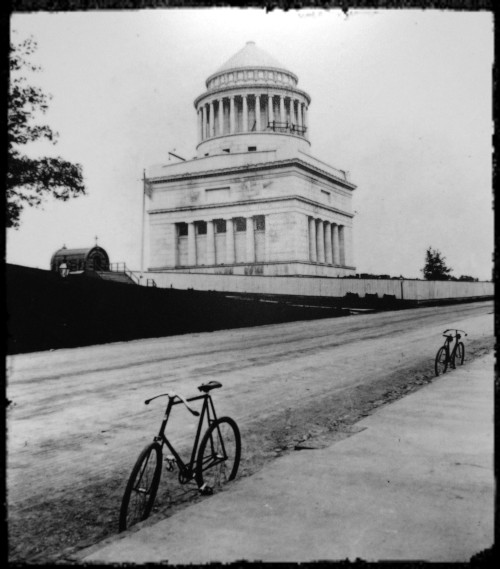 Apparently it could be seen for many miles around. And that was the point. Grant was one of the most popular men in the world when he died.

His funeral was legendary with over 1.5 million people honoring him in 1885. A seven mile long procession had 60K marching for five hours, where his pallbearers included the Confederate Generals he had defeated with unconditional surrender.

Years later when his tomb was completed, his amazing popularity continued.

Approximately 90,000 people from around the world donated over $600,000 towards the construction of Grant’s Tomb. This was the largest public fundraising effort ever at that time. Designed by architect John Duncan, the granite and marble structure was completed in 1897 and remains the largest mausoleum in North America. Over one million people attended the parade and dedication ceremony of Grant’s Tomb on April 27, 1897.

The largest public fundraising effort ever at that time!

Grant was seen as an international hero, globally respected as a supreme statesman, military genius and dedicated humanitarian. Think about those numbers. Millions of people in 1897 means basically the entire population of NYC went to his dedication ceremony.

For a sobering comparison, barely 100 people attended Lee’s funeral 30 years earlier. He died a traitor having never been pardoned for treason and never restoring his citizenship. Despite Civil War still being fresh in mind, so few honored Lee that local college students served as his pall bearers

That’s right. Lee tossed aside his American citizenship and apparently didn’t care much to push for it to be restored. He died a foreigner. Unbelievable that Americans erect statues and name streets and schools after him around the country. Who in Germany wants to buy a house on Hitler St or send their kids to General Rommel School?

If you’re wondering how it was possible for a map of the U.S. to show a school in California named after a pro-slavery General Lee…the school ended up wondering the same thing.

In the wake of the deadly Charleston, South Carolina church shooting of black congregation members last year, the Long Beach Unified School District (LBUSD) Board of Education created a committee tasked with recommending school names to replace that of Robert E. Lee Elementary School—named after Confederate war hero [sic] Robert E. Lee. The shooter’s proud display of the Confederate flag online only served to fuel a public outcry in the city.

If it were me I would have suggested renaming the school after U.S. war hero and President Grant, naturally. Alas instead the school went with a local hero who helped migrant farm workers: it’s now named Nieto Herrera.

Anyway back to the monumental issues with Grants Tomb. Around 1935, given the rise of fascism in the US as well as around the world, suddenly trees were planted surrounding Grant’s Tomb in direct contradiction of a design meant to maintain visual prominence.

And you can guess what happened next.

Imagine being the person who wants to plant trees up close and around the Statue of Liberty such that nobody would see it anymore unless standing at her feet. That’s what someone was trying to do to the largest mausoleum in America.

Such a plan should have been inconceivable, immediately cancelled as disrespectful, and yet…here is what Grant’s Tomb looks like today, completely hidden as if America is ashamed of its most important leader in military and civil rights history.

It doesn’t even have crosswalks or lights to allow pedestrians to reach it!

True story. Aside from one added to facilitate walking from the tomb to the gift shop, visitors have to violate a historically racist law to reach the island in a sea of asphalt (NYC Administrative Code Title 34, Section 4-04, Subsection (b) (2) No pedestrian shall cross any roadway at an intersection except within a cross-walk.) 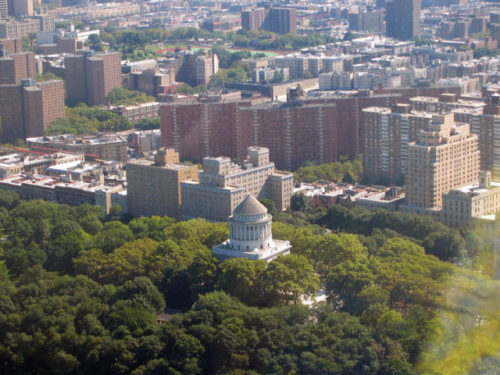 This monument to an American hero was greatly diminished around the same time as a “distorting history” crowd worked so hard to shamelessly erect statues to honor America’s enemies.

So the next time you see a loser-Lee monument of slavery and patronage, ask yourself where can you see the nearest monument to the victorious civil-rights anti-corruption champion Grant.

Now, to be fair to the people who were fiddling with history in the 1930s, they considered themselves reformers.

Herbert Satterlee is credited, for example, with pushing a number of dubious changes to Grant’s Tomb before committing suicide a few years later. 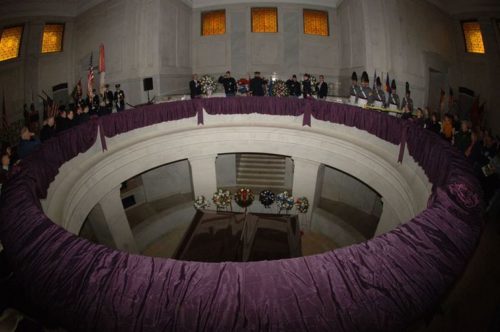 The Tiffany Company had donated purple glass in 1913. Then someone in 1939 decided they would give away Tiffany color works (nobody knows where the glass went, presumably to friends and family of those who replaced it?) and brought instead gloomy mismatched yellow glass.

Perhaps most notable, besides that inexcusable obfuscation line of trees, is a ring of military busts staring inward and distracting from the sarcophagi. 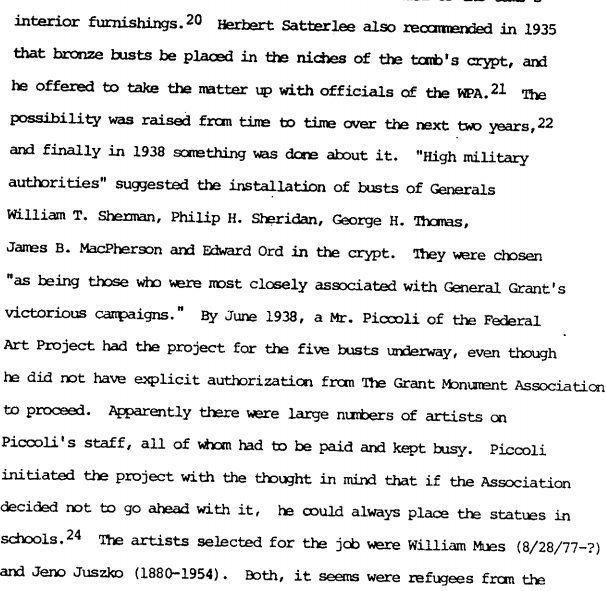 The busts perhaps were an attempt to emulate Les Invalides in Paris, built in 1861, where Napoleon rests in a massive quartzite sarcophagus surrounded by 12 female statues representing his military campaigns.

So here’s the thing. If we’re being charitable, a Napoleonic bust theme could mean the trees planted at the same time were meant to be tiny and manicured like Les Invalides. In some weird twist of history, people wanted Grant’s resting place to look more like Napoleon’s by adding trees and busts. 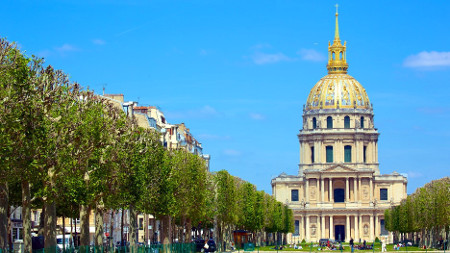 Instead we coincidentally see that during the period that unjust historians were trying to tarnish Grant’s civil rights legacy, and falsely color his war-time accomplishments, trees strangely were allowed to grow out-of-control into a thick curtain.

Is it really coincidence, though, even if the trees were meant to be maintained low and manicured to emulate Napoleon’s tomb? Grant absolutely hated the Napoleon family legacy of cruel and selfish behavior, as he wrote plainly for everyone to see. 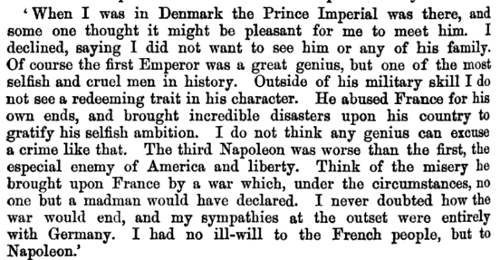 Grant even famously urged invasion of Mexico at the end of the Civil War and said “You see Napoleon in Mexico was really a part, and and active part, of the rebellion. His army was as much opposed to us as that of [pro-slavery General] Kirby Smith…I was for fighting Napoleon. There never was a more just cause for war than what Napoleon gave us.”

Even more to the point, the 1938 “renovations” to Grant’s tomb played up his military career and all but diminished civil rights legacy. Yet Grant thought when US Generals he knew emulated Napoleon they became examples of failure.

In other words, it’s a travesty of history for someone in 1938 to try and redesign Grant’s tomb to emulate Napoleon, a man and legacy he despised. It is even worse that someone in 1938 would plant the seeds of trees that, in direct opposition to the design of Grant’s tomb to be observed from far away, make it nearly impossible to see a building that so many people around the world have invested in to honor a great American hero.

Do we need to start a campaign? Let’s bring down those trees to a reasonable size. Nobody wanted to do a TV show about Grant because he was a normal modest american guy who did genuinely great things, no drama. He deserves better than to be ignored.