It now quite clearly has become a badge of honor for national heroes to distance themselves from the US regime leader:

Former CIA director John Brennan, whose security clearance you revoked on Wednesday, is one of the finest public servants I have ever known. Few Americans have done more to protect this country than John. He is a man of unparalleled integrity, whose honesty and character have never been in question, except by those who don’t know him.

I would consider it an honor if you would revoke my security clearance as well, so I can add my name to the list of men and women who have spoken up against your presidency

Those are the very choice words by the famous William H. McRaven, retired Navy admiral, commander of US JSOC from 2011-2014 including the 2011 raid in Pakistan that killed al-Qaeda leader Osama bin Laden

I am reminded, of course, of General Beck’s lament in 1938, which history warns us was done far too late and far too dependently on foreign intervention (Beck estimated Chamberlain’s cautious approach was evidence domestic German resistance could not count on UK support): 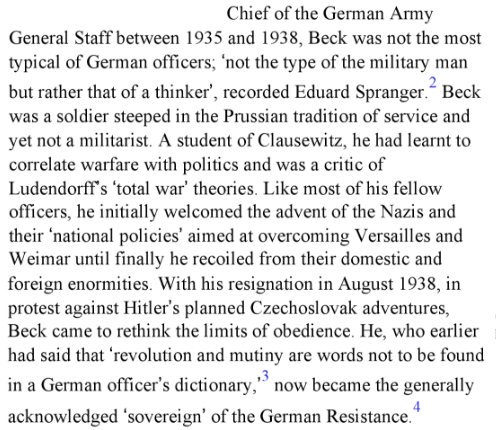 Also I have been told these “More Becks” beer ads in Germany in the decades after WWII were no coincidence:

Update and analysis August 27 by War on the Rocks: “MCRAVEN’S MESSAGE, LEADERSHIP, AND THE PROFESSION OF ARMS“