The hits keep coming against Facebook’s CSO, as details of his breaches expand dramatically. Here’s the screenshot forwarded to me by a concerned reader:

Apparently two weeks passed with fiddles playing while the vulnerability languished. This hints at an organization awash in staff and money unable to execute on safety. One could say it is the legacy of one man, Alex Stamos.

I’ve written about this quite a bit and maybe here I should add that this really is about managing security mindset at the top of the pyramid.

Mark Zuckerberg built not just a business, but a company culture with the fervor of a messianic sect

When the messiah doesn’t make customer privacy a priority, a CSO is collecting paychecks and getting rich while people suffer. It is like being a doctor for a cult leader who runs a hospital and doesn’t believe in soap, so you sit there watching germs spread among those you provide “care”, killing women who give birth.

That seems worse than just being bad at the job, because it implies knowing things aren’t getting any better yet staying on claiming things are fine, just fine.

So what comes next? Show me a cult leader who was able to recognize an external authority, and we might have clues to the answer.

Many people may have speculated that CEO of Facebook was traveling around meeting people in order to run for some political office. This overlooks the fact that he has no interest in quaint concepts of democracy or election. Do you see anything democratic in a Facebook management organization when black hires sit at zero percent?

Zuckerberg profits from a cult-like obsession with knowing everything about his followers in order to get their likes. He apparently sees little or no value in protecting his followers from harm. In reality he has been researching how his confession-like service would be modified to increase his control over users:

Christian publications interpreted Zuckerberg’s remarks in different ways; some said he was suggesting the social network should draw inspiration from the church, while others fretted he was envisioning a future where Facebook replaces the church. […]

“As I’ve traveled around and learned about different places, one theme is clear: Every great community has great leaders,” he said.

“Think about it. A church doesn’t just come together. It has a pastor who cares for the well-being of their congregation, makes sure they have food and shelter.”

Food and shelter. Is there a pastor who cares for privacy?

And so it came to pass that in every town where the CEO of Facebook visited, he went inside their religious centers looking for ways to convert followers of others to his own sect.

These are not the actions of a man who is thinking about things like granting privacy to people. Safety of his flock in terms of privacy remains an open question, but at least the ruse of security was forced out by regulators. 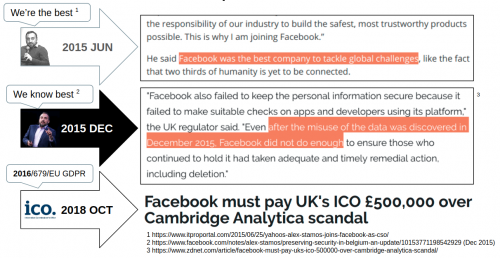