There’s something not quite right about a BBC article about the death of Fernando Corbató.

First, the meat of the story describes sharing models of compute.

Using computers during the 50s was an exercise in frustration because the huge, monolithic machines could only handle one processing job at a time.

In a bid to overcome this limitation, Dr Corbato developed an operating system for computers called the Compatible Time-Sharing System (CTSS).

Rather than have the machine dedicated to one person, CTSS divided up the processing power of a computer into small slices so it could do little bits of work for lots of people.

Given all that…the BBC decided to run their story with a title of “Computer password inventor dies aged 93”.

A lot of people think of the late Corbato this way, yet I’m not sure why that’s a good idea to keep saying it. The BBC could do better.

We are in an age where sharing systems are wildly popular and everyone hates passwords. Perhaps people think focusing on the password story will get more clicks? I don’t like how it distracts from the bigger picture.

It’s a bit like calling the guy who invented police (another sharing system) the inventor of the nightstick. Why focus on the latter when the former was their actual intent and more notable contribution? Even if there were other sharing systems around that time, Corbato’s sharing system work was seminal and very influential.

Second, the BBC describes antique compute power as “so fast”.

Even in the 50s and 60s computers were so fast that no user noticed they were only getting a small portion of a machine’s processing power at any one time.

WE have both “an exercise in frustration” because jobs had to be stacked, and yet at the same time “no user noticed they were only getting a small portion”. I find it hard to reconcile how frustration drove a user to solve something that no user noticed. Was it frustrating or was it invisible?

Also the story at this point ignores the development of batch processing in the late 1950s.

In the spring of 1962, Scherr was looking for a way to bump up his usage time on CTSS. He had been allotted four hours per week, but it wasn’t nearly enough time to run the detailed performance simulations he’d designed for the new computer system. So he simply printed out all of the passwords stored on the system.

And finally, third, this whole narrative misses the point that Dr Corbato himself describes the use of a secret to gain entry as an obvious solution for shared systems.

He was reluctant to take credit for passwords, which begs the question why people are so intent on sticking it to him, instead of credit for a compute sharing model that can uniquely authenticate people.

I’ve seen some people reference IBM in the 1950s, when really there should be an investigation into Philco, RCA, ERA, NCR, GM NAA, Tymshare, National CSS, Dial Data and Fairchild computers from that time.

Many computer systems under development in the late 1950s were serving the US military. So by way of example, here is a page from a 1956 US Army FM26-5 booklet on the language used to handle access to an “internal” shared resource: 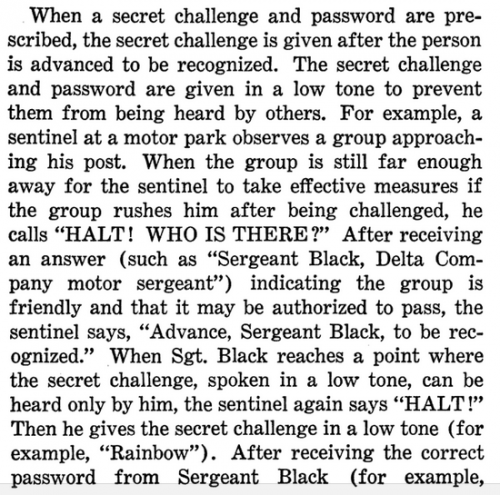