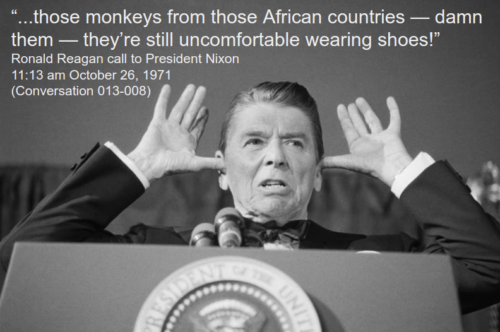 It’s been interesting to read growing confirmations that Reagan was obviously a racist exaggerator and intentionally harmed Americans who did not have white skin.

One of the best explanations I’ve seen so far is how latent racism in Reagan’s campaigns elevated his popularity, while his opponents actually suffered when they tried to call it out without directly addressing Reagan as a racist.

Josh Levin writes about Carter being attacked for opposing racism, and also how Reagan escaped any condemnations at the same time.

“You’ve seen in this campaign the stirrings of hate and the rebirth of code words like states’ rights in a speech in Mississippi,” Carter said, adding that “hatred has no place in this country.”

You would think this would have elevated Carter for being against racism in America. Instead apparently he had to go on the defensive of such a position, even denying calling the racist Reagan a racist.

While Carter was chastened, Reagan did nothing to modify his behavior. Just before Election Day, the Republican candidate appeared at a rally with former Mississippi Gov. John Bell Williams, an avowed segregationist. South Carolina Sen. Strom Thurmond, meanwhile, told a crowd of Reagan supporters, “We want that federal government to keep their filthy hands off the rights of the states.” Reagan would be rewarded for the company he kept. He’d beat Carter by 10 points, winning every Southern state except West Virginia and Georgia.

I believe this has been called something like the racists hate being called racist because they are racist. Carter should have just called Reagan racist and it’s a shame Carter lost trying to be diplomatic and fair (pun not intended) given how right he was.

It reminds me of the smooth language MLK used 9 October 1964 talking about Barry Goldwater’s run for President, which of course made MLK very unpopular at that time:

The principles of states’ rights advocated by Mr. Goldwater diminish us and would deny to Negro and white alike, many of the privileges and opportunities of living in American society.

MLK was absolutely right and Goldwater regularly engaged in racism using encoded signaling just like Reagan would do later, as reported even in Goldwater’s time:

…the Goldwater movement, whether or not it can command a majority, remains an enormous one in the South and appears to be a racist movement and almost nothing else. …Goldwater seemed fully aware of this and not visibly distressed by it. He did not, to be sure, make any direct racist appeals. He covered the South and never, in any public gathering, mentioned ‘race’ or ‘Negroes’ or ‘whites’ or ‘segregation’ or ‘civil rights.’ … He talked about those realities all the time, in an underground, or Aesopian, language—a kind of code that few in his audiences had any trouble deciphering. In the code, ‘bullies and marauders’ means ‘Negroes.’ ‘Criminal defendants” means negroes. States rights means ‘opposition to civil rights.’ ‘Women’ means ‘white women.’

MLK was assassinated in 1968. Goldwater continued being racist another three decades, expanding extremism and racism like his biggest fan Senator Thurmond, and died of natural causes in 1998:

…credited as a founder of the modern conservative movement and with contributing to Ronald Reagan’s [racist platform essential to his] rise to prominence and the presidency.

Goldwater’s failure, despite his “Aesopian” language, was taken by the GOP to be a result of his racism being too overt. This led to further encoding techniques by the time Reagan and Bush ran their campaigns.

Republican strategist Lee Atwater, who ensured George H.W. Bush’s 1988 presidential race’s success considerably by appealing to racism, explained that overtly appealing to racism backfired by the mid-1960s, “[s]o you say stuff like forced busing, states’ rights, and all that stuff. You’re getting so abstract now [that] you’re talking about cutting taxes, and all these things you’re talking about are totally economic things and a byproduct of them is [that] blacks get hurt worse than whites.”

Back to Levin’s points about Reagan (similar to the present occupant in the Whitehouse), he was exceptional in that his racism gave Nixon’s racism the appearance of being less extreme, which is no small feat.

I thought of the Neshoba County Fair and its aftermath this week when the Atlantic published a previously unknown snippet of a conversation between Reagan and President Richard Nixon. On the morning of Oct. 26, 1971, Reagan, who was then the governor of California, told Nixon that African nations were to blame for the United Nations’ vote to eject Taiwan and welcome in mainland China. “Last night, I tell you, to watch that thing on television as I did,” Reagan said in audio captured by Nixon’s White House taping system, “to see those, those monkeys from those African countries—damn them, they’re still uncomfortable wearing shoes!” Nixon cackled in response. A few minutes later, the president called Secretary of State William Rogers to report, in the words of the Atlantic’s Timothy Naftali, “that Reagan spoke for racist Americans, and they needed to be listened to.”

On that tape, Reagan’s racism is direct and undeniable. Nixon, whose own racism is extraordinarily well-documented, immediately rejoices in it, laughing as Reagan talks about African “monkeys.” In his call with Rogers, by contrast, Nixon distances himself from the racist commentary, attributing it to someone more prejudiced than he is. (He also tells Rogers, erroneously, that Reagan had called the African leaders “cannibals.”) At the same time, Nixon categorizes Reagan’s views as a valuable political data point, a sentiment that needs to be understood and nurtured, not rejected.

Doug Rossinow, professor of history at Metropolitan State University in St. Paul, Minnesota, and author of “The Reagan Era: A History of the 1980s” puts it like this in his 2015 article called “…Face the Fact that Reagan Was Hostile to Civil Rights”:

Reagan rode the white backlash—along with other major issues, to be sure—farther than anyone else ever did in American history, before or since. It is long since time that historians of Reagan, Reaganism, and the 1980s overcame their reluctance to tell this basic part of that era’s history plainly.

And then a commenter on Rossinow’s article sums it all up for us:

In today’s terms, this analysis is not only historically interesting, it also impacts our debate about the safety of artificial intelligence. When machines use only straight reasoning, devoid of translation for Reagan’s true signaling and racism, they accelerate harms from encoded hate in the GOP. 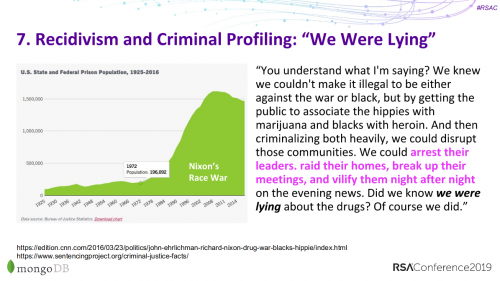 In other words, admitting Reagan was racist is good food for thought both in terms of political history as well as big tech.

The “huge amount of dog-whistle racism that came from Reagan’s own lips,” [Matt Tyrnauer, director of Showtime’s The Reagans] says, “was under-reported in the time and has been virtually erased from the popular imagination.”

This deniability “becomes an essential part of dog whistling,” Berkeley Law professor and author Ian Haney López, who’s interviewed in The Reagans, tells Esquire. “It simultaneously involves appeals designed to trigger racist fears and also the denial that the person is doing any such thing.”

The list of Reagan’s under-recognized racism is a long one.

And yet somehow Americans “learned” sayings like “Shining City on a Hill” were meant to represent everyone despite all signs pointing to the kind of racism that would exclude non-white Americans from that city.