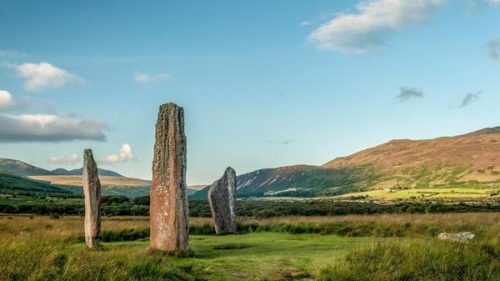 Archaeologists are only a few steps removed from forensic scientists looking for crime scenes, if you know what I mean.

Rewriting history now is even easier than ever because drones can speed the discovery of buried things:

…airborne laser scan of the area has found 900 previously unknown archaeological sites on Arran, promising to rewrite the 6,000-year human history of the island…

Given how much can be revealed and how fast, the next technology shift may have to be artificially intelligent archaeologists that can keep up with laser workloads:

Francisco Estrada-Belli, another member of the archaeological team, told National Geographic: “The fortified structures and large causeways reveal modifications to the natural landscape made by the Maya on a previously unimaginable scale.

“We’ll need 100 years to go through all the data and really understand what we’re seeing.”

One group that isn’t waiting any time to jump (pun not intended) to conclusions are the operators on military missions.

The operators use a tablet and special software to designate an area of interest, dispatch a drone to scan it, and then – in a matter of hours – automatically compile the sensor readings into a 3D map so detailed you can even distinguish different species of trees.

I guess you could say operators are seeking places to hide that others could use as much as themselves.

The next step from 3D maps is to attach photo-realistic data. Nearly five years ago AutoDesk boasted of their ability to 3D map anything on their cloud using drone photography. Earlier this year Here engineers said pushing photographic-level details to operators at city-wide scale is hitting performance bottlenecks, yet already is being done.

This opens up huge new ethical issues, including adversarial response and countermeasures to seeing and being seen, as the geospatial experts in the defense industry already have been flagging:

Efforts to correct mistakes, respond to disasters, or map poverty warm the heart. But other aspects of geospatial intelligence are rife with ethical challenges, from potential invasions of privacy to the violation of the confidentiality of individuals who agree to provide income or other demographic information. “Don’t expect lawyers to catch up,” warned Schwartz. “There are going to be guidelines that need to be created by those who are doing the work.”

“The reason we exist is to give advantage to our country,” said Munsell, “and as director [Robert] Cardillo used to say, ‘to never allow a fair fight.’”