After a series of tragic missteps by the White House, which led to tens of thousands of Kurds being killed and hundreds of thousands of refugees, American officials tried to claim they had created a cease-fire.

On the face of it their claim doesn’t make any sense, as America turned tail and abruptly left its allies. A cease-fire would be with whom? Can’t say the Kurds or that would mean Turkey is formally acknowledging a Kurdish authority.

The U.S. departure from its position was so sudden, it had to fly in jets to bomb its own supply depots and structures instead of following normal exit procedures. Russians were said to be within hours inhabiting military structures built by Americans.

Russians have fun exploring the hastily abandoned American military base in Syria: “Yesterday it was them and today it is us here. Let’s see how they lived and what they ate.”

The American story-line attempted to say in this context of running away that a cease-fire was negotiated. It gives the impression of Turkey recognizing an authority.

However Turkey officially has said the opposite, as The Economist correspondent in Turkey tweeted:

Turkish FM Çavuşoğlu just now: “We will suspend the Peace Spring operation for 120 hours for the PKK/YPG to withdraw. This is not a ceasefire.”

The joint Turkish-US statement confirms this, calling it a unilateral pause for a Turkish operation. 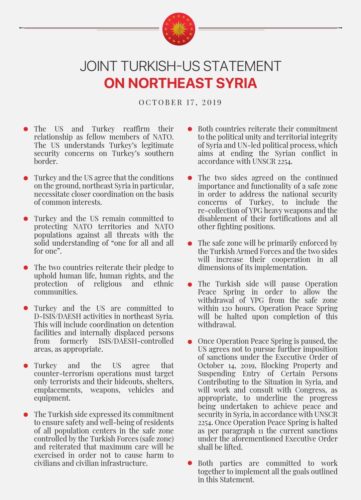