As you maybe read here before when I joked about the fantasy crime called “jaywalking”, or wrote about cultural disparities in road safety, crosswalks are an unfair conspiracy by American car manufacturers that removed non-motorized forms of transportation (including pedestrians and especially women on bicycles) from the road.

Creating crosswalks and enforcing them has been by their nature extremely political acts.

They transfer a huge amount of power to car manufacturers, their car owners, and away from everyone else. The following paragraph from a 2019 paper that suggests the “street view” of your house predicts your chance of dying should surprise nobody:

It turns out that the car you drive is a surprisingly reliable proxy for your income level, your education, your occupation, and even the way you vote in elections.

Using cars as a proxy for power (enabling privilege and holding down the poor) is an inversion of what was supposed to happen with “freedom” of movement in America.

If you read the history of stop-lights in 1860s London, for example, a red light and an arm lowered to inform cars to stop being a threat. That’s right, stop-lights were initially designed (just thirty years after the concept of police were invented by Robert Peel) to allow pedestrians to move about freely. Somehow that concept was completely flipped to where pedestrians were pushed into a box (and harassed by police).

Consider how a lack of crosswalk, “ridiculously missing” as some would say, even has been linked to intentional unequal treatment of city residents.

Police detaining and questioning people for not using crosswalks (see points above) repeatedly has proven to be racist, to top it all off.

In brief, if you see a lot of cars on roads and few bicycles, check your value system for being anti-American, let alone anti-humanitarian.

Car manufacturers conspired through crosswalk lobbying to shift all rights away from residents in order to force expensive cars to be purchased for “freedom” to move about safely.

This devious plot runs so thick, Uber allegedly emphasized to its drivers that it would be better to sit in crosswalks to pick up passengers. The logic is they don’t care about blocking pedestrians, but do care about blocking other cars (note some US states also have laws encouraging this anti-pedestrian move).

Also worth noting is the flagship propaganda from Tesla this year has been bulletproof oversized trucks better suited for war zones where freedoms are missing than the public spaces of streets originally encouraging freedom of human movement and play.

Given the American context of turning streets into corporate-controlled death zones, the problem has been bleeding into Canada’s famous culture of “niceness”.

Thus Quebec has posted a video of crosswalks attempting to physically stop cars by telling them to be more polite to others:

It begs the question what damage or fine would be for running over the pop-ups, as they don’t seem to be designed (aside from the surprise) in a way that cars incur cost for disobeying them.

It also reminds me of the Ukrainian art experiment in 2011 (regularly featured in my talks as an example test for driverless car engineering) that popped up human-shaped balloons in crosswalks to stop speeding cars (triggered by a radar gun). 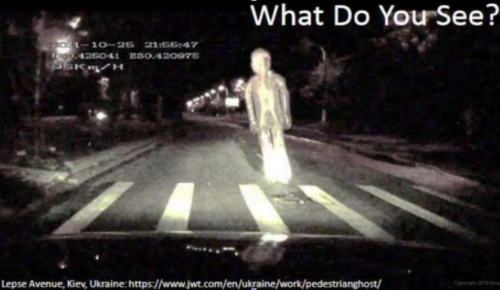 What if these pop-ups in Quebec were shaped like humans instead of just rectangles? That would be an even greater surprise with more psychological deterrence.

I like that the pop-ups are a throw back to the original concept for 1866 traffic stop lights of London, England. 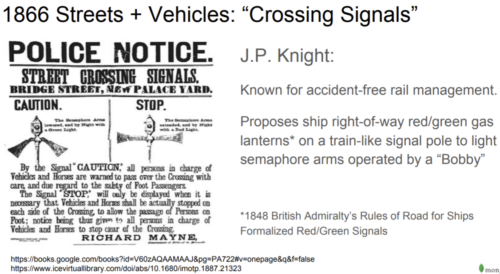 However it seems the Quebec design is more of an art experiment for shock/suggestion and education than a real safety control, and on that note the pop-ups could be a lot more creative and shocking.

I mean if you’re going to pop-up a bunch of columns, how about make the columns rise and to a scale that represents the increasing death rate of pedestrians year-over-year from cars? Then stick a “stop killing our kids” message on that barrier…as Small Wars Journal has illustrated: