…[He is as or more] concerned about the political fallout of the growing number of coronavirus cases in the United States as he is about how those cases should be handled. […] {His] concern is just that numeric increase, a concern that has no other apparent root besides his insistence that his administration is keeping that particular number low.

Sounds like an obsession with appearance, and no concern for people who will die. In other words it suggests numbers everywhere are being cooked by this administration because they love power, hate science and believe gambling with other peoples’ lives has no consequences.

Some also are reporting that warnings by intelligence professionals to the White House of the pandemic risk to America… were ignored and the office leadership fired.

Stanford lecturer Brett McGurk cited a document from the office the Director of National Intelligence Dan Coats’ 2019 “Worldwide Threat Assessment,” which specifically warns of a disease like the coronavirus.

Low numbers of cases doesn’t even mean things will be better for those reporting them, since they sit on an exponential curve early in the spread cycles. Here you can see Michael Lines graphing the similarity in rates:

“Data is beautiful” on reddit offers this graph, which indicates the US being slow on response and failing to test means it is ramping quicker than countries that tested early and often:

Any country having only 50 cases on the same day that Korea has 5,000, for example, could indicate Korea is 15 days ahead on a single contagion timeline. They’re linear numbers following the same line not running in parallel. 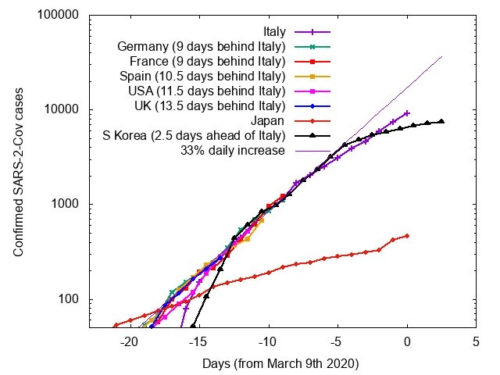 WHO has stated these three factors are most important to containment:

So the real questions right now are what testing capability has America demonstrated relative to number of cases it has reported on the shared timeline (sufficiency), and how early did the testing start relative to the case numbers (enabling isolation and treatment during spread to contacts).

The answers are that America’s federal government not only is intentionally cooking its numbers to artificially keep numbers reported low, it’s also been dangerously slow to deploy test kits that would be able to prevent thousands of deaths in America.

…the country’s true capacity for testing has not been made clear to its residents. This level of obfuscation is unexpected in the United States, which has long been a global leader in public-health transparency. The figures we gathered suggest that the American response to the coronavirus and the disease it causes, COVID-19, has been shockingly sluggish, especially compared with that of other developed countries. The CDC confirmed eight days ago that the virus was in community transmission in the United States—that it was infecting Americans who had neither traveled abroad nor were in contact with others who had. In South Korea, more than 66,650 people were tested within a week of its first case of community transmission, and it quickly became able to test 10,000 people a day. The United Kingdom, which has only 115 positive cases, has so far tested 18,083 people for the virus.

That’s a disaster, and it seems to be an intentional one. The US government is likely to get a lot of Americans killed. Already confirmed cases have exploded after the White House literally said (not a joke) that we should expect cases soon to go to zero.

Appointing Pence, who infamously bungled his state’s AIDS crisis, is only going to make the numbers games worse (like most White House appointments so far, including the newly appointed CDC head infamous for believing a virus is God’s punishment).

In Seattle, a hot spot of the virus where a dozen people already have died, only about 100 tests were done across an area with greater than 3 million people.

It’s truly bizarre to run America completely blind like this, unless you think back to how badly President Reagan infamously intentionally delayed and suppressed national virus numbers and response while thousands were dying.

To be clear, scientists today refer to the COVID-19 a cross between AIDS and SARS. That makes it especially important to reflect on an American President in the 1980s who intentionally hamstrung the CDC and blocked scientific response to AIDS.

I’ve written about this before, in context of the “executive privilege” stain from anti-science extremists in American politics (including present Supreme Court Justice Roberts, adviser to Reagan during the AIDS crisis):

One of the most prominent stains on the…Reagan administration was its response, or lack of response, to the AIDS crisis as it began to ravage American cities in the early and mid-1980s. President Reagan famously…didn’t himself publicly mention AIDS until [Sept 17th] 1985, when more than 5,000 people, most of them gay men, had already been killed by the disease.

Reagan’s first public address on the subject came even later, captured in a story about the White House turning down pleas for help from political backers with the virus.

President Reagan did not give his first major public address on the disease until …May 31, 1987 — well after the number of AIDS deaths in the United States topped 25,000.

Italy, with its high fatality numbers serves for most countries as a foreshadowing of what’s to come with COVID-19. That country is now predicting 18,000 people hospitalized in Lombardy region in a few weeks, of which they expect 3,000 will require intensive care (that’s 10 times Italy’s current capacity).

However, Ronald Reagan and Justice Roberts perhaps are an even better foreshadowing of what’s to come with COVID-19 in terms of America’s lack of transparency and overly political approach to healthcare, downplaying fatalities or even ignoring them altogether.

In the early stages of the AIDS virus thousands were dead and yet the Reagan Administration sat opaquely disbelieving, refusing to give scientists a voice and devaluing American lives. Cooking the numbers during that crisis quickly resulted in high fatality rates into the tens of thousands, with nearly 700,000 Americans in total killed since the virus was first reported.

Watch this video on The Scene.

A modern element of this can be found in the ugly section following the “At Harvard forum, three who know warn of ‘most daunting virus’ in half a century” story, where you will find comments like…

And as Sue Turner has pointed out, here’s how the UK government used its office of information in 1987 to counteract these kinds of ignorant and harmful comments.