There’s a line “do not obey” within the famous Curtis Mayfield song “Move On Up” (from his 1970 debut album Curtis).

To start, let’s look all the way back at Woodrow Wilson’s racist “America First” campaign of 1916, which manifested in years of organized white mobs committing widespread violence and terrorizing black neighborhoods. 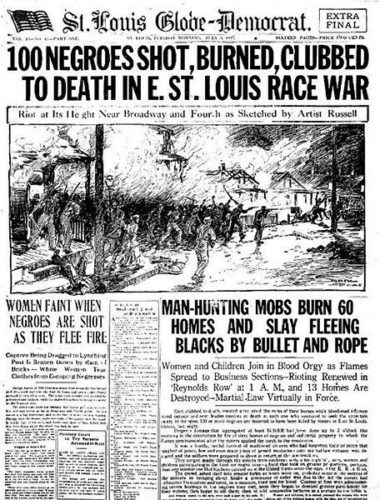 Historians, for example, might point to the NYC 1917 Silent Parade meant to protest the fact that in America “black skin was death warrant”, or the Chicago 1919 massacre that was part of a “Red Summer” of white supremacist terrorist acts.

This frightful condition continued such that by 1921 all of Tulsa’s black neighborhoods and “Wall Street” were burned to the ground by planes dropping napalm.

I could see planes circling in mid-air. They grew in number and hummed, darted and dipped low. I could hear something like hail falling upon the top of my office building. Down East Archer, I saw the old Mid-Way hotel on fire, burning from its top, and then another and another and another building began to burn from their top…

The side-walks were literally covered with burning turpentine balls. I knew all too well where they came from, and I knew all too well why every burning building first caught from the top… ‘Where oh where is our splendid fire department with its half dozen stations?’ I asked myself. ‘Is the city in conspiracy with the mob?’

Even a “white Tulsan perspective” published in 1921 admitted “lack of law enforcement was in no small part a contributing factor” to death and destruction from domestic terrorist groups attacking Americans.

White violence mobs facilitated by law enforcement literally pushed Americans into forced labor and mass graves, followed with construction of a KKK convention hall on top of cities ruined by white violence (an early form of racist “urban renewal” politics made famous by Nixon, although he more subtlety used dynamite and bulldozers instead of napalm and planes)… 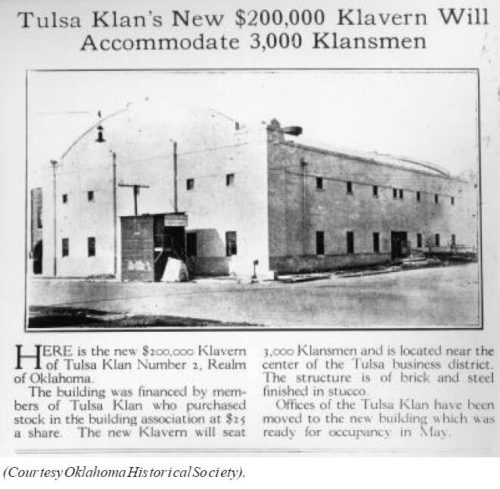 A news story written in 1921 clearly called out “old white group control” as a form of American tyranny:

One of the charges made against the colored men in Tulsa is that they were “radical.” Questioning the whites more closely regarding the nature of this radicalism, I found it means that Negroes were uncompromisingly denouncing “Jim-Crow” cars, lynching, peonage; in short, were asking that the Federal constitutional guaranties of “life, liberty, and the pursuit of happiness” be given regardless of color. The Negroes of Tulsa and other Oklahoma cities are pioneers; men and women who have dared, men and women who have had the initiative and the courage to pull up stakes in other less-favored States and face hardship in a newer one for the sake of eventual progress. That type is ever less ready to submit to insult. Those of the whites who seek to maintain the old white group control naturally do not relish seeing Negroes emancipating themselves from the old system.

All of this, the fact that America continued to systemically deny freedom and liberty based solely on race throughout the 1900s, still is rarely if ever taught in American schools.

Blocked from upward mobility by state-sanctioned violent white supremacist mobs — meaning police offered the opposite of help to Americans under attack — you perhaps can see exactly why black community protection groups emerged.

In other words, ethnic-based “gangs” were started as a way to enable the kind of peace needed to prosper, by defending American communities against organized white supremacist domestic terrorism.

Although some black gangs likely formed to counter the aggressive white youth, the unorganized black youth were no match for the well-organized, all-white gangs that were centered in their athletic clubs.

Wherever white oppression tactics were found, and police failed in their duties, a gang was likely formed to defend against injustices and thus enable a degree of protection to help enable gains in health, wealth and prosperity.

Catholic (Polish, Irish, German, Italian), Chinese, Jewish and black gangs all were established to protect against American domestic terrorism. These ethnic gangs also fundamentally depended on fund-raising and community support events. It is a fine line obviously between donations and extractions/taxation, given a lack of transparency or legal representation possible in gang systems.

A story from Milwaukee, for example, involves a fund-raising event on a huge boat in Lake Michigan. A violent storm caused a collision that sank the boat and decimated that community by drowning the “Irish Union Guard” abolitionist militia leadership. So many leaders of that one community died in just one fund-raising tragedy, it has been said the entire balance of Milwaukee’s political power abruptly shifted on that day towards German militia running the city.

Another story, this time from Minneapolis, is how Jewish gangsters violently attacked any German “Silver Shirt” militia (Nazi) rally, calling it a “patriotic duty as Americans” to shut-down pro-Hitler influence operations.

Berman learned that Silver Shirts were mounting a rally at a nearby Elks’ Lodge. When the Nazi leader called for all the “Jew bastards” in the city to be expelled, or worse, Berman and his associates burst in to the room and started cracking heads. After ten minutes, they had emptied the hall. His suit covered in blood, Berman took the microphone and announced, “This is a warning. Anybody who says anything against Jews gets the same treatment. Only next time it will be worse.” After Berman broke up two more rallies, there were no more public Silver Shirt meetings in Minneapolis.

Totally defeated on the streets the Silver Shirt members then became the Minneapolis Police Department (MPD) to gain an unfair advantage over their targets (the city in conspiracy with the mob), but that’s a blog post for another day.

Gangs typically dissipated as they become assimilated by mainstream opportunities (upward mobility) in America (even a catholic has been elected President). However America has such high levels of continued oppression of blacks (1950s White House urban renewal was encoded race warfare) it is no wonder black gangs have lingered.

See the film “Rubble Kings” for an excellent look at the socio-economics of how and why New York gangs were formed in the 1960s and what helped them dissipate in the Bronx. Hint: upward mobility through opportunities in music and art — foundations of today’s rap and hip-hop markets.

With that in mind, let’s look at what Mayfield may have been writing about in his lyrics. The year was 1970 when he released his debut album Curtis, and also when one of the Chicago gangs (Blackstone Rangers) tried to pressure Mayfield to fund them.

He did not obey. Instead he offered them a concert and used his platform to drive a “move on up” message.

He was pushing hope for equality and justice of assimilation that other the races in America were allowed to achieve, leaving behind the need for paying for gang protection from the systemic violence of white power groups.

The Atlantic has described the situation as…

…no other society in human history has imprisoned so many of its own citizens.

To make an even finer point on the social power of this song, by 1975 a popular TV show about black “nouveau-riche” prosperity in America, called The Jeffersons, created a theme song called “Movin’ On Up“.

Now we’re up in the big leagues
Gettin’ our turn at bat
As long as we live
It’s you and me, baby
There ain’t nothin’ wrong with that

For further reading, consider how “up that hill” in The Jeffersons 1975 theme song is likely a reference to American intolerance — “shining city on a hill“.