The BBC has published a story of how Easter Island government officials invoked prohibition customs to control the pandemic in their country.

Thanks to both tapu and umanga, Easter Island has not only successfully warded off the coronavirus; it’s revived past practices in order to plot a more sustainable future.

Tapu is practiced in various forms across Polynesia, from New Zealand to Hawaii, and is believed to be the origin of the English word “taboo”, with British explorer James Cook first noting the concept on a visit to Tonga in 1777. While tapu is a divine mandate controlling a society’s access to certain people, places or things (with potentially dire consequences for those who transgressed in historical times), taboo is similarly used in English to describe practices that are either forbidden or restricted by social or religious customs.

The local description of the safety and security that can come from a taboo is very poetic.

What the pandemic did, [Mayor Pedro Edmunds Paoa] explained, was change the position of the mask from the eyes to the mouth.

“It shut our mouths, because we kept eating and consuming and searching for money and building and destroying the nature and our fragile culture, without seeing the jeopardy that we were putting ourselves in,” he said. “Now, our eyes are open, and we are more keen to promote sustainability in words, actions and plans than we ever were before.”

A common thread in education has been to point to Easter Island as a lesson in ecological collapse. If true, perhaps it would be wise to look towards them for insights in environmental and health policy.

However, history is not quite so obvious, and so it turns out there is an even better reason to learn from Easter Island. The latest research shows it was invasion by foreign threats that was the main calamity to their thriving civilization.

…disease and slavery, introduced by Europeans, are more to blame than ecocide and self-destruction.

One of the turning points in analysis, from internal collapse to external threats, was a realization that fragments of “weapons” were more like evidence of sophisticated peaceful agrarian tools.

“It’s assumed that [pieces of glass] are the WMDs that led to the collapse of people,” the study’s lead author, Carl Lipo, an anthropologist and director of Binghamton University’s environmental studies program, told the BBC. “And what we found was there was no evidence, in fact, to support that these were used in a systematic, lethal fashion, and that they’re best explained as cultivation tools and things used in daily household activities.”

The assumptions made by Europeans were ignorant, a bit like someone from Easter Island landing in France observing that everyone owns a shovel and assuming it means civil war.

Two parts of the big shift in analysis are related to some pretty simple, even common sense, threads.

First, the rounded and short glass tools called “mata’a” were nothing like the offensive long-pointy weapons found in other places around the world. Who innovates around a big spoon when they could have enhanced their knife designs? 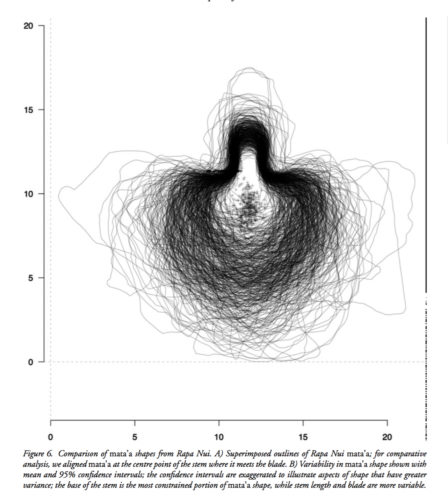 Ok I said spoon for a very specific reason. And now I have to take a second to discuss how disappointing it was to read that “researchers call them the ‘swiss army knives’ of stone tools”. I mean these same researchers are claiming tools were NOT primarily military issue while trying to describe them as ancient Swiss army knives?

SWISS ARMY KNIVES are standardized, military issue and pointy… it’s like the researchers couldn’t have possibly used a worse phrase to make their point (pun intended).

So while past lessons erroneously have suggested Easter Island is about environmental disaster from over-production, instead it serves as an example of collapse from disease-infested invasion.

It all registers as important food for thought about data integrity as they practice taboo to save their population from pandemic; show the world a “good model” of disease prevention as one of the most important forms of sustainability.

… why did the population shrink after the Europeans arrived in the eighteenth century? Lipo has a single, stark answer: “Disease that is introduced by Europeans after contact.” Smallpox and plague ripped through Easter Island, halving the population in a short time. […] The fate of the Rapa Nui on Easter Island is often used [falsely] to illustrate how humans destroy their communities with environmental destruction and warfare. But it might actually provide a good model for sustainable civilizations of the future.

Oh, and why did all the trees disappear? Rats, known also for spreading the plague, are blamed for Easter Island deforestation.

Almost all of the palm seed shells discovered on the island were found to have been gnawed by rats. Thousands of rat bones have been found, and crucially, much of the damage to forestry appears to have been done before evidence of fires on the island. […] Unchecked, a single mating pair can produce a population of nearly 17 million in just over three years…capable, on their own, of deforesting large lowland coastal areas in about 200 years or less. “In the absence of effective predators, rats alone could eventually result in deforestation.”

Once again, it seems prevention of invasive and uncontrolled threats is the Easter Island lesson for COVI19 and human sustainability.