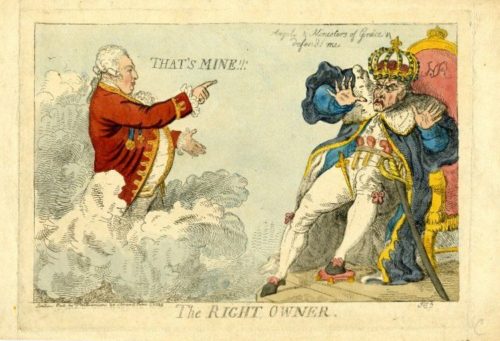 An historian writing for the British Library argues that Britain did not go through the same course of fundamental government upheaval as its neighbors in the 18th century because its social classes had methods and means for “dialogue” and political change.

A major question is why Britain did not experience a political revolution, similar to those which took place elsewhere in Europe. Rioting and protest against the Establishment was certainly serious in Britain in the late 1700s, but it never resulted in fundamental upheaval. An answer can perhaps be found in the fact that the relationships between different social classes were mainly stable. The working classes remained the backbone of the industrial revolution, and their rights and customs were usually recognised by those in power. By the 1790s many working-class protests were also channelled through more formal political organisations that proved highly effective in bringing about political change by peaceful means.

His point seems to be that while there were riots and violent clashes, and the majority of people couldn’t vote, they still could create influence and direct general political will through movements such as the anti-Catholic Gordon Riots and the much misunderstood Luddites.

However, he does allude also to the fact that threat of invasion by Napoleon was a factor in bringing Britain together in a shared fight.

A coalition formed with Europe against France for two decades with hundreds of thousands enlisted to fight, and prohibited from political expression… perhaps had more effect in keeping domestic relations pointed in a similar direction than saying the occasional riots and protests had peaceful resolutions.

The more modern take on this analysis comes from researchers in America claiming a “political stress indicator” (PSI) can predict revolution.

The social problems are the gasoline. [Russia’s puppet] is throwing matches.

[…] One key concern, according to Goldstone, is that people across the political spectrum have lost faith in government and political institutions. “In short, given the accumulated grievances, anger and distrust fanned for the last two decades, almost any election scenario this fall is likely to lead to popular protests on a scale we have not seen this century.

[…] But recent events, notably the [Russian puppet inspired] plot by a group of right-wing militants to kidnap and potentially kill the Democratic governor of Michigan, Gretchen Whitmer, over her policies to limit the spread of the coronavirus, have shocked even skeptics of the idea that the US is teetering on the brink of civil conflict. This is really concerning.

The PSI comments track somewhat to the historian of 18th century Britain. If there is no public faith in systems to foment political change, even without the ability or right to vote, then fundamental upheaval is more likely.

A better way perhaps of framing this for America is to say fundamental upheaval was during the Civil War and the current White House is being played by foreign adversaries to reopen those old wounds to keep them festering; loss of faith in government is a foreign plot, further inspiring domestic violent plots to assassinate democratic leaders as if it were still the 1850s.

Critics of the PSI point out that inequality may be high, which is a factor, yet America isn’t predominantly low-income at a level that would lead to widespread failure. In that sense preventing and delaying response to COVID-19 could be steered by foreign adversaries as a way to push America to being a low-income country and more likely to erupt into revolution.

Critics of the PSI also point out that revolutions come with some sudden rotation in control like natural resources being seized. This is interesting because when you look at the British examples the riots tended to be labor and technology related more than source/material.

America from that perspective tracks more closely to a discontent due to skilled labor displacement (machines doing work of unskilled staff) without having any centralized asset to be grabbed for violent power shift and foundation of new government. The funny thing about data/information being the current asset market is that, unlike things pulled out of the ground with intentional scarcity and centrality, information assets are easily shared, replaced and grown.

For another perspective, the American philosopher Richard Rorty wrote the following prediction about America in the 1998 New Statesman (Volume 127, Issues 4379-4391, Page 29)

Many writers on socioeconomic policy have warned that the old industrialized democracies are heading into a Weimar-like period, one in which populist movements are likely to overturn constitutional governments…Members of labor unions, and unorganized unskilled workers, will sooner or later realize that their government is not even trying to prevent wages from sinking or to prevent jobs from being exported. At that point, something will crack. The nonsuburban electorate will decide that the system has failed and start looking around for a strongman to vote for – someone willing to assure them that, once he is elected, the smug bureaucrats, tricky lawyers, overpaid bond salesmen, and postmodernist professors will no longer be calling the shots… One thing that is very likely to happen is that the gains made in the past forty years by black and brown Americans, and by homosexuals, will be wiped out. Jocular contempt for women will come back into fashion. The words ‘nigger’ and ‘kike’ will once again be heard in the workplace. All the sadism which the academy left has tried to make unacceptable to its students will come back. All the resentment which badly educated Americans feel about having their manners dictated to them by college graduates will find an outlet.

An American conflict analyst and journalist covering civil wars for three decades across Europe, Africa and the Middle East adds this perspective from her time in Bosnia:

What happened in Bosnia shows us how essential it is that we open up dialogue and encourage peaceful dissent — long before we get anywhere near the point of self-destruction.
Bosnia should be a lesson for us, a case study in how quickly things can unravel. If talks had been set up after the referendum, and if all sides sat down to hash out some kind of agreement, perhaps hundreds of thousands of lives might have been saved. There are dangerous preconditions for a conflagration, and we are showing some of them in America today: the erosion of our basic rights, the anger, and the tribal divisions.

In conclusion, out of all these I find the British historian gives us the most insights into the vulnerabilities as well as the solutions.

If foreign adversaries can continue to manipulate the White House and destroy confidence in American political systems (e.g rush Supreme Court nominations using highly partisan and unqualified candidates, replace career state positions with fealty and patronage placements), while increasing discontent over inequalities, then there’s a much higher chance of fundamental change in government along the lines of revolution.

However, if America bonds in resistance to a shared adversary (whether it be COVID19, climate change, Russia, China, etc.) political systems (even without voting) are far more likely to be swayed and changed due to riots and protests to express need for change rather than seize assets or upend and replace government.