In 2018 a very important and very large dry dock facility in Roslyakovo was in the news for a horrible tragedy.

There were about 60 people on the dock when it started to sink. Five of them did not manage to get in safety. One is reported dead and four injured, one with a serious condition.

This gave me a flash back to 1984 when Severomorsk, Russia hit the news for a horrible tragedy. A navy weapons depot caught fire and exploded, killing hundreds.

…the Central Intelligence Agency learned of the accident from travelers, then positioned satellites and electronic devices to assess the damage. Those sources said the death toll was estimated at between 200 and 300 people, many of them ordnance technicians sent into the fire caused by the explosion in a desperate by unsuccessful effort to defuse or disassemble the munitions before the exploded in a chain reaction over several hours. Officials at the State and Defense Departments, as well as diplomats and congressional officials all blamed the accident on Soviet “carelessness.”

There’s even a CIA file (with a copy of Jane’s Defense Weekly and details of a criminal trial for the Navy analyst who leaked the photos) for perspective:

…U.S. District Court Judge Josepth H. Young has already ruled that Morison’s motives were irrelevant, [Assistant U.S. Attorney] Schatzow voiced skepticism about the defense claims that Morison wanted to alert the American public through the medium of a British magazine where he was seeking a full-time job. “He didn’t send it to CBS,” Schatzow declared. “He didn’t send it to The Washington Post. He sent it to Jane’s.”

That Jane’s disclosure story from 1984 points out an ammunition dump also exploded in the Bobruysk airfield (Belarus), and at the end of the prior year ammunition exploded in the Dolon (Kazakhstan) airfield and two more ammunition depots exploded after that… by June there was a huge explosion in Schwerin. So the CIA file in fact shows Murmansk was the fifth or sixth Soviet safety disaster a row.

And that’s not to mention, or who can forget, the April 26, 1986 disaster at the Chernobyl nuclear power plant?

Way back in 1984 there would have been “travelers” to inform intelligence agents about a disaster. In 2018 terms there instead is monitoring of social media accounts to start the discussion about the tragic sinking of a massive dock. 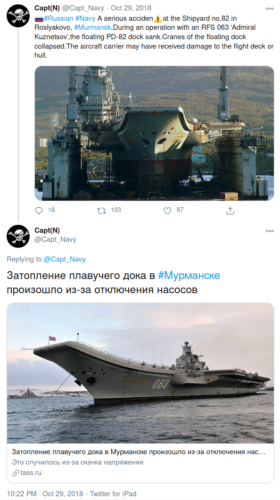 And from that angle the 2018 news of disaster reads at first like it should get a footnote similar to the 1984 official commentary: Russia continues to be known for operations fraud, “carelessness” and decay.

Maybe there’s nothing more to this story than just people discussing a tragedy resulting from bad safety practices:

…the dry dock has itself had repeated problems with its aging technical equipment, including the electricity system…

Reports mentioned sub-par maintenance of a huge floating platform built by Sweden in 1980, neglected since, with possible criminal charges for the private owners of the dock. Rosneft bought 2015 for its “oil operations”, which in terms of Russian oligarchical corruption means transfer of government funds to someone’s pockets by forcing major Navy repairs into private hands.

The subsequent lawsuits probably say something like Rosneft cut safety corners to increase profits, as one expects from an unregulated/monopolized market — the only dock big enough for the Russian navy to do repairs on its fleet.

It’s an unbelievably unfortunate operations situation coupled with a design flaw someone must have known about for a long time, especially given a history of having unstable power sources in that region.

Yet such a vulnerability makes it too tempting to not float the idea that this is also was fertile ground for someone hunting for easy cyber attack targets.

Again, the basic narrative since 1984 of Russian carelessness still makes sense. Yet early 2018 also saw a series of electricity “hacks” on America purported to originate from Russia.

For a little context from 2018, two years earlier the U.S. loudly warned that its “military hackers have penetrated Russia’s electric grid…for cyber attacks that could turn out the lights…”.

A month after these 2016 U.S. statements, the Russian city of Murmansk experienced a massive energy blackout. It was blamed on an intentional short circuit at the Kolenergo substation.

The acts were done near a city block in the street of Knipovich, Nikora said in an extraordinary meeting in the regional Staff of power security. It is not clear who was behind the acts, nor whether it is consider as deliberate sabotage or result of an accident.

That’s kind of important context, given how two years later rolling power outages hit the same region, sinking the largest dock in Russia and crippling their global navy operations. Even if not a cyber attack, you can’t say a fail-unsafe design makes any sense for the dock.

The most interesting run-up to the power outages in 2018 perhaps starts months earlier when the Wall Street Journal reported that Russia was trying to boast they had breached America’s power grid:

Hackers working for Russia claimed “hundreds of victims” last year in a giant and long-running campaign that put them inside the control rooms of U.S. electric utilities…

It was thus after aggressive hacking claims by Russia that it faced:

…several cases of power outage all over the [northwest] region, including in the cities of Severomorsk and Murmansk…

These power outage cases not only crippled Russia’s ability to manage its fleets by sinking their largest Naval dock, they also damaged Russia’s only aircraft carrier in the dock failure (Admiral Kuznetsov, which had been serving in Syria to infamously carry out air strikes yet losing two aircraft during routine landings).

Again, it has to be emphasized Russia earned itself a reputation for carelessness and predictable self-inflicted disasters. There may have been no cyber attacks at all and disasters still could have happened from decay or “incredibly easy” physical attacks.

Just a year after the dock sank, that same one and only aircraft carrier caught fire during repairs, blamed on a short circuit.

The Admiral Kuznetsov, Russia’s only aircraft carrier, caught fire today during repairs in Murmansk. While officials of the shipyard said that no shipyard workers were injured, Russia’s TASS news service reports that at least 12 people (likely Kuznetsov sailors) were injured, some critically. In addition, three people, possibly including the third-rank captain in charge of the ship’s repairs, are unaccounted for.

The Kuznetsov has had a long string of bad luck, experiencing fires at sea, oil spills, and landing deck accidents…

It’s hard to prove a cyber attack hit a country causing a power outage when that country is so bad at operations, but that’s exactly the point. The Stuxnet attack targeted a facility that already was suffering under something like a 30% failure from rust and basic operations failures.

This is why timing of the 2018 power outages in Russia shortly after its boasts about hacking can make for interesting reading. Despite the lack of any real details or news from the cities in Russia affected, I’ll be surprised if historians don’t find out more here by poking around.

Perhaps US Admiral Stavridis put it best in October 2016 when he quoted a Russian proverb: “Probe with bayonets. When you hit mush, proceed.”