People keep saying Washington DC violence from militias is a new thing to prepare for, yet who remembers 1960s and early 1970s saw repeated attacks on US capitol by violent domestic groups?

The FBI records have details of the groups involved, including one that used bombs on Capitol Hill, and how they were defeated (presumably then fading from memory).

…credit for 25 bombings—including the U.S. Capitol, the Pentagon, the California Attorney General’s office, and a New York City police station.

Hearings by United States Congress, House Committee on Post Office and Civil Service in 1971 give a pretty succinct description: 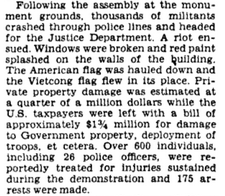