Were nautical engineers in denial (pun intended) when they created a massively massive ship that has the grace of a drunken sailor on ice?

All the fresh reports of a ship named Ever Given blocking the Suez Canal seem to underplay the most important point. This ship built in 2018 was in a similar accident in 2019:

…the cargo ship ran into a small ferry moored on the Elbe river in the German port city of Hamburg. Authorities at the time blamed strong wind for the collision…

It wasn’t a small ferry that was hit. This ship is massively massive at 400 meters long and 59 meters wide. Everything is small compared to that. Do you know how wide the massive Suez Canal is? Only 286 meters. 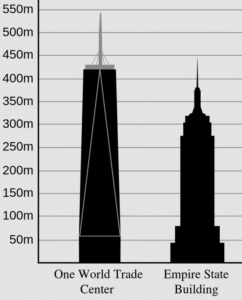 The prior crash suggests it’s a known design flaw in handling wind (and by that I’m including bridge comms) that should have been fixed long ago. Here’s analysis from 2011 saying wind is a major factor in container ship engineering only getting worse:

…the amount of hours with troubling winds and loss of productivity on a container terminal due to wind will double. Increase of wind pressure The increase in world sea trade causes an increase in port equipment and vessel size. For example, the 9500 TEU container vessel commissioned in 2005 is almost ten times the capacity of the first generation container vessels of 1962. This also affects the size of the cranes. The effect of wind increases due to larger wind surfaces of cranes and vessels, but the effect is also augmented because of the extra wind speed at higher altitudes.

And here’s a graphic from analysis in 2013 that modeled steerage loss in rivers due to even light winds.

In other words, the ship itself is too tall to avoid thinking of itself as a sail and then stacking containers on top literally becomes an act of creating a permanent sail with predictable effects in wind (e.g. as demonstrated in 2012 wind tunnel experiments).

The winds in the 2019 Germany crash were reported as force seven with gusts of force eight (30 knots with gusts to 40 knots). That’s a bit strong (25 knots is the top end of most sailors’ comfort level) but more importantly it was a foreshadowing.

The sort of obvious problem is that engineers have come up with designs so tall that in just 30 knot winds (which seems to be the same wind force in Egypt 2021 as in Germany 2019), despite traveling at a blazing 12.8 knots, it couldn’t steer a reliable path.

That’s why I say their ship operated like a drunken sailor on ice, twice!

This is a metaphor for engineering mismanagement by not thinking ahead about design decisions relative to the very well known natural environment.

Bigger is not better. Also patches need to happen faster. Lack of planning and a failure to respond to earlier warnings leads to… bigger disasters.

Some reports include the point that the ship experienced a power outage when it lost steerage. Others dispute this. Power loss maybe complicates matters but the ship should still have had fine steerage (let alone ability to drop anchor).

Some reports include the point that the wind caused visibility issues because of sand. This doesn’t sound right to me as the ship ran aground precisely on 23 March 05:45am and sunrise on this day was 05:50am. Visibility before sunrise?

It comes back to the ship was so wide, tall and long it lacked an ability to stay pointed at 12.8 knots of momentum in flat water. I mean 30 knot winds would be unusually strong for the canal (let alone gusts to 50 knots), which reportedly sees 5-10 knots year round, but it’s something that engineers should have planned for especially after the 2019 crash.

Steerage in constrained space is a major problem for nautical engineers, such as a river where the ship moves too fast for micro course corrections and too slow for major course corrections (and of course lacks brakes). For a ship this size 30 knot winds wouldn’t mean a thing in open water, but in a river underway in-between slow and fast controls it’s a recipe for disaster.

This is how the drift looked, tracked in a VesselFinder video:

The ship starts to slide to port and compensates with over steering towards starboard. Its stern then spins towards port, which maybe is expected from wind pressure changing, driving the bow increasingly starboard into the canal bank.

Also let’s be honest, 12.8 knots sounds unusually high for a ship in this canal. What was it thinking? That decision rendered her bow thrusters and low-speed controls useless (as speed increases thrusters become less effective and rudders become more effective) meaning it was going so fast it needed lightning speed reaction times of complex geometry by human pilots to course correct.

Perhaps that’s the real investigation here? (Not saying automated pilots would do better, but calculations of known factors like wind speed, direction and rudder/engine adjustments can be made faster by machines)

Now for the opposite perspective. People say they didn’t see such a looming disaster coming.

Images showed the ship’s bow was touching the eastern wall, while its stern looked lodged against the western wall – an extraordinary event that experts said they had never heard of happening before in the canal’s 150-year history.

Nobody has heard of a ship going sideways so far that it touches both banks? This ship is so big it had very little time before it was touching both. Many ships have certainly run aground (e.g. 2017 another very new massive ship was stuck in the Suez).

I guess you put those two facts together and the past could have easily predicted the present.

Note the unlimited fetch (unobstructed path) for wind along the canal in the images where the ship is stuck. A 30 knot wind is a much more solid force when there are no trees or buildings, as disturbances in flow significantly reduce power.

Being aground as she is, all the way up on the eastern bank, and she’s listing to port, it’s very hard to be able to pull her off. They’re in a very dangerous, precarious position too, with both ends of the vessel on the beach there’s a potential for the vessel to sag in the middle. If they cannot get her off that position with the tugs, they’re going to have to start removing fuel out of her, and then containers, but the difficulty with getting the containers off her is she’s so high, so tall, that it would be very difficult to get the correct size cranes in there.

The ship being so tall also impacts the ability to off-load it to get it off the ground. Cranes afloat probably will not be tall enough (because if they were tall enough they also might be blown over by winds).

And the ship being so long means it could end up sagging with both ends aground but the middle in deep canal water.

Pressing tugs against the middle of the ship while the bow and stern are stuck on land could be a structural nightmare. Did engineers think about that too? I would bet not.

This story has many lessons and insights about engineering that hopefully will be studied in great detail to change the future in terms of ethical product management. It is almost exactly a repeat of the kind of thing meant to be avoided by studying the 1940 collapse of a bridge during high wind.

Just four months after Galloping Gertie failed, a professor of civil engineering at Columbia University, J. K. Finch, published an article in Engineering News-Record that summarized over a century of suspension bridge failures. Finch declared, ‘These long-forgotten difficulties with early suspension bridges clearly show that while to modern engineers, the gyrations of the Tacoma bridge constituted something entirely new and strange, they were not new — they had simply been forgotten.’ … An entire generation of suspension-bridge designer-engineers forgot the lessons of the 19th century.

The lessons forgotten here are obviously related to how a boat on water with a giant sail (fixed or otherwise) tends to sail like a sailboat when the wind blows. The solutions, pun intended, will be found in improved bridge resource management.