A white woman posts a racist comment on LinkedIn. The target of the attack posts the comment in plain view for review, as his profile is experiencing a lot of harassment and hate speech.

Such obvious hate speech as a violation of the site terms and is reported as such. What happens next?

To be clear here, any student of basic history knows the racism this comment is delivering. 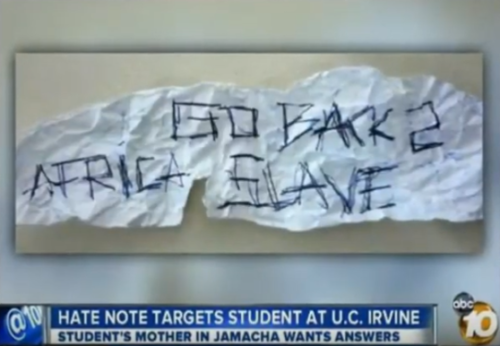 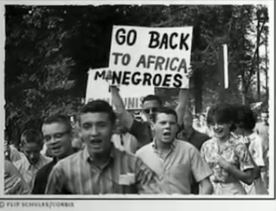 Such a “go back” attack method, even one masked as “there’s always X physical location” is unquestionable hate speech. It fails the most basic test.

Probable Cause Found Against Duval Circuit Judge… accused of telling his staff attorney in a private conversation that African Americans should get back on a ship and go back to Africa.

Clearly it is NOT actually talking about any location because it’s an encoded threat targeting someone’s place in society (e.g. racism).

The comment isn’t removed, however. Instead a “GR” operating the LinkedIn Help account responds publicly to the target of the attack with a comment saying “Racism has no place on LinkedIn”.

GR appears also to be asking for help, as if the post and comment are in doubt or they can’t discover on their own with the already provided details.

I find this a strange response since it takes me less than a minute to find the original post and the comment.

Then as a test of the GR claim, and to confirm what others already have stated (they filed a report and were denied) I file a report of racism and immediately get this response from LinkedIn. 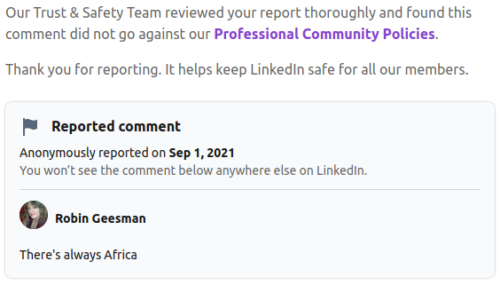 How can LinkedIn not rule as such? This “go to” attack has no value other than incitement and harm, obviously used as targeted harassment by a white woman.

As you may recall, I recently wrote up a post on obvious disinformation accounts being coddled by LinkedIn.

Let’s now take a closer look at the account sending this racist attack.

She “likes” a tone-deaf and racist comment one day prior, fraudulently claiming “There is no such thing as racism”

Saying there is no racism is like someone saying they are happy to ignore the racism because THEY don’t benefit from ending racism. It’s an incredibly selfish and hateful perspective, a form of extreme “individualism”, based on falsehoods that cruelly disregard the well-documented pain and suffering of others.

She also “likes” a comment that white people had ancestors who were “prisoners of the South in the Civil War” claiming “no need to thank them, that is what we do for fellow Americans”

I’ll unpack it here simply. A white man posts that if your ancestors were slaves, don’t ask for anything (reparations) because you should (like him) accept bondage under tyranny as a form of service/servitude to “fellow Americans”.

She also “likes” an obviously fraudulent comment that white people who had the privilege and choice to immigrate to America are somehow an equivalent to people violently forced into slavery.

It literally starts by trying to paint white immigrants as the real victims in America because they might be crucified for saying something incredibly stupid as though it “has to be said”.

This comment also peddles the racist trope that whites have no responsibility for the systemic racism they benefit from by ignoring.

We could go on and on, yet it’s safe to say if you post a racist comment denigrating blacks this Robin Geesman account will be ready to pile on before posting her own racist opinion.

Her comment is far more clumsy and obvious than the other racists, but it appears that she had been liking all the racism as a kind of wind-up before posting her own over-the-top racism.

This is in effect what a mob of white racists looks like, collectively attacking a LinkedIn profile within LinkedIn.

Perhaps most insightful, however, is that her profile otherwise is being filled with lots of generic themes of respect for others. It reminds me how Nazis would talk up the need for respect and order while practicing the exact opposite — constant destruction of respect and order.

Obviously she intends her stream of constant pleas for safe spaces only towards people she thinks look like her, as if black people must not be allowed to participate, have a voice or otherwise make her feel uncomfortable.

Some of her most recent “likes”:

Any “go back to X” comment is a gross violation of her own “liked” principles here, as she tried to humiliate someone based on race after they said something she disagreed with.

The cognitive blindness is palpable. And to top it all off, it is no surprise that alongside her “safe space” memes comes a lot of military and police worship as well.

To put it another way, we see here a pretty obviously racist profile on LinkedIn. It confirms an obvious racist comment and its likes of other racist comments are all consistent with a “professional” presence of entering other people’s space to be racist without consequence.

LinkedIn claims to prohibit racism yet formally disagrees with removing it when obvious racism is flagged; they easily can be found protecting white insecurity groups sending racist harassment messages in a “professional” space, but why?

Not only is the robot that drives Facebook (and other platforms) biased in favor of inflammatory content, but the company has clumsily intervened to bias it further.

Food for thought, given that LinkeIn under the Microsoft umbrella formally announced joining the voluntary EU code on hate speech:

Microsoft-owned LinkedIn has committed to doing more to quickly purge illegal hate speech from its platform in the European Union by formally signing up to a self-regulatory initiative that seeks to tackle the issue through a voluntary Code of Conduct.

In statement today, the European Commission announced that the professional social network has joined the EU’s Code of Conduct on Countering Illegal Hate Speech Online, with justice commissioner, Didier Reynders, welcoming LinkedIn’s (albeit tardy) participation, and adding in a statement that the code “is and will remain an important tool in the fight against hate speech, including within the framework established by digital services legislation”.

Indeed, the head of trust and safety at LinkedIn (Paul Rockwell) publicly “describes the company as explicitly ‘anti-racist'”.

Is there a clear case of violation here?