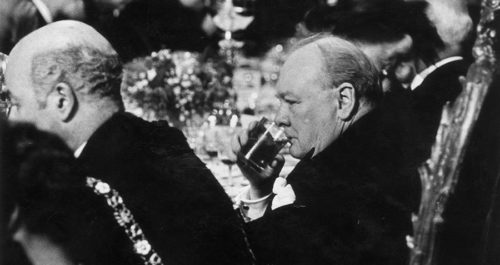 This very typically biting and insightful anecdote about Churchill comes from a military history book describing Allied preparations for D-Day:

The General probably should not have been shocked. Everyone surely knows Churchill was known for his failure to admonish Mussolini, right?

Mosley was to put it more concisely later when he repeated that the British Fascists wanted to turn Parliament ‘from a talk-shop to a work-shop’. When Churchill praised Mussolini’s Italy for its economic realism, it was of course the British Chancellor of the Exchequer envying the Fascist dictator for the room for manoeuvre which the absence of an effective opposition gave him.

The offensive declarations of January 1927 were of a different nature, in that they clearly justified the introduction of Fascism as a bulwark against Bolshevism.

However, a careful reader of history will note that Churchill preferred death to either Fascism or Bolshevism and thus was crudely thinking of himself as above either.

…his Commons speech of 14 April 1937 he suggested that a self-respecting Briton would face death rather than accept ‘to choose between Communism and Nazism’ :

I hope not to be called upon to survive in a world under a government of either of these dispensations.

Self-respecting here is taken to mean a Briton who hasn’t stooped so far as to allow extremism to take hold. Or to put it another way, as I described in a 2014 blog post, fall victim to what Germany experienced:

The stock market crash of 1929 led to extremely heated conflict by radical groups trying to split votes; intellectual communism versus ultra-nationalism. This led to violence, which led to mob rule by fascist militia and 1932 end of the republic.

Britain arguably rested upon a representative government that had increasingly allowed for mass dissent. And while it was far from an ideal system it didn’t end with abrupt violent revolution in the “European” way.

Seems almost natural for Churchill to claim to appreciate the very thing that he also detested so much, through dark sarcasm and sharp wit.