March 1, 2022 Google announced a series of “high” security fixes as part of its “rapid” response to keep users safe from harm, which are being registered in some quarters as a critical upgrade to version 99.0.4844.51.

CIS reported it this way, telling government and businesses to treat it as a HIGH risk situation.

Successful exploitation of the most severe of these vulnerabilities could allow an attacker to execute arbitrary code in the context of the browser. Depending on the privileges associated with the application, an attacker could view, change, or delete data.

The roll-out from Google was almost immediate for Linux and Windows users, yet days later some Apple users still are waiting to get the new version.

As of right now, macOS shows version 98 as current. 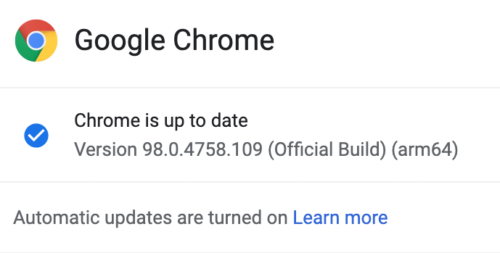 I’m not seeing anyone reporting this as Google not patching Apple systems, and that’s not even to get into an exploit in the wild for Chrome 98 (prior version).

At this point it seems safer for Apple users to remove the insecure version of Chrome than to run it after public disclosure of the vulnerabilities, no?