A new SOFREP article, which reminds me of US anti-tank innovations in the 1980s Toyota War, offers us some plain numbers to explain why Russian tanks are being so easily defeated.

Only $32K needed for the reusable Ukrainian platform that takes out multiple tanks. Such economics underscore unmistakable levels of incompetence in Russian operations, as seen in their heavy financial and troop losses.

A reputable source of these destroyed tanks is Oryx. So far, they have recorded that some 312 Russian tanks have been destroyed during the almost 3-month-old war, with another 17 damaged, 49 abandoned, and a whopping 222 captured. More so, the Russians aren’t looking too good as their tank manufacturer Uralvagonzavod had halted production and servicing due to a low supply of parts and foreign components and they are forced to draw tanks from repair depots and put them back into operational condition.

Russia appear as inept with technology and planning as the Nazis were, and might have been better off invading on horses as the Nazis did. At least it would have cost less.

But seriously, check out how the 1980s Toyota War was described at that time. Inexpensive light vehicles fitted with heavy weaponry and ridden hard, like horses.

Small groups of Toyota desert vehicles, with 106-mm recoilless rifles mounted at the rear, wheel and charge like cavalry in the vastness of the Sahara. Outriders hang from the sides, firing their AK-47s with deadly grace. Very young and therefore very brave, the men of these small fighting units, or escadrons, whip their Toyotas’ flanks until the vehicles seem to snort and froth at the bit like fine-blood Arab stallions. The young soldiers move silently, without war cries except for the high-pitched scream of their engines. […] A French officer says that the Goran are still the finest light cavalrymen in the world. But now, he adds, “they are mounted on Toyotas instead of horses.”

Does that really sound much different than reporting from Ukraine in 2022?

Speaking of animal metaphors, I’m not sure who made this video, but it’s quite good:

Anyway, the point is that anybody and everybody including both Ukraine and Russia for decades have been talking about evolution in light, mobile attack platforms. 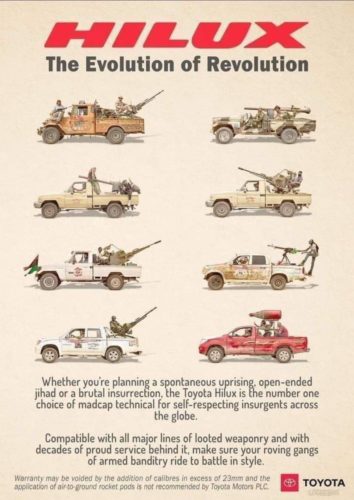 So guess who seems to have planned not at all for an obvious “operationally unsuitable” reality in their invasion of Ukraine?

Apparently the old school “insurgent” marketing brochures (or actual lessons since the 1980s) didn’t give a big enough clue to the Russians despite significant foreshadowing… and this is the second time I’ve written here about them ignoring history. It reminds me of American generals in the Vietnam War being accused of basic ignorance.

It was not so much that American commanders read the wrong book on the art and science of war as it was that, in too many cases, they had read no such book at all.

We’re just talking about recent history too, not Major Bagnold’s 1940s Long Range Desert Group (LRDG) vehicles: “one of the most cost-effective special forces in the history of warfare” that ran circles around Nazi armor.