The WSJ reports air travel reliability has deteriorated so much that business communities are scratching their head about why they can’t get on a modern high-speed train instead.

This summer’s air-travel disruptions are leading some business travelers to change plans and hit the road.

But is “hitting” deteriorating infrastructure of roads to just sit in long traffic jams any kind of real upgrade from air travel?

It says a lot that people believe stepping into the infamous security theater of a Chertoff checkpoint feels worse than driving — something incredibly stressful, dangerous and expensive. Even pilots try to warn potential customers that being in hell for up to six hours is better than American air travel.

“Drive when you can,” Tom Kubik, a retired pilot with 42 years of experience, told budgeting website Humble Dollar. “We draw a six-hour drive circle around our house. If we’re within six hours, we’re in the car. The airport experience and the hassles associated with flying these days make driving a much less stressful trip. That’s true even with gas prices where they are today.”

Rental car companies like Avis are of course ready to get behind dumping on air travel with tone-deaf logic such as this.

Opt for driving if: You dislike the crowds, lines…

Do we know what is absolutely full of awful crowds and lines?

Based on the overall findings, the U.S. ranked as the most traffic-congested developed nation in the world, with American drivers spending an average of 41 hours a year battling traffic… 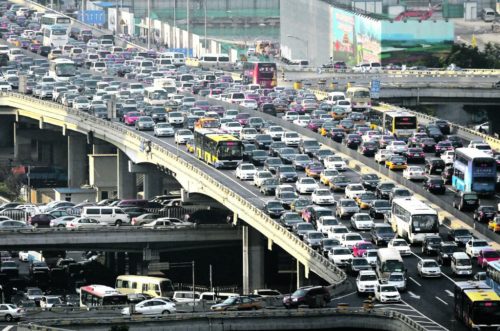 The American driving model is basically a racist death trap that gets exponentially worse when things go wrong.

Aside from their weaknesses as evacuation conduits, highways are dangerous in their own right. Road accidents are a persistently high cause of fatalities in the United States. And, as the traffic jam in Virginia shows, highways are not only bottlenecks but traps. With the right circumstances—an accident, a stopped tractor trailer, the wrong kind of weather—motor vehicles can move neither forward nor back, leaving people stuck unless they abandon the limited shelter their cars offer. Worse, most emergency response is also based on motor vehicles. Stretches of highway may become largely inaccessible to ambulances or buses for evacuation, making assistance that much more difficult.

Yes, I said racist. America’s interstate highway system was a race-based design by VP Nixon (under President Eisenhower) for segregationist planners to destroy and block non-white prosperity — today experts in transit design literally call it a network of “death corridors“.

This only gets worse with racist companies like the unsafe-by-design Tesla, which pretend they are doing something innovative while obviously repeating the worst engineering mistakes in history and killing far more people.

All that sets up any intelligent business traveler to look hard at America and ask where’s the train?!