As many people are just starting to realize (since Ye thinks it helps him politically in America to say it directly) Republicans support Elon and Trump because they like Hitler a LOT. 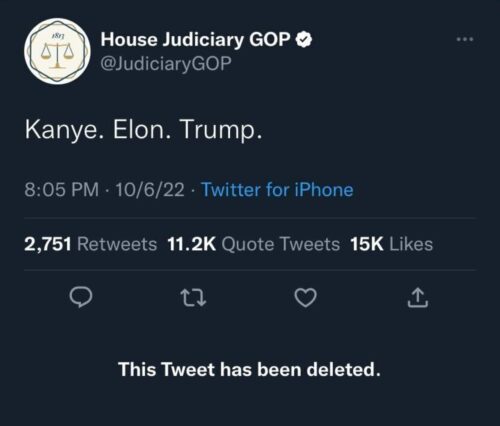 The GOP only just deleted this now, weeks later. Why now?

When Ye tweeted on October 8 that he wanted to go “death con 3 on THE JEWISH PEOPLE,” the House Judiciary GOP’s tweet stayed up.

Stoking hate seemed just fine for the GOP until…

Ye is now saying very openly to prominent American men who clearly like Hitler, that he likes Hitler too, and thus wants to dine with them and be counted among the worst of them.

Today, after West explicitly praised Hitler on conspiracy theorist Alex Jones’ InfoWars podcast, the tweet came down. “I see good things about Hitler also,” Ye said. […] Every human being has something of value that they brought to the table, especially Hitler.”

That has apparently ripped the hood off, exposed the inner voice of the GOP.

Ye isn’t pretending to “know nothing” about men who love Hitler.

That is something of a problem for tongue-twisted fascists who are used to comfortably hiding in the open. As I’ve written before, being exposed for who they really are — being identified and responsible — worries the American disinformation artists.

A truly horrible human who deserves no praise (Andrew Jackson) even can have his portrait put up prominently in the White House, while hinting it symbolizes political methods of Hitler!

“Like [Andrew] Jackson’s populism, we’re going to build an entirely new political movement…. We’re just going to throw it up against the wall and see if it sticks. It will be as exciting as the 1930s.”

Jackson represents deception, corruption, slavery and genocide. Calling him their inspiration for a “new political movement…exciting as the 1930s” means only one thing — Hitler. Get it? “Throw it up against the wall and see if it sticks” is a nod to the “permanent improvisation” mindset of Nazism.

There’s always a line, even among these men who claim there’s never a line. In this case the Republican party regularly embraces Nazism and dances around the subject openly, while it quietly dictates that nobody ever should use the word Hitler.

America First, infamous before and even during WWII for loving Hitler, tells its followers today to wave the racist Betsy Ross flag or their “Simply Southern” Confederate battle shirts… yet leave their swastikas covered or hidden. The line is meant to be sure someone doesn’t ruin the charade. It’s a curious thing really, given what is wrong with Hitler, when Jackson gets his portrait put up, or a government representative from Iowa floats an enemy flag on his desk.

“America First” simply is a reference to Hitler studying American leaders from places like Boston, San Antonio, Detroit or DC to copy their methods of state sanctioned crimes against humanity.

Nuremberg, Germany was the well documented place where Nazis said they could improve racism because they’d be more refined and less obvious than “barbaric” Americans oppressing Blacks. German Nazi meetings very openly used American history as their blueprint. Yet Americans today bend over backwards to claim ignorance of this very strong connection.

Zyklon-b is the very awful sounding German word Americans say when they want to ignore the fact that Germany copied deadly pesticide use on people from America.

Auschwitz infrastructure looks like Wilson’s racist border control setup in Texas for a simple reason — it was an intentional copy, right down to the “showers” turning into ovens.

That connection to Nazism making it the second act is not what is taught in schools however, where America First and “great again” get flaunted as if not simply praising Hitler.

Ye is throwing venerable “know nothing” tactics upside down, similar to how almost a decade ago he took others’ low key antisemitic mumbling present around American music and turned it out loud and proud… into a 2005 Grammy award.

I mean you can’t say his fast paced strategy of becoming more obvious in hate speech hasn’t paid for him in the past.

Ye openly loving an infamously genocidal German fascist shows he isn’t as afraid (or dishonest) as others to spread the hate they mean, and sees it as his ticket to share in their success.

Perhaps next he will ask America if Hitler could love Ford’s ideas and try to put them into practice with Nazism… why would it be ok for Elon to spread violence and hate speech like Ford (and Hitler) but not for Ye?

Ye is an American celebrity being far more direct and honest than Elon and Trump who have praised Nazism and Hitler while trying to pretend they weren’t.

In the end, they’re all wrong and should’ve been shut down a long time ago. Ye’s comments about Hitler are disgusting and wrong, especially as even subtlety of Elon and Trump caused unnecessary deaths and harms. Things will only get much worse if the ugly ignorance of fascism goes unchecked, if the GOP sentiment isn’t stopped now. Deleting that tweet isn’t nearly enough.