It seems only fitting to hear Russia not only is running out of drones due to lack of planning, its remaining drones don’t work due to… what UNIAN hints was a lack of planning.

November 17th was the first day of snow in Ukraine and also the last day Russia was able to launch its Iranian supplied “kamikaze“.

In related news, Russian soldiers also aren’t doing well with winter. They are reportedly laying in primitive trenches dying or dead from starvation and hypothermia faster than the Ukrainian drones can put them out of misery.

This of course looks familiar to those who study Nazi inability to plan or build anything sustainable.

…according to James Holland, author of the three-volume history “The War in the West,” when it came to the operational level of World War II—the nuts and bolts of producing weapons, supplying troops and other logistics–the famous Nazi war “machine” was anything but efficient. It wasn’t even really a machine.

Russians used to flaunt winter weather as their thing, a rugged (General Frost) reality to their culture that stopped Nazis cold. 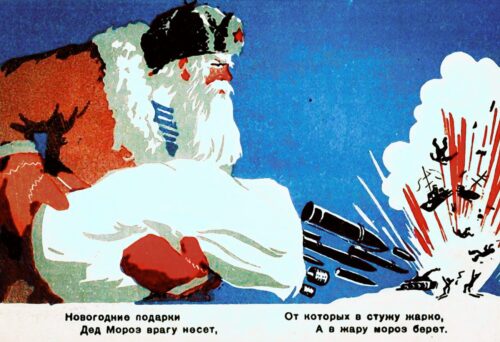 WWII winter however was not magic. It involved the same sorts of things being seen today. Russia didn’t learn the right lessons and is failing at simple logic and truth (logistics).

Reading November 2022 news that Russian drones won’t work in Russian weather reminds me of the fact that 75% of the Nazi army was powered by horses expected to freeze to death in 1942.

Deception and lies may have floated Putin in a sea of corruption all the way to the top, but they’re no match against the simple physics of war.

Nearly 100,000 Russians are reported dead after invading a country that was expected to roll over. Foreign military strikes have reached 100 miles of Moscow while Russia at same time has to ground its drones.

Seems unlikely such severe Russian failures in strategy and planning can be denied much longer.

Update Dec 11: a brief break in the cold temperatures saw Russia unleash as many drones as possible, further proving the Ukrainian point about weather. Iran-based designs operated by Russia can’t handle drag from frost on wings.