The conspiracy theory of “white genocide” has been a staple of the racist far right for decades. It has taken many forms, but all of them imagine that there is a plot to either replace, remove or simply liquidate white populations.

South Africa and Zimbabwe in particular have exerted a fascination on the racist far right because in the mind of white nationalists, they show what happens to a white minority after they lose control of countries they once ruled.

The “Genocide” of White Farmers is a lie. It is a cruelly calculated lie designed to help white supremacists murder blacks. What seems to be missing from the political science of this story is the history of white farmers killing blacks under false claims of keeping stability.

That “lose control of countries” phrase is the big clue that should take readers directly to my recent Secret SAS Missions in Africa post, where I explain how South Africa and Zimbabwe (Rhodesia) had racist far-right governments committing acts of mass terror and calling it “protection” for whites. These countries dehumanized blacks and characterized anyone with dark skin as perpetual threats to the safety of white women and rural folk (farmers, or “Boer” in Dutch).

Psychological Operations used phrases like “See the woman crying. She has just learned that the communist terrorists have infected her with V.D.” to dehumanize blacks and stoke fear of neighboring countries:

At the time Rhodesia went to war against its own people, British recently had won similar wars of oppression in Kenya and Malaya. Rhodesian white supremacists were under the impression they could achieve the same results using similar tactics. They failed. British tactics and military aid used by the Rhodesian forces failed to maintain white power.

People reading the news today need a dose of reality on what the white supremacists in southern Africa really were doing to any blacks who dared attempt to enter government service and speak of self-determination.

The whites, to this day, believe the government propaganda, that the people were given brick houses with running water, schools and clinics. In reality, the government provided nothing except the fence and transport. People were dropped on the dirt inside the fence in the coldest time of year (August, 1974) without so much as a stick or a piece of string with which to build a shelter. For the first month, there was continuous wailing as funerals took place, mainly of the elderly, disabled and newborn, who died of exposure.

I’m talking about acts of genocide by whites while claiming themselves both the saviors and victims, often using “we hired blacks to fight along side us, and some of them became our friends” as their proof they did not wage a racist campaign:

Over the next twelve years, Graham’s role in acting out the genocidal destabilization policies of the Rhodesian white supremacist regime in neighboring Mozambique resulted in shocking crimes against civilians: one million people killed (60% children), 200,000 children orphaned, 250,000 children separated from their families, 1.7 million people (over 10% of total population) fleeing to neighboring countries and 4.3 million people displaced.

When whites abruptly lost their obviously racist and wrong wars to prolong colonial (white supremacist) rule, they immediately set about destabilizing African countries with pseudo-operations and false flags to kill as many blacks as possible and blame it on the blacks themselves.

Fourth graders until the 1970s learned how living on a plantation was “one of the happiest ways of life.” […] And this is what Alabama taught its children about the Ku Klux Klan: “Many of the Negroes in the South remained loyal to the white Southerners. Even though they had lately been freed from slavery, even though they had no education, they knew who their friends were.”

The truth is Rhodesian national conscription actively excluded non-whites because a white supremacist government wanted to avoid any arguments for civil rights that spring naturally from putting “citizen” requirements upon the non-white population. A South African WITS seminar by Louise White sheds some light:

At the time of [Unilateral Declaration of Independence] (UDI) national service for whites, Indians and Coloureds was four and a half months. Coloureds and Indians served in two units, the Reinforcement Holding Unit and its supplementary Protection Companies, which primarily provided transport and supply. In 1978 these units were combined into the Rhodesia Defence Regiment. Once the guerrilla war began, and certainly by 1972, conscription of white Rhodesian youths intensified. The basic outlines are that by 1972, all white males 18-25 were required to undertake nine months “service training” in the army or the police.

So who was willing to fight, or even register to fight, for the Rhodesian Front, for the idea of white privilege maintained against majority rule? Many Rhodesians believed that it was the new arrivals – recent immigrants who had benefited from the assistance packages of the first years of UDI — who would risk life and limb for the privileges Rhodesia offered. Rhodesian born Angus Shaw was scathing: the men who had exchanged council housing in the East End of London for a house in the sun with servants were willing to pay the price, even if it meant “burning down the odd village” when they were called up.

Outside the country, the issue of new immigrants was eclipsed by that of foreign soldiers. These men were, according to most writings on the war, professional soldiers from Great Britain and large numbers of Vietnam veterans from the US, Australia and New Zealand and few ex-legionnaires from continental Europe who came to fight for Rhodesia. Some came because they wanted adventure; others found it the best career option available to them.

And if anyone ever asks you about the significance of airplanes being shot down around Rhodesia, immediately ask them who has been held accountable for the 1961 incident when “in an effort to secure a cease-fire, [UN Secretary General Hammarskjöld] left by air for a personal conference with President Tshombe of Katanga. Sometime in the night of September 17-18, he and fifteen others aboard perished when their plane crashed near the border between Katanga and North Rhodesia”.

Many believe the plane had been shot down and to this day the US and UK government refuse to release signals intelligence on the subject. Hammarskjöld was despised by white supremacists for his support of human rights and self-determination:

From generations of soldiers and government officials on my father’s side I inherited a belief that no life was more satisfactory than one of selfless service to your country – or humanity. This service required a sacrifice of all personal interests, but likewise the courage to stand up unflinchingly for your convictions. From scholars and clergymen on my mother’s side, I inherited a belief that, in the very radical sense of the Gospels, all men were equals as children of God, and should be met and treated by us as our masters in God.

600,000 CHILDREN KILLED IN MOZAMBIQUE was a direct function of recent white immigrants to Africa and their secret foreign mercenaries trying to stop blacks from having any say in present or future government. Another 500,000 people killed in Angola were subjected to the same white-supremacist doctrine to prevent blacks having any control of government, as I explain in my “Hidden Hot Battle Lessons of the Cold War” presentation. 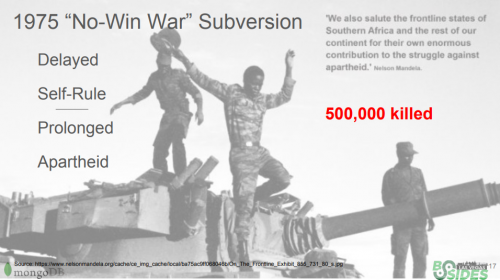 The “genocide” of white farmers reference simply is a dog-whistle for white supremacists. They are signaling to each other intent to assassinate leaders supporting black rule and stoke civil wars among minority populations as “proof” of the supremacy of whites; these Nazis still believe whites should be allowed to move into a territory and forcibly take everything away from non-whites and then violently deny non-whites any say in the matter.