Just 10 hours after the Pearl Harbor bombing of 7 December 1941, Japanese invaded the Philippines and ran into Captain Nieves Fernandez.

…she used her long knife to silently kill Japanese soldiers during the occupation of Leyte Island…. She commanded 110 native who killed more than 200 Japanese with knifes and shotguns made from sections of gas pipe.

Have you heard of her before? Did you realize she was the inspiration for the Wonder Woman comic book character?

As one American soldier in 1944 explained, after Captain Fernandez demonstrated her technique on him, she impressed easily…

The American propaganda machine in 1941 was well aware that the promotion of successful and strong women was essential to winning the war against fascism.

The question really becomes whether Americans could admit to taking the story of Fernandez on Leyte island to create a comic-book version of her, given such lethal and effective reputation of a Woman fighting against the enemy of America.

I believe the answer to be an easy and definite yes. The Japanese military certainly did their part to spread news about this woman’s outsized actions, as it was causing them all kinds of trouble, and Americans turned that news into an iconic image of female heroism.

This deceptively idyllic island turned notoriously dangerous for the invading Japanese troops due to… Fernandez. 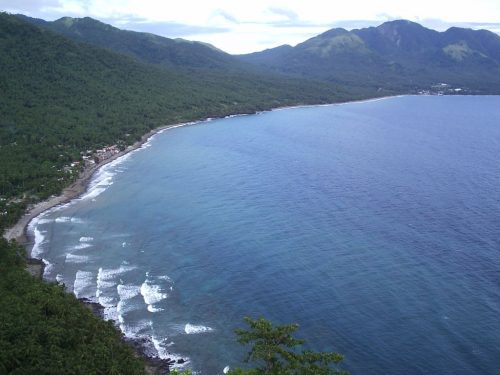 Why would the Japanese amplify her story widely? They thought it would help stop her, by putting a massive bounty on her head.

Again, just to emphasize what an average view of Tacloban, Leyte looks like relative to the “origin” story of the comic book character:

Perhaps it should be no surprise then, given how US intelligence was picking up Japanese bemoaning a “wonder woman” in Leyte, that Americans started saying things like the “best way to fend off critics would be to create a female superhero”.

A fictional origin story of Wonder Woman comic generated its first cover in January 1942 (a month after Pearl Harbor as US propaganda went into overdrive).

Sadly and without explanation, not only was Fernandez never credited, a Harvard psychologist named Dr. William Moulton Marston was instead credited and he made her a “Greek Amazon” white woman from Paradise Island.

In a weird twist to the above real history a new film Wonder Woman 1984 has the American heroine battle an evil villain based on a real-life American con-man whose name rhymes with cancerous-lump:

Enter Maxwell Lord, a self-made mogul-slash-guru played as a sort of insidious mix of ’80s icons…. “Max is a dream-seller…. It’s this character who encompasses a component of the era which is, you know, ‘Get whatever want, however you can. You’re entitled to it!’ And at any cost, ultimately, which represents a huge part of our culture and this kind of unabashed — it’s greed, It’s f—ing greed, of course. But it’s also about ‘How do you be your best self? How do you win?’ So he’s definitely the face of that version of success.”

Definitely a missed opportunity to cast Wonder Woman as a someone more like Fernandez who battles the racism and misogyny endemic to fascism, far more relevant and real than this basic corruption and greed narrative.

A new book called War and Resistance in the Philippines: 1942-1945, by historian James Kelly Morningstar, gives much more context to the significance of this guerrilla story, even suggesting it “brought down Japan”: